Sri Garbarakshambigai Temple is located in Thirukarukavoor. This is also called as Tirukalavur, Mullaivanam, Mathavipuram, and Garabapuri. This temple is dedicated to Lord Mullaivananathar, and his consort Sri Garbarakshambigai Amman. The word Karu refers to the womb, and the word “Ka” means to save, and the word “Our” refers to the town. Thus the meaning of Tirukarukavoor is the place where the womb is believed to be saved. This temple is visited by women seeking boon of progeny. The Linga of Lord Shiva is Suyambu and self-manifested. He is made of hardened mud, so Abishegam or hydrating ceremony is not performed, instead, Punugu Sattam, or covering the deity with aromatic paste is a common practice here. 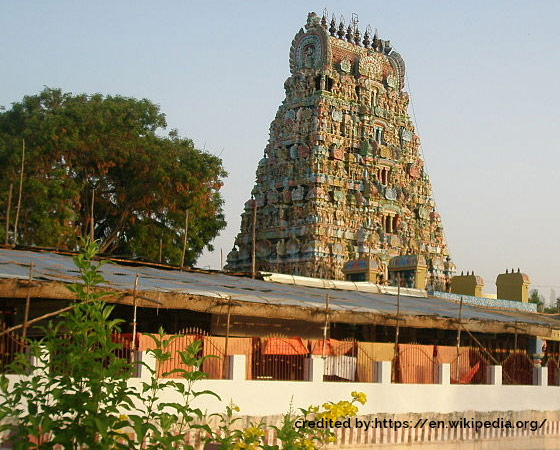 Legends say that Goddess herself comes and supports the delivery. Once, one of her devotees named Vedhikai was suffering out of labor pain, and she was about to lose her fetus too, as her complications regarding the pregnancy were very high. She had no one to help, and out of distress, she cried out the name of Goddess loud. On hearing her devotee’s voice, Goddess herself came in the disguise of an old lady, helped the pregnant woman to deliver a child.

The temple is built in the Dravidian style of architecture. The temple has five tire Rajagopuram, facing east, and has a closed outer precinct. The sanctum sanctorum has the Lingam of Lord Shiva worshipped as Mullaivananathar, located is in the second precinct. The shrine of the Goddess is located parallel to the shrine of the Lord. The statue of Nandi, the animal mount of Lord Shiva is kept opposite to the shrine of the Lord. Palipeeda or the altar for sacrifice, and Dwajasthambam the flag post are located near the entrance of the temple complex. There are separate shrines for Somaskanda, Karpaga Vinayagar and Navagrahas, and Lord Nataraja. The other important shrines are for Lord Dakshinamoorthy, Lord Arthanariswarar, Goddess Lakshmi, Lord Muruga, Lord Brahma, and Durga. There are four water body associated with the shrine, Sheerakundam, is believed to have born out of the sacred cow Kamadenu. The other temple tanks are Sathyakupam and Brahma Theertham. There are several inscriptions found on the walls of this shrine. The long temple corridors are supported by pillars.

Sri Garbarakshambigai Amman cures infertility related problems to women and blesses them to conceive. She also helps them with safe and trouble-free delivery. Sri Mullaivananathar Swamy is worshipped for better health and well being. He is applied with a special paste which is later distributed to people with skin problems. It is believed to have healing properties and helps the devotees to get a good cure. He is worshipped for other health-related issues, which is believed to have a good cure.

How to reach Garbarakshambigai Temple:

The nearest airport to Thirukarugavur is in Trichy at a distance of almost 90 kilometers.

The nearest railway station is at Papanasam, which is almost three kilometers from the shrine.