The Draksharamam Bhimeswara Swamy Temple is located on the Kakinada Road in East Godavari District of Andhra Pradesh, India. The image of the presiding Deity, Bhimeswara Swamy is enormous and measures 14 feet in height. It is made of one large crystal known as a Spatikara Lingam and the upper portion is in white color which is believed to symbolize Ardhanariswaran Tatwam. The literal translation of Draksharamam is â€˜Abode of Daksha Prajapathiâ€™, the father of Sati and the father-in-law of Lord Shiva . The female deity is Goddess Manikyamba, the consort of Lord Bhimeswara Swamy. The other deities of the temple are Lord Lakshmi Narayana , Lord Sankaranarayana, Lord Ganapati and the idols of Navagrahas. The temple is considered one of the five most powerful shrines dedicated to Lord Shiva which are known as Pancharama Kshetram. The temple is also considered a Shakti Peetha and the place where one of the limbs of Goddess Sati fell to Earth. Today, the temple is one of the most popular pilgrim centers and thousands of devotees visit the shrine to receive the Lordâ€™s blessings. 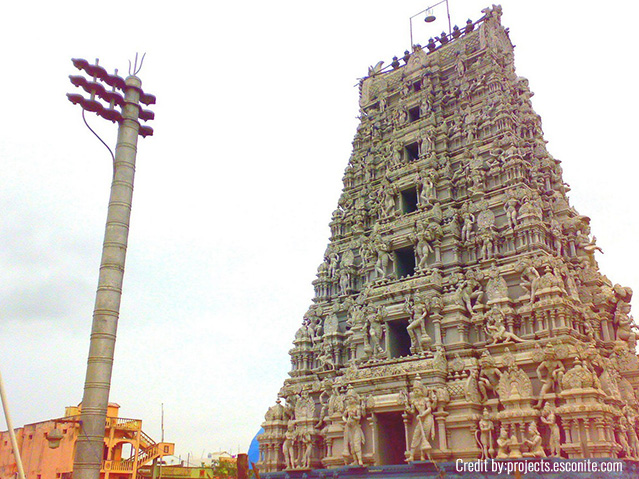 The construction work for the Draksharamam Bhimeswara Swamy Temple was started sometime in mid-800 A.D and subsequently completed in the 11th century. Several renovation works have been carried out and the temple was patronized by many royal dynasties. The temple is a protected Monument, with renovation and maintenance work being carried out by the Archeological Department of India. It is managed by the Executive Officer of the Endowments Department.

It is believed that when King Daksha the father of Lord Shivaâ€™s consort, held a yagna, he deliberately insulted Shiva by not inviting him. Sati was so outraged with her father that she immolated herself in the sacrificial fire. When Shiva heard of this, he was infuriated and placing Satiâ€™s body on his shoulder, he commenced the Tandava dance. The whole of creation came to a standstill by this Celestial event and the Gods appealed to Lord Vishnu to intervene. Vishnu then severed Satiâ€™s body with his discus and the pieces fell to Earth. Draksharamam Bhimeswara Swamy was built on the spot where Satiâ€™s left cheek is said to have fallen.

The temple has many significant features and is one of the few pilgrim centers where the female deity is given equal importance as the male. It is a treasure trove of ancient inscriptions and epigraphs which are etched on the temple walls. The Garbhaalaya or the Sanctum is replete with intricate decor and craftsmanship which represent the cultural grandeur of bygone eras. Constructed on an area of over 12 acres, the Draksharamam Bhimeswara Swamy Temple is surrounded by high walls and houses several shrines dedicated to various Gods within its premises. A magnificent dancing Ganapati welcomes visitors at the entrance and the trunk of Lord Ganesh is turned to the right which is a unique feature. Visitors can also witness the first rays of the Sun falling directly on the Shiva Lingam which is truly a sight to behold. A flight of steps leads to the upper level of the Sanctum to view the upper structure of Lord Bheemeswar Swamy. Another unique aspect of this temple is the presence of a miniature shrine of the main temple with identical replicas of the original.

The Draksharamam Bhimeswara Swamy Temple is built in the ancient South Indian Architectural style and the structure consists of two Mandaps along with two walls. The pillars inside the temple are skillfully and exquisitely carved with intricate patterns that reflect the architecture of those days. Several official registry chronicles have also been etched on the stone walls in various South-Indian scripts. Students of archaeological architecture can also learn much from its unique style of construction and it serves as an inspiration for many. There is a pedestal in the inner Sanctum for Priests to perform the rituals and inside the temple, the ventilation and illumination are quite well planned with the artisans of those times anticipating the needs of the modern era.

Maha Shivratri is celebrated with great enthusiasm in the month of February-March and people from all over the country make a beeline for a visit to this temple to witness the festivities on this auspicious day. Sri Swamivari Kalyanam on Bhishma Ekadasi is also a major festival which is celebrated with great fervor in the temple. Several other occasions are also celebrated here, especially the Shiva centric festivals. The entire complex literally vibrates with religious fervor on these occasions and devotees are immensely benefitted by the positive energy radiating in and around the vicinity of the shrine.

Lord Shiva is one among the holy trinity of Hinduism and worshipping him is said to absolve one of all sins and bring about positive changes in oneâ€™s life. It also liberates one from the cycle of birth and death, and frees one from the clutches of Karma.

Temple Timings: The Draksharamam Bhimeswara Swamy Temple is open all days of the week from 6 AM to 8 PM with a break in the afternoon from 12noon to 3 PM.

On Maha Shivratri , the temple is open throughout the day from 6 AM to 8 PM.

This famous temple is accessible by Air, Rail and Bus Service.

By Air:Â The closest airport to the temple is Rajahmundry, approximately 50 km from the temple.

By Rail: Kakinada, Rajahmundry and Samalkot Junction are the nearest railway stations to the temple.

By Road:Â Several buses connect the temple with neighboring cities. The temple is situated at a distance of about 50 km from Rajahmundry, 28 km from Kakinada Town and 6 km from Ramachandrapuram.