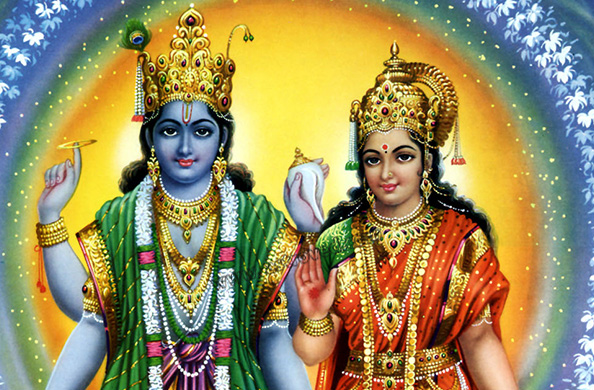 Lord Narayana, also known as Vishnu, is one of the supreme Gods of the Hindu pantheon. He is the God of protection and sustenance of the universe. One among the holy trinity of Gods, he is said to be the physical manifestation of spiritual consciousness. He guards all the living beings on earth and blesses the devotees with long life, peace, happiness, and success. Goddess Lakshmi or Mahalakshmi is his divine consort. She is the Goddess of wealth, fertility and fortune, and is also known as ‘Shri’ or ‘Shridevi,’ the embodiment of auspiciousness and prosperity. Lakshmi Narayana is the Lord, who appears along with his consort, Lakshmi.

The uniqueness of Lord Lakshmi Narayana lies in the fact that this divine pair remains as a single, inseparable entity. Goddess Lakshmi can stay next to a standing Lord Narayana, or be at his service in their heavenly abode of Vaikunta, when the Lord is reclining on the couch of the cosmic serpent Adisesha, in the midst of the ocean of milk, but her principal abode remains the very heart of the Lord himself. This is the reason, the Lord is also known as Shrinivasa – Shri Nivasa – that is, Nivasa, the place of residence of Shri, Goddess Lakshmi. Thus, the term ‘Lakshmi Narayana’ denotes the single divinity of Narayana with Lakshmi and also, Lakshmi’s Narayana. It is also said that while Narayana is the protector, Lakshmi is the embodiment of compassion, and hence, one can get the grace of Lakshmi Narayana with ease, by taking the route of Lakshmi worship.

Lakshmi Narayana that is Lord Narayana along with his consort Lakshmi usually resides in his heavenly abode, Vaikunta. As the protector of the universe, the Lord takes upon himself the responsibility of safeguarding the lives of people and ensuring their peaceful existence. For achieving this end, the Lord himself incarnates on earth from time to time, to annihilate evil, protect people from cruelties and to establish dharma, the ultimate righteousness. While Goddess Lakshmi, who is inseparable from him, remains part of him in all these Avatars (incarnations), she also incarnates in a human form and joins the Lord in some such Avatars, and together as Lakshmi Narayana, they fight evil, establish righteousness and ensure the well-being of the people.

When the Lord came down as Rama, the prince of Ayodhya, Lakshmi too incarnated as Sita, the princess of Mithila. Thus, Lakshmi Narayana lived on earth as the ideal human couple Rama and Sita, set an example to others through their own lives and conducts, faced trials and tribulations in life and underwent sufferings like any other human beings, for the sake of the welfare of humanity. Together, they fought evil, which was present then in the form of demon Ravana. This Rakshasa (demon) abducted Sita and imprisoned her in his island capital Lanka, and Rama marched there leading an army of monkeys, fought and killed the demon in a bloody war, and thus rid the world and its people of his atrocities. When Narayana took the next Avatar as Krishna, Lakshmi accompanied him too, as Rukmini and stood by him as he annihilated evil and established dharma on earth.

It is said tastefully that even when the Lord took the Vamana Avatar, as a young, celibate Brahmin boy, Goddess Lakshmi was very much present in her usual abode of the Lord’s chest, and only in order to conceal his own identity as Lord Narayana, the Lord appeared covering his chest and thus, the Goddess herself, with a cloth!

Lakshmi Narayana worship is very popular with the people, who pray to the Lord at their homes and in temples. There are many Sampradhays or sects, which regard Lakshmi Narayana as the ultimate divinity, and grand and exquisite temples have been erected for the Lord accordingly, at many places. Lakshmi Narayan Mandir, popularly known as Birla Mandir, in New Delhi is one such well-known temple. It is believed that worshipping Lord Lakshmi Narayana can get for the devotees the complete blessings of the divine couple and shall bestow welfare, success, prosperity and a fulfilled life for the devotees and their families.

Lakshmi Narayana showers the knowledge of art and music. He is the bestower of long life, wealth, happiness, children, property and good education.