The Dandeeswarar Temple is dedicated to Shiva and lies in Velachery, a suburb in Chennai city. The temple is situated on the Velachery main road and lies 2 kilometers east of Guru Nanak College. The presiding deity is Dandeeswarar (bestower of mythical staff), and the Mother is called Karunambikai (merciful Mother).

The temple administration is being handled by the HR & CE Department of the Government of Tamil Nadu. 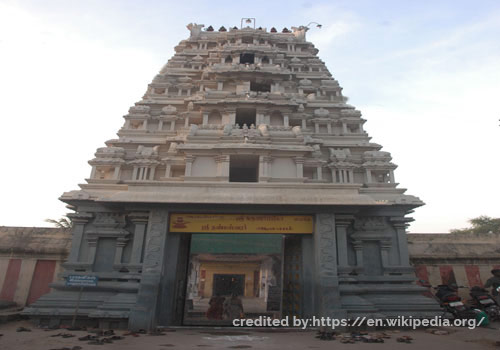 This famous temple came into being due to a fascinating duel between Markandeya and Yama, the God of Death. The duel began at Thirukadavur and ended at Velachery, which was a part of Puliyur Kottam, in ancient Chennai.

The legend surrounding the Velachery Dandeeswarar temple is associated with the story of Markandeya, the son of Sage Mrikandu, and his wife, Marudmati, during the Dwapara Yuga. They had no children for many years. After years of severe penance, Shiva appeared before him and granted the sage a boon. But before granting the boon, he posed a question to the sage, “Would you like a pious, virtuous, and wise son who will live up to sixteen years or a dull, evil-natured son who will live for many years?”

Sage Mrikandu replied that he wanted a virtuous son because he could be proud of him. Accordingly, Shiva granted the boon and vanished. Even as a boy, Markandeya was able to master all the Vedas and Shastras. The sage and his wife felt very proud of their son. When Markandeya turned 16, his parents became gloomy, thinking of the fate that awaited their son. Soon, Yama the God of Death appeared before them, riding his buffalo, holding a noose in his hand to take Markandeya’s life. However, the spunky boy decided not to go with Yama. Saying that he would defy death, he hugged the idol of Shiva.

But Yama threw his rope towards him, and the loop fell around Markandeya’s neck as well as the Shiva Linga. At once, the Shiva Linga split into two, and Shiva emerged from it, with his trident in his hand. He defeated Yama in a battle to the point of death, and later revived him. Another version says that Shiva dealt a blow to Yama on the chest, and saved Markandeya.

Shiva then gave Markandeya a boon, saying that he would remain a young man forever, till the world came to an end. He also took away Yama’s Dhandam (staff) to punish him for harassing his devotee. Mother Earth or Bhoomidevi was worried that as Yama had lost his power, people would not die, and the earth would become overpopulated and lose its balance. Yama, who no longer had any power to take lives, began a journey to Mount Kailas to recover his staff or Dhandam and get permission to resume his duties.

But Sage Narada advised him to go to Vedasireni (now Velachery) and make his request before Shiva’s Swayambhu (self-manifested) Lingam, which was present there. Yama had lost his strength and created a Theertham called Yama Theertham and took a dip in it. After this, he prayed to the Lingam. Once he did so, Shiva returned his Dhandam to him, and Yama’s powers as the God of Death were restored to him. Yama requested that the place be named Dandeeswarar, and thus, the Dandeeswarar temple came into being. This legend finds partial mention in the Thiruvanmiyur Sthalapuranam.

There is another important incident associated with the temple. It is said that the four Vedas came and prayed to God here, after which they regained their strength. This was after they were taken by the Asura Hiranyaksha and immersed in the sea. It was Vishnu who rescued them after taking his Matsya avatar. Thus, this temple is frequented by those who lose their strength and vitality and want to recover it. The name Velachery itself is said to be the corrupted form of Veda Shreni (place of Vedas).

Another legend has it that in the Treta Yuga, the Asura, Somasura, grabbed the Vedas from Brahma . They were immersed in the ocean, but Vishnu took his Matsya avatar and recovered them from the Asura. As the Vedas had been in the custody of the Asura for some time, they had become impure and had acquired Asura Dosha. Hence, they did penance so that Shiva would restore their purity and sacredness. Shiva purified them and restored them to their original glory. The place where the four Vedas worshipped was called Vedasreni, which over the yugas came to be known as Velachery.

Another legend has it that a lot of yagnas were performed in this village. Yagna is Velvi in Tamil. The place was called Velvichery and later came to be known as Velachery.

According to another legend, once, the Sapta Kanyakas, or seven virgins, decided to destroy am Asura, but ended up killing a sage by mistake. The Asura, meanwhile, came to know that the Kanyakas were planning to kill him. The Kanyakas incurred the dosha of killing the sage, and they also feared the Asura. So, Shiva sent Veerabhadra to protect the Kanyakas. Veerabhadra slew the Asura and protected the virgins. It is because of this that Veerabhadra is seen along with the Kanyakas as their guardian deity.

The walls in the sanctum area have a lot of Tamil inscriptions. The Goddess Ambal was installed in the temple by Appayya Dikshithar with the Sri Chakra in the 16th century. A devotee from Arcot is believed to have built the shrine of Ganesha inside the temple and made provisions for Nithya Pooja.

Velachery was said to have existed as a village as far back as 9th century CE. The oldest inscriptions in Velachery are seen in the Selliyamman temple, during the reign of King Parakesarivarman, Parantaka Chola and Parthivendravarman in the 9th century.

It was believed that during the 12th century, Velachery came briefly under the rule of the Kadavas, feudal powers under the Chola kings and Pandya emperors. An inscription of King Kopperunjingan I of Senthamangalam in the South Arcot region was found in Velachery.

The temple has three entrances – in the east, west, and north directions. The sanctum faces east, but the north-facing tower with the five tiers is the main entrance.

The presiding deity is Dandeeswarar, in Shiva Lingam form in an east-facing sanctum. It was said that during the early period, the rays of the sun would fall on the Lingam on the exact date of the Tamil New Year day, but later with high-rise buildings built around the temple, this could not be viewed.

Mother Karunambika is housed in a separate sanctum facing south, located in the Maha Mandapam. She is seen in a standing posture with four arms. A noteworthy fact is that the Sri Chakra installed by the renowned Vedic scholar, Sri Appayya Dikshithar, is in Goddess Karunambika’s shrine.

The Nandi Mandapam, flagstaff, and Bali Peetam are found in this area. Nandi appears in a submissive posture with his head bowed. The Dwarapalas are at the entrance of the Ardha Mandapam. Here the idols of Ganesha and Kartikeya with his consorts Valli and Deivanai can also be seen.

The outer prakaram houses the idols of Surya, the 63 Nayanmars, Nalvar, Sekkizhar, Ganesha, Veerabhadra, and Saneeswara. Other shrines include that of Vishvanathar and Visalakshi, with small idols of Ganesha and Subramanya. Vaitheeswara Lingam with Nandi, big Chokkanatha Lingam, Goddess Meenakshi with Nandi, Navagrahas, and Veda Vinayaka are seen in the outer prakaram.

Tamil and Devanagri etchings can be seen on the pillars. In the gostha wall of the sannidhi is Goddess Durga. There are idols of Goddesses Mahalakshmi and Saraswati in the prakaram (corridor).

Generally, in temples, Virabhadra is seen in a standing posture with a Danda. But in this temple, he is seen seated, with his right leg folded. He holds a Rudraksha mala instead of a Mazhu and a Danda. The Kostha idols reflect the beauty of Chola sculpture. Ganesha and Yoga Dakshinamurthi are found in a unique position, and Nandi is seen on a Peeta.

Since Shiva removed the Doshas incurred by the Vedas, Dakshinamurthy in this temple is worshipped as Yoga Dakshinamurthy. Chandikeswara and Gnanasambandhar are seen in south-facing shrines. A big idol of Nataraja and Sivakami are found in a separate shrine. The idol of Bhairava, a sculpture of Sambu Surya, and an idol of Vishnu, in place of Chandra, are seen in this prakaram.

The temple has a holy water tank called the Yama Theertham. The Vilva tree is the Sthala Vriksham of the temple.

On full moon days, special Abishekam and Aradhana are performed at the temple. Veerabhadra being the guardian deity of women, they worship him for relief from their sufferings. Women devotees offer milk abishekam and betel leaf garlands to him.

People who have lost their jobs pray to Dandeeswarar for longevity and good jobs. Young women pray to the Sapta Kanyakas and Veerabhadra for a happy life.

People celebrate their 60th and 80th birthdays here as this is the place where Yama, God of Death, retrieved his Danda. They offer prayers and perform Homas for longevity.

The temple observes Pradosham, Shashti, Krithikai, and Navaratri with reverence. The temple celebrates Maha Shivratri in February-March, Chitra Pournami in April-May, Sundays in the Tamil month of Aadi in July-August, and Anna Abishekam in October-November.

How to Reach Dandeeswarar Temple

The nearest airport is the Chennai International Airport, which lies 12 kilometers away from the temple.

The Velachery Railway Station lies 2 kilometers away from the temple.

The Gandhi Road Bus Stop lies 250 meters away from the temple.