Introduction about the Arunachalam (Thiruvannamalai) Temple

The Annamalaiyar temple in Thiruvannamalai is a sacred Hindu shrine located at the base of the Annamalai Hills in the South India state of Tamil Nadu in India. It is dedicated to Lord Shiva and associated with the Pancha Bhoota Stalas (five elements). Shiva is represented in the phallic form of a Lingam in this shrine and popularly known as Annamalaiyar or Arunachaleswarar. The element of fire is specifically revered here and Shiva’s symbol is referred to as Agni Lingam. He is accompanied by his consort Goddess Parvati who is revered as Unnamulai Amman. The deity finds mention in the ancient Hindu sacred text the ‘Tevaram’ which was written by the fabled Tamil ‘Nayanars’ (saint poets). Many works of literary art were also composed here by eminent saints of yore. The administration and maintenance of the temple is carried out by the Hindu Religious and Charitable Endowments Department of the Government of Tamil Nadu. This highly popular shrine is a famous pilgrimage and tourist center, attracting numerous visitors from far and near.

History of the Arunachalam (Thiruvannamalai) Temple 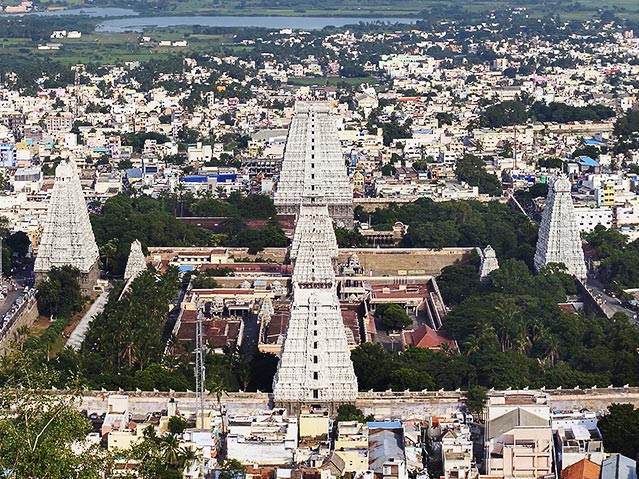 The structure as it stands today dates back to the 9th century according to the inscriptions found in the premises, and was built by the Chola kings. Expansions and renovations were later carried out by the Vijayanagara rulers, and then subsequently by the Saluva Dynasty and the Tuluva Dynasty.

Some inscriptions also indicate Thiruvannamalai was ruled by the Pallavas before the 9th century. The ancient Tamil saints Appar and Sambandar are also believed to have worshipped Annamalaiyar in the temple. The Chola kings were dominant in the region for over four centuries and patronized the temple frequently. The temple and the town of Thiruvannamalai were overrun by the Nawab of the Carnatic for a brief period of time during the mid-17th century. The region was under various Hindu and Muslim rulers after that, till the colonial powers took over control.

It is believed that Parvati once playfully closed the eyes of her husband Shiva, in Mount Kailash. Though it was only a moment in celestial terms, this resulted in the light of the entire Universe being snuffed out and everything was in darkness for years. Dutifully, Parvati along with other devotees performed severe penance to appease Shiva. True to form, Shiva appeared as a bright column of fire at the top of the Annamalai hils, thus illuminating the Universe once again. The divine couple then merged as one entity to take the form of Ardhanarishvara (half-male, half –female).

Significance of the Arunachalam (Thiruvannamalai) Temple

The Annamalaiyar temple is widely perceived to be one of the Pancha Bhoota Stalams (five element temples) of Lord Shiva. Each of these, represents a manifestation of the five natural elements, which is relevant even today. These are land, water, air, sky and fire and Shiva is said to have manifested here as fire or Agni. The Lingam enshrined in the temple represents several attributes of human nature which when adhered to, are said to lead to self-liberation The temple is also referred to as Manipooraga Stalam which advocates breaking free from the chakra of all human vices.

Architecture of the Arunachalam (Thiruvannamalai) Temple

This ancient temple is situated on a sprawling expanse of land measuring over 25 acres. Each side has a Gopuram (gateway tower) and the eastern tower is called the Rajagopuram, which is the tallest. The other towers in the temple are Vallala Maharaja Gopuram and Kili Gopuram (Parrot Tower). The complex has 5 precincts, which is presided over by Nandi, Lord Shiva’s sacred Bull.

The main shrine facing east is the oldest in the complex and houses the images of Nandi and Surya the Sun God . There is also an image of Lord Vishnu in the form of Venugopalaswamy behind the Sanctum. There are also several images of various Hindu Deities in the premises. Lord Shiva’s consort is depicted in a standing posture in the second precinct of the temple. There is also a shrine for Sambandar Vinayagar in the north of the temple and a small shrine for Subramanya. The temple also houses a sacrifice platform within its precincts. The 1000 pillared hall is a remarkable feature of the shrine and a large Sivaganga tank outside adds to the beauty of the temple. The sacred temple tree is known as Magizha and childless couples pray here to beget progeny.

The temple also houses a sixteen pillared hall known as the hall of light. A marriage hall also is located within the premises and is built in the Vijayanagara style. There is also a Vasantha Mandapam (hall of spring) in this huge complex which covers an area of over 10 hectares and is one of the largest in India.

The Shaivite priests perform regular Pujas every day and the temple rituals are performed six times a day. Religious music reverberates through the temple complex and verses from the Vedas are read by the priests during worship. The temple also observes weekly, fortnightly and monthly rituals. Several festivals are celebrated in the temple every year, including the Brahmotsavam during the Tamil Month of Karthikai in November-December.

Tiruvoodal and Maatu Pongal are another major festivals celebrated in the temple in the Tamil month of Thai.

On the occasion of Chitra Pournami , five temple cars are taken out in a procession, which is witnessed by hordes of people. During Karthigai Deepam, a huge lamp is lit and placed on top of the Annamalai hills, which can be viewed from a distance. The temple is thronged by thousands of devotees who come to participate in the festivals and worship Lord Annamalaiyar.

Benefits or Blessings of the primary deity- Arunachalam (Thiruvannamalai) Temple

Circumambulating the Arunachala hills barefoot during full moon days is referred to as Girivalam. It is said that undergoing this ritual removes sins and fulfills desires. It also helps one achieve Moksha or liberation from the cycle of birth and rebirth.

Location – How to reach the Arunachalam (Thiruvannamalai) Temple

The famous Arunchalam temple in Thiruvanamalai is accessible by various modes of transport.

By Air: The nearest Airport is in Pondicherry, about 89 km away.

By Train: The Railway Station is about 1 km away from the temple.

By Bus: Thiruvannamalai is well connected by bus service to neighboring towns and cities.