One of the most visited temples is the Arulmigu Kandaswamy Temple, which lies forty kilometers away from Chennai on the way to Mahabalipuram. The temple is located in Thiruporur and faces east. The temple is under the care of the Hindu Religious and Endowment Board of the Government of Tamil Nadu.

Thiruchendur is where Murugan fought the demons along the seafront, while he decimated the asuras on the land front called Thiruparankundram. According to the Puranas, Murugan fought the evil here, and the place is hailed as Thiruporur. 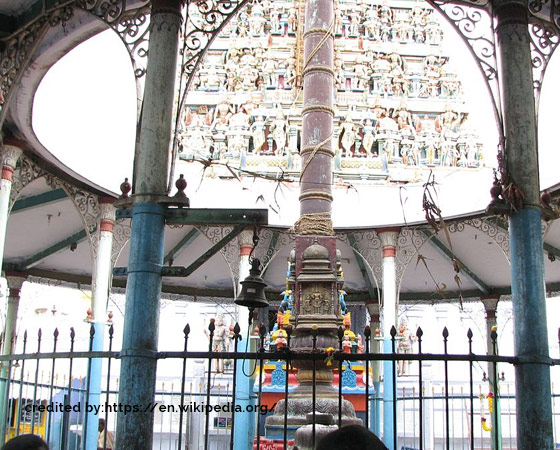 Thiruporur is an ancient, little village that lies around the imposing Arulmigu Kandaswamy temple.

According to history, Murugan fought the battle against the evil Tharaka Asuran, in ether or air. The battle signifies the vanquishing of arrogance. Thiruporur suggests the venue of Por (war).

Over four hundred and fifty years ago, lived the founder of this ancient hamlet, Adhinam Srimad Chidambara Swamy. He was an ardent devotee of Madurai Meenakshi Amman. The devotee had refused intake of any nourishment until the Goddess gave him her vision. He was lying for several days and almost went into a coma. One night, he had a dream in which the Goddess instructed him to build a temple for Murugan at Thiruporur. Suddenly, he heard the twinkling sound of Goddess Meenakshi’s anklets, and upon attempting to open his eyes, he had a glimpse of her divine feet.

Goddess Meenakshi raised him to his feet, and his skin turned golden at her touch. She told him that the previous attempts to build the temple had failed. Chidambara Swamy went into the dense forests covered by palm trees and tried to find out the site where previous attempts had been made to build the temple. However, he failed to locate them. Then, Murugan himself came in the form of a small boy and guided him towards the place that would be the sanctum sanctorum.

Later, Chidambara Swamy managed to unearth the Swayambhu idols of Murugan and his consorts. He then established the temple. In those days, the hamlet came under the control of a minor Muslim ruler. His daughter was afflicted with a form of vertigo, and all attempts to cure her failed. His minister advised that he seek the blessings of Chidambara Swamy. The ruler agreed and took his daughter to visit the holy man. They prostrated before Chidambara Swamy, who applied sacred ash to the daughter’s body. She was immediately cured of her disease. There is a shrine dedicated to Chidambara Swamy in the temple.

History of the Arulmigu Kandaswamy Temple

The temple is believed to have been built in the 10th century CE during the Pallava era. Chidambara Swamy was a descendant of the Tamil Sangam age poets, and he is said to have rebuilt the temple in the 17th century.

The temple is ancient and reflects the Dravidian style of architecture. It sits on four acres of land. It underwent further expansion in the eighteenth century after the idols were excavated in Thiruporur. The temple has a beautiful five-tiered gateway tower (Rajagopuram) that rises to a height of 70 feet. There is a hall with 24 pillars that leads to the sanctum. The sanctum is made of granite and houses the presiding deity of Murugan, as Sree Kandaswamy.

The temple faces east, and the deity is 7 feet tall, in a standing posture. The deity is portrayed with two hands, and one of them holds the Vel (spear). There is an image of a peacock beside the presiding deity. The temple houses separate shrines for Murugan’s consorts, Valli and Deivanai. Murugan’s parents, Shiva and Parvati have a separate shrine. The temple tank lies outside the temple.

Sree Kandaswamy was revered by Chidambara Swamy in 726 verses. It is believed he discovered the idol of Murugan under a palm leaf. Even today, the temple maintains a palm leaf believed to be the original one. The temple has been glorified by one of the most prominent Tamil saint-poets, Arunagirinathar, in his work, Thirupugazh.

The image of Sree Kandaswamy was self-manifested, and so no ablutions are done to the presiding deity. All rituals are performed on a yantra. The temple priests perform the poojas daily, with weekly, monthly, and fortnightly rituals performed in the temple.

The temple celebrates major festivals, including Vaikasi Visakam in the Tamil month of Vaikasi. The Paal Kudam and Paal Kaavadi festivals are celebrated during Pongal (harvest) festival. The temple also celebrates the Kanda Shashti festival and Navaratri during the Aippasi month. (October- November).

How to Reach Arulmigu Kandaswamy Temple

The nearest airport is the Chennai airport which is 40 kilometers away.

The nearest railway station is the Chennai Railway Station, which is 50 kilometers away. There are two railway terminals in Chennai, and they are well connected, with trains bound north, south, east, and west.

There are regular bus services from many cities of Tamil Nadu to Thiruporur. There are several MTC buses that ply between Chennai and Thiruporur.