Meenakshi Temple is a historic shrine located on the southern bank of Vaigai River in the temple town of Tamil Nadu – Madurai. The holy site is dedicated to Goddess Parvati in the name of Meenakshi and her consort Lord Shiva as Sundareswarar. The temple is extremely popular and is an iconic symbol for the Tamil people to take pride of. There is a mention of this temple in Tamil literature and it forms the heart of the 2500 year old city – Madurai. 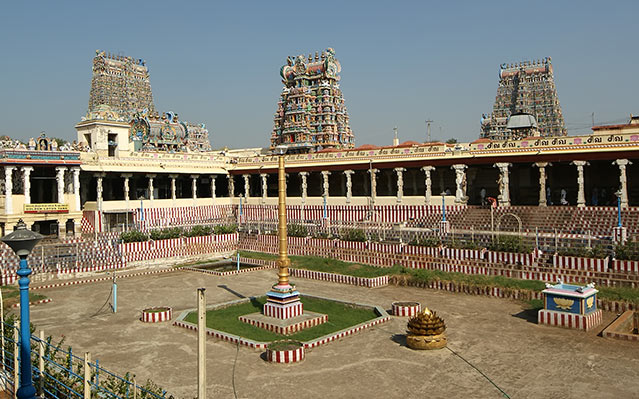 There are several legends associated with Madurai Meenakshi Temple. Highlighting a few of them below:

One legend says it that the Meenakshi temple was founded by Indra, Lord of the Devas (Angels), when he was on his pilgrimage to expiate for his misdeeds. He felt light-hearted and felt his burden lifting off from him when he neared a swayambu (self-manifested form) lingam at Madurai. Attributing this miracle to the presence of the Lingam, he built a temple for Lord Shiva. Answering his ardent prayers, Shiva blessed him and caused golden lotuses to appear in a nearby pool.

Another legend states that Goddess Parvati appeared out of the holy fire during Putra Kameshti Yagam (sacrifice for childhood), performed by the 2nd Pandya King Malayadwaja Pandian and his queen Kanchanamalai. Yet another legend says that the Goddess had already given notice to Kanchanamalai in one of her previous births that she would have the divine blessing of mothering the Goddess.

The girl who came out of the fire had three breasts. A divine voice pacified the king and the queen not to worry about the abnormality and added that the third breast would disappear after she meets her future husband. The King named the child Tadaatagai and made her the heir to his throne. She was taught all the 64 Sastras (field of science).

During her coronation, she had to win over all the three worlds encompassing all the eight directions. Tadaatagai could easily defeat Satyaloka (Brahma’s Abode), Vaikunta (Vishnu’s Abode), Amaravati (Deva’s Abode) and also the Bhoodhaganas (Guardians) and Nandi (Sacred Bull) of Kailasha, Lord Shiva’s abode. But once she sighted Lord Shiva, she bowed her head out of shyness and her third breast disappeared. She then realized that Shiva was her ordained husband and she is none other than an incarnation of his consort Goddess Parvati.

Both Lord Shiva and Tadaatagai returned to Madurai where their wedding was held, with Lord Vishnu presiding over the divine ceremony. This glorious event is celebrated every year in Madurai as “Chithirai Thiruvizha”, which was started by Thirumalai Nayakar during his ruling period.

Meenakshi Temple is one of the most significant and famous temple jewelling the city of Madurai and known for its antiquity and historical importance. History has proof that the temple was visited by the ancient Greek historian Megasthanes and several others from Greece and Rome for trade purposes during the rule of Pandyas (3rd century). Later in the 13th century, Pandyas won back Madurai from Chola rulers and it was during this period, many literary works have been written based on the magnificent city. One such famous Tamil epic is ‘Silappathikaram’. This Holy Shrine houses Meenakshi as the presiding deity unlike all other Shiva temples in Tamil Nadu, where he is the primary deity.

The temple has the largest complex among all the temples in Tamil Nadu and is known for its innate beauty and intricate architecture. This added to turning it into a famous tourist destination for those who visit South India. The temple attracts 15,000 visitors a day, around 25,000 on Fridays, and receives annual revenue of 60 million. There are an estimated 33,000 sculptures in the temple. Owing to all these facts, the temple has the privilege of bagging a place in the list of top 30 nominees for the "New Seven Wonders of the World".

The enormous complex of Madurai Meenakshi Temple is divided into a number of concentric quadrangular enclosures contained by walls of heavy stonework. It is one of the few temples in Tamil Nadu to have entrances facing all the four directions. Vishwanatha Nayaka redesigned the entire city of Madurai according to Shilpa Shastra (meaning Rules of Architecture). Ancient Tamil classics describe the temple and the city as a lotus with the temple as the center and the streets of the city radiating out like its petals. The outer precincts of the temple contain a huge festival calendar during which decorative processions circumambulate the Holy Shrines.

The temple is surrounded by 14 Gopurams or gateway towers, of which the southern tower is the tallest and the most famous rising to a height of 170 ft and was built in the year of 1559. The multi-storeyed Gopurams are adorned with stone sculptures of Gods, Demons and Animals in bright colors.

The central shrine is dedicated to Goddess Meenakshi and Sundareswarar. The idol of the goddess is believed to be sculpted out from a single emerald stone. This is again surrounded by 4 smaller Gopurams leading to the central shrine. Both the shrines of Meenakshi and Sundareswarar are covered with Gold plated Vimanas (tower over the sanctum). A tall 7 feet sculpture of Lord Ganesha is located outside the shrine of Sundareswarar and is called the Mukuruny Vinayakar.

There are numerous halls within the temple complex each with its own significance. They are listed below:

The Sacred Temple Tank – Also known as the Porthamarai Kulam (Pond with the golden lotus) has a legendary mention in ancient Tamil classics. It is in fact a meeting place for authors and poets. They present their work here and it is believed that only good ones survive and the poorly written works sink in the pond. One such succeeded work is the scholastic work Thirukkural, written by Thiruvalluvar.

Meenakshi Thirukalyanam is the most important festival associated with the temple and is celebrated in the month of Chaitra (April – May) every year. During this one month period several occasions such as Ther Thiruvizha (chariot festival) and Theppa Thiruvizha (float festival) adds grace to the ceremony. Other prominent Hindu festivals celebrated at the temple include Navratri and Shivratri. Similar to other Shakti shrines of Tamil Nadu, this temple also has a special observance of Fridays in the months of Aadi (Jul – Aug) and Thai (Jan – Feb). Avani Moola Utsavam is celebrated for 10 days during the months of Aug-Sep describing various Thiruvilayadals (sacred games) of Lord Shiva.

Madurai Meenakshi Temple is one of the most sacred and famous pilgrimage sites and is a must visit holy shrine. The temple houses Lord Shiva and Goddess Shiva as the presiding deities, who shower their devotees with infinite success and prosperity. Thousands of devotees visit the temple especially during the festival period to seek the divine blessings of the Gods.

It is believed that one who takes a holy bath in the waters of this pond of Golden Lotus (Porthamarai Kulam) on Amavasya (New Moon) day, the first day of the Tamil month, days of eclipse and other auspicious days and worship the Lord, they will be blessed with all their desires for success. To seek the blessings of the deities for quick recovery of patients at the emergency wards of the Government hospital, Madurai, joint prayers are held at 5.30 p.m. on every Friday.

How to reach Meenakshi Temple

By Air: Madurai Airport is the nearest located 12 km from the city. Being one of the important airports in Tamil Nadu, it offers domestic flight services to major cities in India and International services to Colombo, Sri Lanka and Dubai,UAE . The carriers operating from the airport are Air India, Jet Airways, Mihin Lanka, and SpiceJet.