Vaishnodevi temple is one of the most sacred pilgrimage sites of India with Mata Vaishnodevi as the presiding deity. The temple is located inside a cave in Jammu & Kashmir. The holy shrine is situated at a height of 5300 feet above sea level on the hills of Trikuta mountain range and is 48 km away from the city of Jammu. 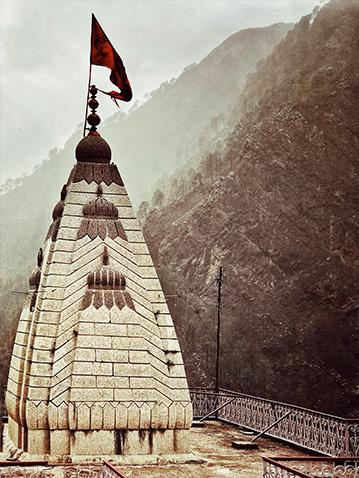 The idol of the primary deity is in the shape of natural rock formation called Pindies. There are three Pindies in the sanctum representing Goddesses Saraswati, Lakshmi and Durga. The three structures also symbolize the three divine characteristics - creation, preservation and destruction of the Mother. An estimated number of eight million pilgrims visit the holy site every year, making it the second most visited pilgrimage sites after Thirumala Tirupati.

According to geological studies, the age of the holy cave is believed to be a million years. Rig Veda has a mentioning of the Mount Trikuta, however there is no reference for the worship of the Mother Goddess. The first mention of Mother Shakti is in the great Hindu epic Mahabharat, when Arjun, the warrior of Pandavas was advised by Lord Krishna to seek the blessings of Goddess Shakti. Arjun addresses the Mother Goddess as ‘Jambookatak Chityaishu Nityam Sannihitalaye’, which means ‘you who always dwell in the temple on the slope of the mountain in Jamboo’ (probably referring to the present day Jammu).

It is also believed that Pandavas were the first to build the Kol Kandoli and Bhawan in gratitude to Mother Shakti. On a mountain adjacent to Mount Trikuta, five stone structures overlook the holy cave symbolizing the five Pandavas.

Some traditions believe that this is the holiest of all the Shaktipeeths (abode of the divine Goddess), since her skull fell here. Others believe that her right arm fell in this region. Complying with this, remains of a stone hand called Varad Hast is seen inside the holy cave.

Mata Vaishnodevi Temple has a unique structure when compared to other Hindu temples in the country. The Temple is located at a height of 5200 feet above sea level and yet millions of devotees visit this holy shrine to seek her divine blessings. The Goddess presides the holy cave in the form of three Pindies (stone structures) symbolizing the three powerful female deities – Kali, Lakshmi and Saraswati. On the way to the Darshan (Sighting) of Holy Pindies, symbols, statues and idols of almost 33 crore Gods and Goddesses are seen inside the cave.

Two tunnels of 200m length, one for entry and the other for exit, are built to accommodate the maximum number of pilgrims in the sanctum sanctorum. Inside the Holy Cave, symbols of Vakratund Ganesh, Surya, Chandra, Hanuman known as Launkra Beer, 14 feet long body of Bhairon Nath who was killed by the Goddess. Charan Ganga River, after which devotees have to go wading through water to have a darshan of the Goddess, Sesh Nagh, five Pandavas, Saptarishis, Brahma, Vishnu, Shiva, holy cow Goddess Kamadhenu, Goddess Parvati, Goddess Annapurni etc. can be seen.

Navratri, the famous nine-day Hindu festival is considered the most auspicious for Vaishno Devi. Since the Holy Shrine houses all the three Goddesses, the first three days are dedicated to Goddess Kali, middle three days to Lakshmi Devi and the final three days are spent worshipping Goddess Saraswati. The Temple is beautifully decorated with flowers and the festival is fervidly celebrated by everyone. An annual event is also conducted by the Jammu & Kashmir State Tourism Department during these nine days.

The Holy Shrine is regarded as the most sacred of all the Shaktipeeths (Mother Shakti’s abode) and reveals the three divine forms of Shakti Devi. Worshipping her whole-heartedly blesses one with bravery, knowledge and wealth.

The three divine forms are as follows:

How to reach Vaishnodevi Temple

Vaishno Devi Temple is situated at a distance of 14 km from the town of Katra and 52 km North of Jammu. Katra is situated at a height of 2,800 feet and takes about 2 hours by bus from Jammu.

By Air:The nearest airport is Jammu, which is 48 km from Katra. Both Indian Airlines and Jet Airways operate daily flights to Jammu. The average flying time from New Delhi is about 80 minutes.

A helicopter service is also available in the morning from the airport at Sanjhi Chat in Jammu. The ride costs about Rs 2,000 one way.

By Road:Regular buses leave for the 52 km trip from the central bus stand in Jammu to where the road ends at Katra.

By Walk:From Katra, one can reach the Holy Temple with a steep 13 km walk. Horses can be rented to reach the cave. It takes a total of 7 hours to complete the worship and reach Katra.