Vaishno Devi is a mother Goddess, regarded as a manifestation of Durga. Also known as Trikuta, Mata Rani and Vaishnavi, she is also considered as a combined aspect of the principal Goddesses, Maha Kali, Maha Saraswathi and Maha Lakshmi. 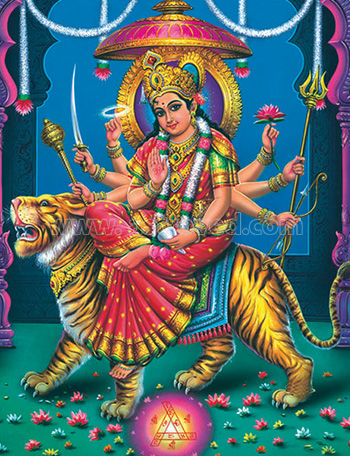 There is an interesting legend about Vaishno Devi. It is said that the Goddess was born in the southern part of the country, to one Ratnakar Sagar, after many years of prayers and austerities by her parents. The divine child was named Trikuta and later came to be referred as Vaishnavi, as she was born in the lineage of Vaishnavas, the Vishnu devotees.

Trikuta was a child prodigy, who had all the markings of divinity in her. At the tender age of 9, she performed a penance on the seashore, when she was fortunate to have the darshan of Lord Rama the Vishnu Avatar, who had come there in search of his wife Sita. While Rama readily gave his blessings to this beautiful-looking radiant girl, Trikuta herself bowed to the Lord and appealed to him to accept her as his consort. As his spouse was very dear to him and also, as he had promised not to accept anyone else as his wife, Rama declined but promised Trikuta that he will definitely marry her, when he takes the incarnation of Kalki, later. Giving her a bow, an arrow, a lion and a small army of monkeys for her protection, Rama advised her to continue her penance in a specific cave in the Manik mountains in the north and blessed her that the entire world will revere and worship her as Vaishno Devi. The grateful Trikuta observed the Navratri Vrat praying for Rama’s victory in the war with Ravana.

Undergoing many trials, Vaishno Devi reached the place, set up her Ashram and continued her meditative penance there. Soon her fame spread far and wide, and people began flocking to her seeking her blessings. Gorakh Nath, a Tantrik wanted to test her spiritual attainments and sent his able disciple Bhairon Nath to know the truth. Instead, as he saw Vaishno Devi, Bhairon Nath got overwhelmed by her extraordinary beauty and began pleading with her to marry him. And she had to move away to a different place to continue her spiritual quest. But Bhairon came pestering her there too, and left with no option, she had to put an end to him. In his bodiless form, when Bhairon sought pardon and pleaded for mercy, the Goddess forgave him and also declared that devotees coming for her worship shall visit his Ashram too, for their pilgrimage to be complete.

Subsequently, she is said to have cast off her mortal coil, took on the form of a rock and is believed to be deeply immersed in her meditation in a cave, ever since. True to Rama’s blessings, Goddess Vaishno Devi remains immortal, and is worshipped by thousands of devotees from many parts of the world.

The very famous shrine of Goddess Vaishno Devi is in the state of Jammu and Kashmir. It is located in a holy cave, at an altitude of 5200 feet, in the three-peaked mountain called Trikoot and can be reached by trekking about 12 kilometres from the base at Katra. In the sanctum, the deity appears in the form of three rocks known as Pindies. Vaishno Devi is believed to fulfill all the wishes of her children and hence, millions of faithful devotees undertake the tough pilgrimage throughout the year and offer worship to her, almost round the clock.