Kamadhenu is a sacred cow, who is considered as divine and is worshipped as a Goddess . Vedas hold her in high esteem, describe her as the mother of all cows and also regard her as having miraculous powers, through which she can bestow anyone with anything that he or she wants. Scriptures also hail her as the mother of all bovines and also of the eleven Rudras. She is depicted as a beautiful cow with the head and breasts of a human-female, and pure white in colour. She is also shown often as having all the Gods or deities within her own body. Kamadhenu is also known as Surabhi and her divine calf is known as Nandhini.

The word ‘Kama’ denotes desires and wishes, while ‘dhenu’ is a giver or provider. Thus, ‘Kama-dhenu’ is a unique cow who can fulfill all the rightful desires of people and bless them with all that they want. 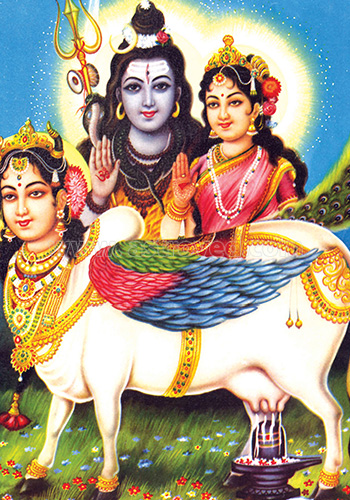 Kamadhenu remains an integral part of Indian culture and there are numerous legends associated with her. According to many of them, Kamadhenu emerged out of the milky ocean when it was churned by the Devas and the Asuras, and began living in the heavens. It was later given away to the seven holy sages and then came in the possession of sage Jamadagni and then sage Vasishta, in due course. She kept giving them plenty of milk and other fundamental necessities, which ensured the well-being of the sages and helped them in conducting rituals and sacrifices.

When Kamadhenu was with sage Jamadagni, the mighty king Karthaveerya Arjuna happened to come there with his people and sage Jamadhagni took good care of all of them, with the help of the wish-fulfilling divine cow. The arrogant king, wanting to possess this Godly creature, dragged it away and her calf forcefully, when he left. The sage’s son Parshurama later marched with his axe to the capital of the king, fought with all his army who attacked him, finally killed the mighty Karthaveerya Arjuna himself and brought back the sacred cow Kamadhenu and her calf.

Epic Ramayana also narrates a similar story, when the cow remained in the possession of sage Vasishta. Once, Vasishta threw a grand feast to king Vishwamitra and his army in his hermitage. The king, on coming to know that everything was produced by the divine cow Sabala, by which name Kamadhenu was called then, wanted to possess her. When the sage refused to part with her, the king tried to carry her away by force. On getting a hint from the sage, the cow herself produced an entire army of brilliant soldiers, who vanquished the might of Vishwamitra and his army. This humiliation forced Vishwamitra to renounce his kingdom and become an ascetic, himself.

Kamadhenu is regarded as the holiest of holy being, whose body, all the sacred Gods themselves have taken as their abode. Hence, each part of her body represents a God and worshipping her amounts to worshipping all the divinities. Even though Kamadhenu is not generally worshipped as an independent Goddess, her idols have been installed and are prayed to at many temples. But, each and every cow is regarded as an embodiment of this divine being and is venerated at many places, right through the year and especially on special and sacred occasions. Thus, the worship of the cow itself is regarded as the worship of Goddess Kamadhenu.

Praying to Kamadhenu is believed to please all the Gods and get for the devotees abundant divine blessings and ensure their overall welfare.