Who is Goddess Annapoorna and what is her significance?

Annapoorna is the divinity of food and nourishment. Anna is food and poorna means completely filled. Annapoorna is thus ‘the giver of food’. She is the divine mother and all the living things are her children, whom she feeds, so that they are sustained and nourished. She not only provides nourishment to the physical body, but also to the soul in the form of enlightenment and gives the energy to attain knowledge and wisdom.

She is a form or incarnation of Goddess Parvati.

What is the legend behind Annapoorna incarnation? 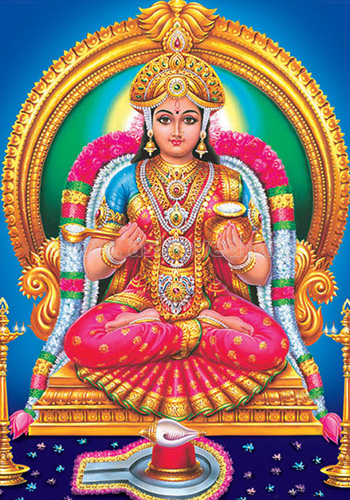 “The world is an illusion, and so is everything associated with it, including food”, so said Lord Shiva to his consort one day. But Parvati was not amused, as she was the divine mother, for whom the world, its beings and all things in it including food, were the manifestations of her own self. The offended Goddess simply disappeared. It was a catastrophe, as time came to a standstill and the world began withering away. Barren earth made food scarce and the beings in it began suffering acutely from the severe pangs of extreme hunger. But the universal mother that she indeed was, she could not stand the sight of her dear children undergoing hardships. With great compassion, she rushed to their rescue, established a kitchen at the holy place of Kashi and began feeding everyone with boundless food, to their heart’s and also stomach’s content.Having fully understood the importance of the world and the material things associated with it, Shiva too extended his empty bowl to the Goddess, who smilingly acknowledged the Lord’s realization and filled his bowl with food with her own hands. The earth and all its beings began flourishing again, and began hailing the Goddess as ‘Annapoorna’, the great provider of food.

As per another legend, Parvati’s colour and appearance faded once, and as per the advice of Shiva, she started doing Anna Daan, that is, distributing food at the sacred Kashi and regained her beauty and looks.

Also called in many other names such as Visalakshi, Bhuvaneshwari and Annada, Annapoorna is said to have appeared on the Akshaya Tritiya day. Akshaya means ‘never diminishing’ and Purna is ‘ever full’, and there can be no doubt about Akshaya Tritiya being the birthday of Annapoorna!

How is Annapoorna depicted?

Annapoorna is portrayed as a beautiful young woman of fair complexion, with a bright round face, three eyes and four hands. Well decorated with ornaments, she has in her left lower hand, a decorated pot containing delicious porridge or food, while holding a golden ladle in the right. Her other hands are showing Abhaya, the protecting and Varada, the boon giving mudras. In some places, she is seated royally on a golden throne with the crescent moon adorning her head and Lord Shiva is standing next to her with a begging bowl.

What benefits accrue on worshipping Annapoorna?

The most famous of the temples for the Goddess is in Kashi, the place of her origin, where she is enshrined next to the Vishwanath temple. In fact, she is considered the undisputed queen of Kashi. Apart from temples, she is worshipped at homes also, especially on the fourth day of the nine day Navarathri festival, while special poojas are held for her during the waxing moon phase of the Chaitra month (March – April).

The blessings of Annapoorna fulfill, not only the material needs but also the spiritual requirements of the devotees. There will never ever be any shortage of food or other essentials in their homes. Her grace can also bestow health, wealth and prosperity, while married women can hope for the long life of their husbands and a happy married life. She is represented as beyond Maya (illusion) and is the supreme goddess of the whole universe. She eradicates fear and bestows protection and welfare.