The word ‘Badrinath’ comes from the word ‘Badri’ (a place where berries grow). Dedicated to Lord Vishnu, who is worshipped as Badri Narayan, this shrine is one among 108 Divya Desams – holy shrines for Vaishnavites. The temple is situated in Garhwal hill tracks of Chamoli District (Uttarakhand, India) along the banks of Alaknanda River. Located at 3,133 m (10,279 ft) above sea level, this shrine is one of the most visited pilgrimage centers of the country. The temple is open for worship for only 6 months a year (End of April till beginning of November), due to extreme weather conditions prevailing in the Himalayas. Best time to visit the shrine is May to June and September to October.

History and Legend of Badrinath Temple 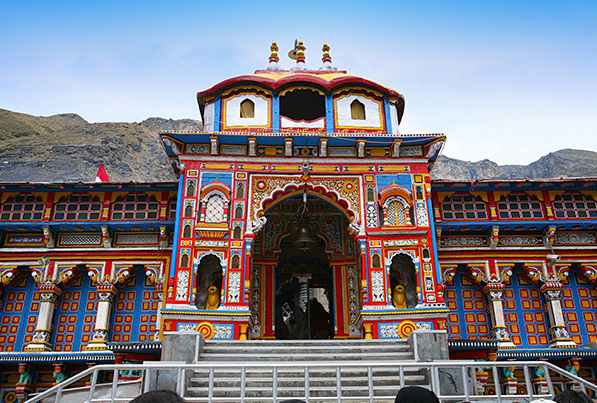 History says that Badrinath Temple was originally established by Adi Sankaracharya in the ninth century. Adi Sankara is an extraordinary scholar and Indian theologist, who took Sanyas (brahmacharyam) at a young age of 14. After that the temple has undergone many renovations. The King of Garhwal moved the idol to the present temple in the sixteenth century. After the Himalayan earthquake in 1803, the temple experienced significant damage and was rebuilt by the King of Jaipur. Badrinath temple is one of the five holy places (Punyakshetras) of India, where the Hindus offer oblation to their ancestors.

There are several legends associated with the Badrinath temple, which is also mentioned in Vedic texts.

One legend says that Lord Vishnu went into deep meditation in Padmasana in this region. Due to this, he was unaware of the extreme climatic condition and his consort Lakshmi spread above him as a Badri tree to protect him from the harsh weather. Lord Vishnu was pleased with her and named the place as Badrikashram afterGoddess Lakshmi. Complying with this legend, one can find the deity in Padmasana posture in Badrinath temple.

Another legend says that when Lord Shiva and Parvati were in meditation in Badrinath, Lord Vishnu disguised as a small boy and cried to them asking for the shrine for meditation. Knowing he was Lord Vishnu, Lord Shiva and his consort moved to Kedarnath.

Yet another myth about Badrinath is that the Pandavas expired one by one climbing the slopes of a peak called Swargarohini, which literally means “Ascent to Heaven”. There is also a town called Mana, which is 4km North of Badrinath, where it is believed that Sage Vyasa wrote the Mahabharata.

Vamana Purana says that the two sons of Dharam – Nar and Narayan, which are the names of the two mountain ranges at present, went into great penance for the wellbeing of all entities in the Universe. Skanda Purana mentions Badrinath as the most sacred shrine of all shrines on Earth, Heaven and Hell. Padma Purana states Badrinath as the holy shrine with plentiful treasures.

Badrinath temple is an ancient holy shrine, which dates back to the Vedic period. The temple is one of the 108 Divya Desams (pilgrimage or holy place) for Vaishnavites, where they perform rituals for their ancestors.

The fact that this sacred destination is devoted to Lord Vishnu and the belief of Lord Vishnu meditating here for thousands of years, turn the place into one of the holiest temples of the country.

Badrinath is also one among the Panch Badris – other four includes Yogadhyan Badri, Bhavishya Badri, Bridha Badri or Old Badri and Adi Badri. The destination also finds its place in the famous 4 pilgrimage sites (Char Dham), which includes Rameswaram, Puri and Dwarka.

Badrinath temple follows traditional North Indian style of architecture. The temple is constructed of stone with walls and pillars bearing numerous carvings. A tall arched gateway at the entrance leads to Sabha Mandap (hall where devotees assemble), which leads to Darshan Mandap (place from where Pooja to the idol is performed) and finally to Garbhagriha (sanctum sanctorium).

The roof of the Garbha Griha extends to a conical spire at a height of 15 metres with a gold gilded dome at the top. A striking 1 metre high black stone idol of Badrinarayan, presides the sanctum sanctorium with a conch and Chakra in each arm. The other two arms rest in the lap of Vishnu who is meditating in the Padmasana posture. With Lakshmi, his consort by his side, Sage Narada is also present. With Kubera on one side and Nar Naryan and Uddhava on the other side, the temple takes its complete form. Garuda and Navdurga are also present.

Mata Murti Ka Mela is the most important festival held at Badrinath Temple, commemorating the descent of the River Ganges on Earth. It is believed that the mother of Badrinath divided the river into 12 channels for the welfare of the Earth and the place where Ganges flowed became the Holy Badrinath Temple.

Badri Kedar festival is celebrated in the month of June in both Badrinath and Kedarnath temples. The festival lasts for eight days with artists from around the world performing during the function. Vedic scriptures such as Ashtotram and Vishnu Sahasranama are recited during the rituals.

It is believed that people with Dhanu, Simha and Mesh Rashi should visit this holy destination once in life time.

The temple is one of the holy pilgrimage sites that Hindus visit to offer oblations to their ancestors. Taking a holy bath at the Alaknanda River and worshipping Badrinath is believed to purify one’s soul.

How to reach Badrinath Temple?

By Train: The nearest railway station to Badrinath is Rishikesh at a distance of 295 kms. Trains to Rishikesh are frequent and taxis and buses are available from Rishikesh to Badrinath.

By Road: Buses and taxis are easily available to Badrinath from major destinations of Uttarakhand state such as Dehradun, Haridwar, Rishikesh, Srinagar, Chamoli etc.