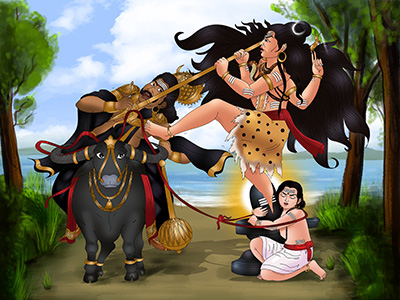 Sage Markandeya is one of the greatest saints of India. He belongs to the clan of Saint Brihu. He did severe penance, and his extreme devotion towards Lord Shiva has raised him to the level of immortal. He is believed to be a great saint of both Saiva sect and the Vaishnava sect. He rendered absolute devotion and insisted people show true love towards almighty. He is one of the “Chirangeevis”, the immortals, and has risen to the level of setting as a benchmark to devotion.

Sage Markandeya was born to Sage Mrukandu. The couple was childless and performed severe austerities to Lord Shiva. On seeing their devotion, Lord Shiva granted them a wish where they can choose between an intelligent son who will live for just 16 years or a son who is stupid but would have good longevity. The couple chose an intelligent son. Lord Shiva, immediately granted them a son, whose eyes sparkled like a diamond, and whose magnificent aura was spectacular.

Sage Markandeya was naturally gifted with an epitome of knowledge. At his age of 12, a thread ceremony was performed. Despite of being happy, their parents were very sad. Sage Markandeya was able to note that his parents were always sad, and gloomy. He insisted on his parents for their sad nature and came to know that it was the boon from Lord Shiva, which made their parents be upset.

He decided to do severe penances to appease Lord Shiva. When he reached 16, lord Yama, came to take him away from the world. He put his “Mrutyupasha” on him to reap his soul. During that time, the young Markandeya was holding a Shiva Linga. Lord Shiva was very angry with Lord Yama and came out of the Linga to kill Lord Yama. With scorching anger, he killed Lord Yama.

Lord Shiva bestowed immortality and declared him “Chiranjeevi”. Sage Markendeya is believed to be living in his Sukshama Roopa, the divine power of invisibility in the Himalayan mountains.

Legends state that this event happened on the banks of the Markanda river in Kurukshetra district, where Markandeshwar Mahadev Temple for Lord Shiva was built. Many people believe that the incident happened in Thirukkadaiyur, Tamil Nadu.

According to Bhagavata Purana, Sage Markandeya prayed towards Sage Naradha. Sage Narada by the power of Lord Mahavishnu, showed him an illusion, where a small child was floating in a leaf. He described it as Lord Narayanan and the Lord of Time and death. Sage Markandeya, entered the child’s stomach and found the great cosmos, and seven universes. After seeing that, the Sage came out of the child’s mouth. Then he became an ardent devotee of Lord Vishnu, according to Bhagavata Purana.

Thus because of these great saints, the devotion, compassion and the strong feeling that God will restore negativity, thrive among the people. Many people visit the temple at Thirukadayr, and pray for longevity. Even today, the marriage ceremony, 60th marriage anniversaries are performed at Thirukadayur, believing that the lord will bestow his unfathomable blessings.