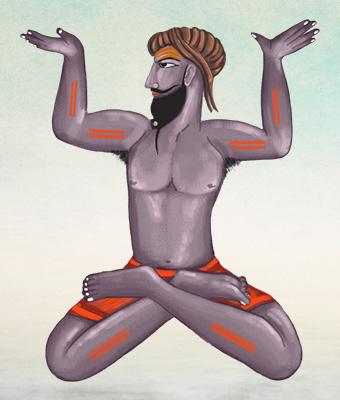 Sage Bharadwaja is one among the revered sages of Vedic Ages, and renowned scholar, economist and a distinguished physician. He is one of the Sapta Rishis, who are one among the direct descendant of Lord Brahma. His role in writing Rig Veda is commendable. He is the father of Guru Dronacharya, who was the instructor of Pandavas and Kauravas. He has a rich clan, where his grandson Ashwatamma was a warrior, and still, now many people are considered as the clan of Sage Bharadwaja, called “Bharadwaja Ghotra”.

His contribution to literature and society is commendable. His references are quoted in several religious texts of Hinduism and Buddhism. When Lord Buddha along with other Vedic scholars discuss Vedic Religion and other Saints, he mentions the name of Sage Bharadwaja and other saints. The Sacred text of Buddhism Digha Nikaya, Tevijja Sutta also has the names of the Sage Bharadwaja.

Sage Bharadwaja was born to Devarsi Brhaspati, and his mother was Mamata. Sage Brhaspati was born to Sage Aṅgirasa. These three Rishis are considered as the powerful Sages and are those who had incepted the clan of Bharatwaja. Guru Droṇacharya had a significant role in Mahabharatha, where he was the tutor and the pivotal person in history. Sage Bharatwaja’s clan has more than 1400 branches.

It is believed that Sage Bharadwaja went to exile along with Lord Rama, and Goddess Sita, to obey his father’s words. He crossed several forests and was instrumental in crossing the River Sarayu, with the help of Ghuhan. It is also believed that Lord Rama stayed in Sage Bharadwaja’s Ashram.

Another legend says that he was found in the banks of river Ganga with the radiance of thousand suns. He was found by king Marudgana and raised him with great reverence. “Asariri” or the divine voice from heaven told the king that, he is one among the notable soul, brought to earth by Gods for a divine purpose. King Marudgana also performed the sacred thread ceremony for the Sage.

Sage Bharatwaja was highly renowned. He composed several hymns, and are called mandalas and is placed in Rig Veda. He is also a renowned grammarian and had written several books in Sanskrit. He was taught grammar by Sage Brhaspati, who learned it from Lord Brahma. He spent his life propagating Vedic knowledge, and to patronize humanity. He performed several austerities towards Lord Indra and was granted several boons. He was bestowed with three lives, to learn three Vedas Rig, Vajur and Sama Veda. It is also believed that he was unable to complete the three Vedas in his three lives, and asked for a fourth birth.

Thus hid life was highly noble and spiritual. He leads by example, and his divinity has become the guiding light for the entire humanity. His pence made him highly radiant, and his quest for knowledge made him look for several sources to learn and enhance his wisdom. With his divine and mystical power, he became one of the knowledgeable and eminent scholars that people could always relate to. His contributions towards Vedas, Sanskrit language, and meditation, has become the guiding light.