Bhuvaneshwari is the Goddess, who rules over the universe. She is also regarded as the creator, apart from being the sustainer of the world. Known in many other names such as Parvati, Durga and Bhagavathi, Bhuvaneshwari is one of the manifestations of Kali, the fierce form of divine Shakti.

Kali is also known as Adi Parashakthi, the primordial, all-powerful feminine energy and is worshipped in ten forms that are known as Dasa Mahavidyas, the ten Goddesses of great wisdom. Goddess Bhuvaneshwari is considered the fourth of these ten divine feminine aspects.

What is the significance of Goddess Bhuvaneshwari? 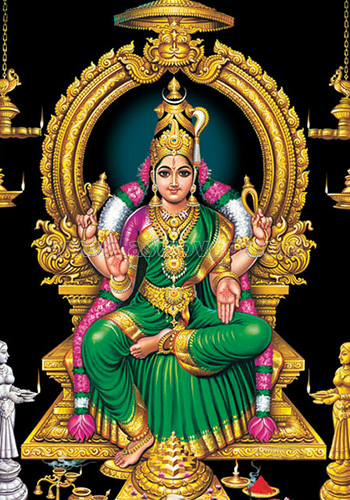 The word Bhuvaneshwari is made up of two terms, Bhuvanam and Ishwari. Bhuvanam denotes all the worlds or the universe, and Ishwari is the feminine form of the lord or the ruler. Bhuvaneshwari is thus the queen of the worlds and its sovereign ruler. The holy Vedas hail her as Aditi, the infinite and all-encompassing Mother, who holds the entire space in her cosmic womb. Thus the universe itself is her divine body, that is, she herself is the universe, while her infinite self, resides in all the living things in it. She kindles divinity in beings, and her presence makes the living things, the very representations of her own self. Bhuvaneshwari is thus, cosmos personified. Regarded as the earliest form of divine energy, she is a powerhouse, who can overrule even the mighty Navagrahas, the nine planets who decide about our destinies.

There are numerous legends reading this Goddess, one of which speaks about Lord Rama propitiating Bhuvaneshwari before his successful, final assault on demon Ravana.

She holds the Angusam or the elephant goad and the noose in two of her hands, while showering her blessings on the devotees with her other two hands.

What benefits accrue on worshipping Bhuvaneshwari?

Immensely powerful that Goddess Bhuvaneshwari is, but she also remains an embodiment of love, mercy and kindness. She regards earthly beings as her own children, gets pleased with sincere prayers and bestows her generous blessings on them. Her love is not of the usual possessive kind, but is all pervasive that frees us from illusion, attachment and suffering. Her worship will promote a cosmic vision and an universal understanding. It can also get for the devotees a captivating personality and all conquering success. It can also bestow them with a variety of benefits, like health, wealth and fortune. She can also remove obstacles, and give courage, confidence, sensitivity, sense of responsibility and emotional maturity. She also protects devotees against the negative influences of the planet Moon.