Bagalamukhi is an aggressive form of the Goddess. She is one of the manifestations of Kali, the fierce form of divine Shakti, who is also known in many other names such as Parvati, Durga and Bhagavathi.

Kali is also known as Adi Parashakthi, the primordial, all-powerful feminine energy and is worshipped in ten forms known as the Dasa Mahavidyas, the ten Goddesses of great wisdom. Goddess Bagalamukhi is considered the eighth of these ten divine aspects.

What is the significance of Goddess Bagalamukhi? 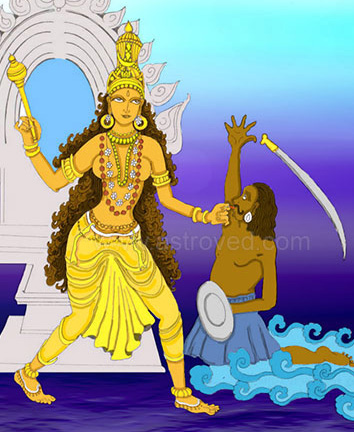 The word Bagala is a distorted form of Valga, which means the bridle or rein that is put in and around the mouths of animals like horse in order to control them. Mukha is face. Bagalamukhi is thus taken to mean as the one, who can exercise control by her mere facial expressions. This Goddess is known in more than a hundred names, Kalyani and Brahmastra Roopini being two of them. She is believed to be golden yellow in color and hence is also referred to as Pitambari or Pitambara Maa. (Pita is yellow color).

Bagalamukhi is depicted as golden complexioned and dressed in bright yellow. With a crescent Moon adorning her head, she sits royally on a golden throne, in the middle of an ocean of nectar that is covered with yellow lotuses in full bloom. She is often shown as two armed, pleasant faced, holding a club in her right hand and pulling out the tongue of a demon with the left. When shown four armed, she looks more aggressive.

She is believed to have immense power and potency, which can turn things around in no time. She is also seen as representing the dualities and opposites, like ignorance and knowledge, silence and speech, and defeat and victory.

What benefits accrue on worshipping Bagalamukhi?

Though mighty, she is a compassionate mother. Sincere devotion earns her blessings for the devotees, which can protect them from many major difficulties in life, like poverty, disease, accidents, evil designs of enemies and legal issues. She can paralyze evil energies, foil the plans of the enemies of devotees and also protect them from the malefic effects of planets Mars, Rahu and Ketu.