Introduction about the Modhera Sun Temple

The Sun temple in Modhera is one of the few shrines dedicated to Surya the Sun God . It is located at Modhera village in the district of Mehsana in Gujarat, India. Situated on the banks of the Pushpavati River, the temple consists of three parts: The Gudhamandapa (Shrine hall), Sabhamandapa (Assembly hall) and Kunda (Reservoir) which has steps to reach the bottom. It is a protected monument maintained by the Archaeological Survey of India and no worship is currently performed in the shrine. The halls of this ancient temple have elaborately carved exteriors and pillars. Several other shrines are also found within the premises. The temple today is a popular tourist center visited by people from far and near who come to appreciate the brilliant architecture and style of construction. 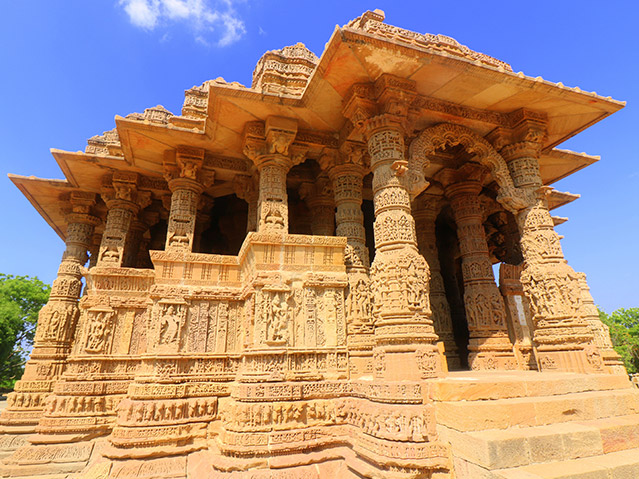 History of the Modhera Sun Temple

The temple dedicated to Surya the Sun God was built by King Bhimdev of the Chalukya Dynasty in 1026-1207. The Chalukyas are commonly referred to as Solankis and their lineage is believed to have originated from the descendants of the Sun God. Glimpses of the famous Sun temple in Konark are evident in its style of construction and architecture. This remarkable shrine was locally known as Sita ni Chauri and Ramkund. The area in the close vicinity of the temple is known as the forest of righteousness and it is believed the temple was personally blessed by Lord Rama. The temple also finds mention in the ancient Hindu texts Skanda Purana and Brahma Purana.

Significance of the Modhera Sun Temple

The Surya Kund (tank) within the temple is in the front and named ‘Surya’ after the Sun God . The water in the tank is said to be extremely pure and devotees take a dip in it before entering the main shrine. The steps leading into the tank feature a multitude of shrines dedicated to various Hindu deities, which include Lord Ganesha, Lord Shiva and Sheetala Mata among others. A huge Torana (archway) leading to the Sabha Mandap is located in the front of the tank.

The Sabha Mandap in the temple is a hall where people assemble for religious gatherings and conferences. It is open from all four sides and features 52 intricately carved pillars. These carvings recount scenes from the Hindu religious epics Ramayana and Mahabharata. Several carvings depicting scenes from Lord Krishna’s life are also featured here. The path leading to the Sanctum Sanctorum is through a passage with pillars and arches.

The Sanctum Sanctorum is the Gudu Mandap and this hall once served as the repository of the Sun God’s Idol. It is supported on a plinth shaped like a lotus. The Idol was placed in such an angle that the first rays of the Sun would shine on it. Unfortunately, the temple was desecrated and the Idol stolen by the Muslim invader Mahmud Ghazni. Miraculously, the walls of the shrine yet represent the various facets of the Sun in the monthly cycle.

Architecture of the Modhera Sun Temple

The stunning architecture of the temple is admired by aficionados across the world. It is built in the Maru-Gurjara style, also known as Chalukya Style. The Garba Griha is in a hall and another structure houses the outer hall. There is also a sacred tank (reservoir) within the temple. Both the structures are built on a paved platform, but unfortunately the roofs are in a dilapidated state. Even though many portions of the temple have deteriorated with age, it still makes for an imposing sight and the architectural brilliance shines through.

A three day dance festival known as Uttarardha Mahotsav is conducted annually at the temple by the Tourism Corporation of Gujarat during the third week of January. This classical dance extravaganza showcases the skills of the exponents and attempts are made to present it in the traditional way. The Modhera dance festival is world famous and many travel long distances just to participate in the proceedings.

Location – How to reach the Modhera Sun Temple

The Modhera Sun temple is about 25 km from Mehsana and around 106 km from Ahmedabad. Visitors can access the shrine in various ways:

By Air: The Modhera temple is about 46 km away from the Ahmedabad Airport.

By Train: The Mehsana Railway Station is around 26 km away from the temple.

By Bus: Modhera is well connected by bus service to neighboring towns and cities.