Pandharpur is a city located in Maharashtra, India and a well-known Hindu pilgrimage center. It is considered to be the religious and spiritual capital of the state due to the hallowed presence of the Vithoba Temple. This magnificent temple is the abode of Lord Pandurang, Vitthal or Pandhari,who is revered as the Supreme God of the Universe. The deity is an Avatar ofLord Krishna who is in turn Lord Vishnu in mortal form.

The image of Lord Krishna’s consort Rukmini is also present in the temple. The shrine is located on the banks of the river Bhima in Sholapur district and an air of reverence pervades the temple and its surroundings. People from all the country visit the temple even by foot just to have a glimpse of Lord Vitthal. The temple is a hugely popular tourist and religious destination, drawing people from all four corners of the world. 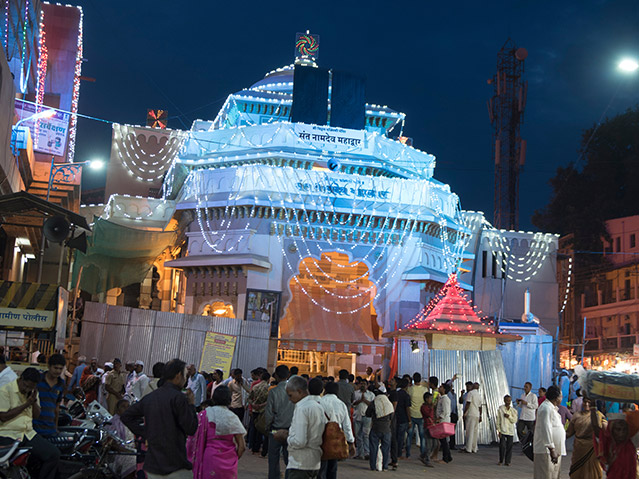 Steeped in the mists of time, it is difficult to pinpoint the exact year of construction of this hallowed shrine. The location of the shrine is in the middle of the Vitthal Hill and it was reportedly a small structure during the Yadav period. It gained prominence somewhere in the middle of the 13th century and several parts of the temple were built in different times. It is very easy to discern this aspect as the style of construction of many parts greatly varies.

The Warkari religious sect of people walk to the Vithoba temple in groups called Dindi to reach on Aashadhi Ekadashi and Kartiki Ekadashi. After a dip in the Chandrabhaga River, they enter the shrine and join the queue for a Darshan of Lord Vitthala. The unique feature of this temple is that every devotee is allowed to touch the feet of the Idol and seek his blessings, it also hold the distinction of being the first temple in India to invite women and people from backward castes to officiate in the ceremonies as Priests.

The Samadhi of Namadev and Chockamela is at the entrance of the temple and the main access faces the Chandrabhaga or Bhima River. Pilgrims pray to the devotees before entering the temple and are greeted with a Small Ganesh Shrine. The entry then leads to a small hall where Bhajans are performed and there is a shrine for Garuda and Hanuman in the same hall. This then leads to a stairway after ascending which, one can view Lord Vitthala. People then wait in queue to touch the feet of the Lord, after which they again go through an entrance which leads to several small shrines of Devotees, and then go on towards the Image of Lord Pandurang.

There are also shrines for Rukmini Devi, Sathyabhama Devi, Radhika Devi, Lord Narasimha , Lord Venkateshwara, Goddess Mahalakshmi, Nagaraj, Ganesha and Annapoorna Devi. Devotees can then head for another small Mandap where they can replicate Lord Krishna’s antics as a cowherd. This adds a lighter vein to the religious fervor of the Darshan and many enjoy this exhilarating experience.

The temple is built in the North Indian style of temple architecture which is typical of Hindu shrines in the northern part of the country. The numerous shrines in the complex were built at different times and pays tribute to the skills and craftsmanship of the artisans.

Millions of people gather every year on the occasion of Devashni Ekadashi to witness the Mahapooja of Lord Vittal and Rukmini. Many people go by foot and in groups from all parts of the state. The temple comes alive on four festive occasions every year, with many taking part in the festivities. These festivals are held in the month of Aasa, Karthik, Magh and Shravan. Many believe these festivities have been carried out in the temple for almost 800 years.

The Palkhi tradition was started by some prominent saints almost 1000 years ago and this practice is still followed till date. The followers of these saints are called Warkaris who conduct the celebrations through dance and kirtan, emulating the famous Saint Tukaram, who hailed from Maharashtra.

Benefits or Blessings of the primary deity- Pandharpur Vitthal Temple

Devotees throng the temple for a Darshan of Lord Vitthala and come from far and wide to seek his blessings. The temple is located on the banks on the Chandrabhaga River and it is believed that a dip in the holy waters is believed to wash away sins and cleanse the soul. Lord Vitthal stands steadfastly by his devotees and blesses them with material and spiritual prosperity. Many touch his feet to gain his favor to lead a life of joy and peace. The Lord especially blesses those who take care of their parents and leaves no stone unturned to grant them their wishes.

The Pandharpur Vitthal temple is accessible by several modes of transport. The temple doors open at 4 A.M in the morning and closes by 11 P.M at night.

How to reach Pandharpur

Rail travel: Pandharpur is well linked by rail and several trains ply at frequent intervals to and from Pandharpur.

By Air: The closest Airports are Pune and Solapur.