Kalamassery Mahaganapathy Temple is an important place of worship in the state of Kerala. It is located in Kalamassery town, a suburb of the city of Kochi. It is dedicated principally to Lord Ganapathy, and also has shrines for deities like Shiva , Parvathi , Subrahmanya and Navagrahas. 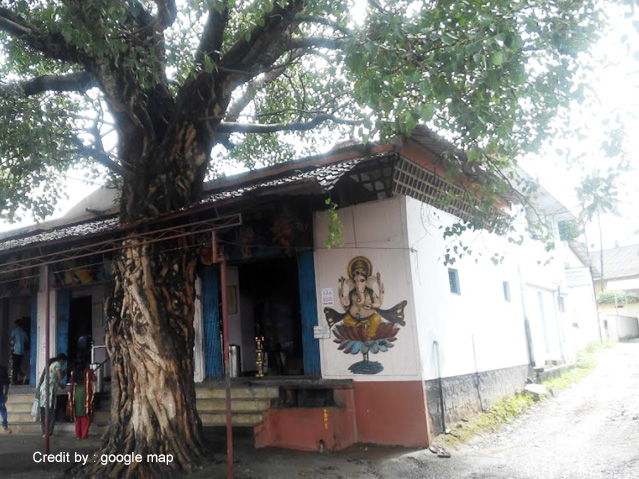 This temple is one of relatively recent origin. Raghunatha Menon was a prominent citizen of the place, who was pious and religious minded and it was he, who built this temple in the year 1980. It was originally a simple structure made of concrete, where the idol of Lord Mahaganapathy was installed in the main sanctum. The temple also had shrines for his brother Lord Subrahmanya and the Navagrahas, the nine planets. Sri Menon planned for the renovation of the small temple in the year 2000 and also launched the project for its expansion with traditional architecture and with the addition of shrines for some other Gods and Goddesses. But, God’s will seemed different, as he passed away the very next year and didn’t live to see the completion of his project. It was left to his children to carry forward the plans and bring the project to a successful completion. They also constituted the Mahaganapathy Temple Trust for managing the activities of the temple.

Structure of the Temple and Worship

The simple, original temple had only two west-facing concrete structures side by side, which contained the shrines of Lords Mahaganapathy and Subrahmanya, and also the Navagrahas. An elevated structure was added in 2000, in which shrines for many other deities were constructed. These include Lord Shiva, Goddess Parvathi, Dakshinamoorthy and Chandikeswara. The stairs leading to this raised level was put up in between the two old structures at the ground level. The temple which is without the compound walls, now covers an area of around 5000 square feet. A Peepal, that is, Ashwatta tree in front of the Ganapathy shrine adds to the serenity of the atmosphere.

This small temple is located on the busy Kalamassery – Eloor road and there is not much of a space between the temple entrance and the carriageway. The temple as such, appears to be perched right at the edge of the road and hence has come to be referred simply as ‘Road-Side Ganapathy’. Whatever be the nomenclature it is called by, the temple is held sacred by the people of Kalamassery and the surrounding areas, and remains a very popular place of worship.

Celebrations in the Temple

While devotees in large numbers offer prayers daily to Mahaganapathy here, many festivals like Ganesh Chaturthi and special events are conducted, right through the year. Lord Ganapathy has an elephant face. Hence, all elephants are regarded as aspects of this Lord only and are honoured in many of the Kerala temples. Large scale feeding of the elephants is known as Aanayootu and this spectacular event is carried out in the Kalamassery Mahaganapathy Temple with a lot of gaiety, on the first day of the Karkkidakom Malayalam month every year, accompanied by the Ashta Dravya Maha Ganapathy Havan ritual. Gaja Pooja, the ceremonial worship of the elephants is also done here with piety, once in four years.

Kalamassery is on the outskirts of Kochi city and is less than 20 kms from the International airport. It is a busy industrial area, through which runs Periyar river. The port city of Kochi is the largest township in Kerala and is well connected by air, rail and road with all parts of the country. Kalamassery Mahaganapathy Temple is in a prominent place and can be reached easily by any form of public or private transports.