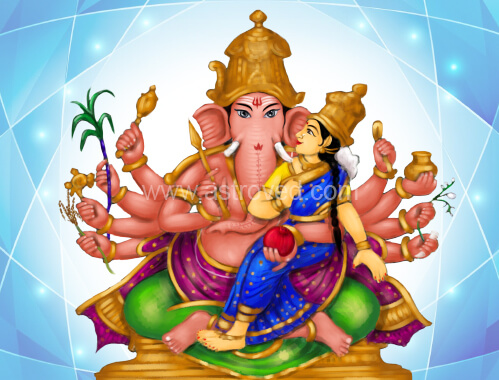 Maha Ganapati is regarded as the 13th among the 32 different forms of Ganapati. The word ‘Maha’ simply means ‘great’ and can represent a distinguished status too. Maha Ganapati is hence, ‘the great Ganesha,’ who holds special significance. In this form, he has some similarity with his father Lord Shiva , as he too has three eyes and also sports a crescent Moon on his head. He is bright red in color, has seated his consort on his left lap and though single-faced, has as many as ten hands. He holds in them, his own broken tusk, a discus, a mace, a noose, a sugarcane bow, a sprig of paddy, a lotus, a blue lily, a pomegranate fruit and a Ratna Kumbha (pot of precious gems).

This form of Ganesha can be seen as a painting in the Kerala capital Thiruvananthapuram and as a sculpture in some temples in Mysore region, where all the 32 Ganapati forms are on display. Maha Ganapati can also be worshipped in an idol form, in the famous Krishna temple at Dwaraka, in the Gujarat state, where none other than Lord Krishna himself is said to have offered prayers to him.

Star Poosam, also known as Pushya Nakshatra is said to be related to this Ganapati.

Maha Ganapati is a very important aspect of Lord Ganesha, significant and powerful. Worshipping him is believed to bestow on devotees immense merit and good prosperity. Praying to him daily with sincerity can make devotees attain glory in their respective fields.

The mantra, which reads as under in Sanskrit, sings the praise of this ‘Great Ganapati’, describes his form and prays for his grace and blessings.

Chanting the Maha Ganapati mantra with faith, can be an effective means of propitiating this illustrious Lord.