The Ekvira Aai Mandir is a famous Hindu temple and a major pilgrim center located near the Karla Caves in the vicinity of Lonavala in Maharashtra, India. The deity is also worshipped as Renuka and is the Mother of Chiranjivi or the immortal sage Parashurama, an Avatar of Lord Vishnu. The worship is carried on right next to the caves, which was once a major center of Buddhism. The main deity of the temple is Ekvira Aai and she is flanked on the left by Jogeswari Devi. Ekvira Aai is worshipped by Daivadnya Brahmins and she is also the Kul-Devi of the Koli and Sunar Communities. The temple is also frequented by the Aagri-Koli people and the Koli (fishermen). 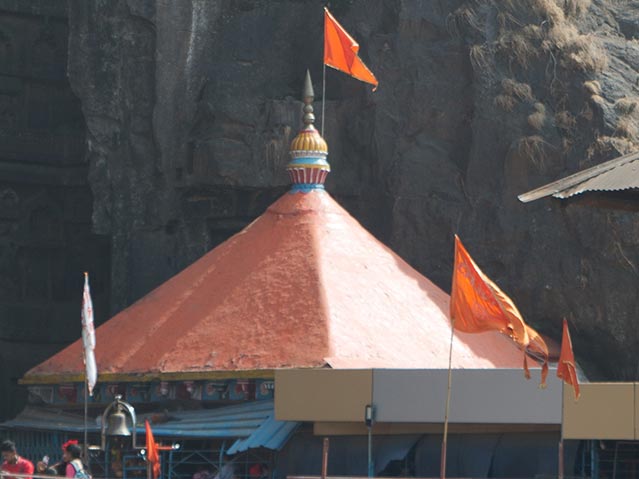 The temple originally had three similar shrines built in a row, all facing west. Currently, only the central and southern shrines are preserved in full, and the rest exists only on plan. The Mahamandapa, Varshamandapa and Gopura are situated right in front of these three shrines and all three sanctums are encircled by sixteen sanctums. Today, the Ekvira Aai temple is a popular tourist center which draws crowds from all over the Globe.

This temple is believed to have been constructed by the Pandavas during their exile in the forest during the Mahabharat times. The Goddess is said to have appeared before them and directed them to build a temple for her. She also commanded them to complete the construction overnight to test their dedication. Working feverishly throughout the night, the Pandavas were able to complete the task and this pleased the Devi immensely. She blessed them with a boon that they would not be discovered by anyone during their period in exile.

The Ekvira Aai Temple is famous as a center of animal sacrifice and the Koli tribal people offer goats/chickens to appease the Goddess. This ritual holds great significance for the tribals since they believe that it pacifies the Goddess and keeps them protected from harm and evil.

Another prominent feature of the temple is that one needs to ascend 500 steps to reach the shrine. There is also a shrine for the holy feet of the Goddess halfway down the hill.

The main festivals celebrated in the Ekvira Aai temple are Navratri and Chaitri Navratri , with devotees flocking to the temple in droves. The entire complex is decorated and tinted with colors, along with flowers and lights during the 9 day Navratri festival. Koli dances and music with a local folk touch is the flavor of the season and the temple literally comes alive with these grand festivities. A fair is also held in front of the temple complex during Asvin Suddha Pratipada to Dasami for nine days.

Benefits or Blessings of the Ekvira Aai Temple

The Goddesses is believed to possess great powers and she protects her devotees from harm and evil. She is said to be the very epitome of Shakti and grants her worshippers, peace and prosperity.

Reaching Ekvira by Air The nearest airport to Ekvira Aai temple is located in Mumbai and Pune. Taxis, trains and buses ply frequently from these cities to the temple.

Reaching Ekvira by Train The railway station in Lonavala is the nearest rail link to the temple. Almost all trains plying from Pune to Mumbai halt at Lonavala and one can catch a bus or cab from the station to reach the temple.

Reaching Ekvira by Road The Ekvira Aai temple is easily accessible by trains, buses and auto rickshaws from Lonavala. Visitors have the choice to decide on the best mode of transport they prefer depending on their financial considerations and other factors.