For the first time, this Vasant Navaratri (Spring Powertime of the Goddess), AstroVed will be invoking Bala Tripurasundari, the child form of the Supreme Goddess of the three worlds. As Bala Tripurasundari is an adorable child form, you can easily connect with her and ask anything you desire, and it shall be fulfilled with her Divine grace. Experienced Vedic priests practicing Sri Vidya system of worship will be chanting her mantra 10,000 times on the last day for prosperity, protection, wealth, wisdom, wish-fulfillment, and victory blessings during Vasant Navaratri, the spring powertime of the Goddess.

Bala Tripurasundari: Child Form of the Goddess of Three Worlds

According to the sacred text, Devi Mahatmyam from Brahmanda Purana, Bala Tripurasundari is the child form of the supreme Goddess Lalita Tripurasundari, the ruler of the three worlds. Also called Bala, Bala Tripuradevi, she is revered as a 9-year old girl and is hailed as the epitome of eternal beauty, power, wisdom, courage, and compassion. Her radiance resembles the rising Sun, and she is a Divine combination of Goddess Saraswati’s wisdom, Goddess Kali’s powerful charismatic energy, and Goddess Lalita’s prosperity. Scriptures mention that propitiating her as Vasanta Bala Tripura Sundari can bestow beauty, wealth, fame, fortune, material comforts, and overall abundance.

Devi Mahatmyam highlights the origin of Bala Tripurasundari from the golden armor of Lalita, the supreme Mother, to put an end to the demon Bandasura’s 30 sons. Bala always resided at the foot of Goddess Lalita and is considered as the fourth eye and vital breath of the supreme Goddess. According to the Sri Vidya system of Goddess worship, one who wishes to reach Lalita must appease Bala Tripurasundari and seek her blessings and approval first. 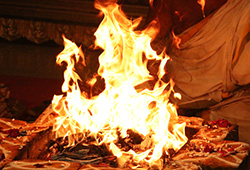 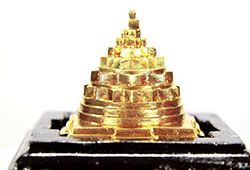 As per traditional practices, performing Abishekam with honey and Pushpanjali (offering flowers) to Maha Meru, the three-dimensional, sacred geometry of Sri Chakra that embodies Supreme Goddess energy can bring relief from illness and bestow good health, abundance, fame, and protection. 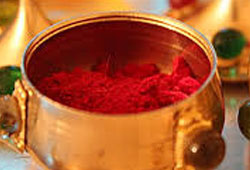 As per Powerspot practices, performing Archana with Kum-Kum to Tripurasundari can dispel all evil forces, give financial abundance, affluence, prosperity, fulfill desires, and grant victory in all endeavors. 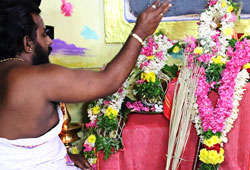 As per Kerala Powerspot practices, chanting sacred mantras while offering flowers to Goddess can strengthen your immune system, increase your vitality, and remove conditions like anemia. This ritual acts as a wholesome remedy to enhance both physical and psychological endurance. 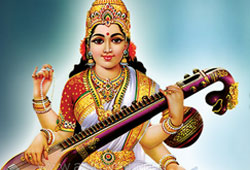 As per sacred texts, performing an Archana by chanting Saraswati Ashtottaram can help excel in education and career and enhance creativity, gain higher wisdom and intelligence, academic mastery for students and talents in art forms. 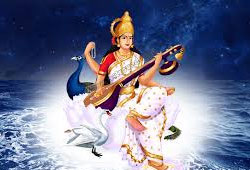 As per Powerspot belief, performing Archana here can grant wisdom, knowledge, and success in arts, crafts, & higher education, promote the reunion of couples, and give job promotion. 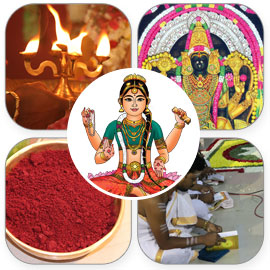 You will receive sacred grey ash powder from the Homa and Kum-Kum (Red Vermillion Powder), which will be blessed in the rituals. Keep this on your meditation altar and wear it on your forehead during meditation or at other times to expand the Divine blessings into your life.

Please Note: Your prasad will be shipped one week after the entire set of rituals is performed from Chennai, Tamil Nadu. For international shipping, please allow 2 – 4 weeks for delivery.