Introduction about the Chintaman Ganesh Temple

The Chintaman Ganesh temple is an ancient Hindu temple located in the city of Ujjain, in the north-western state of Madhya Pradesh in India. It is one of the biggest temples in India and of Lord Ganesh in Ujjain. This magnificent temple built entirely of stone, is now in the middle of a bustling market. The Idol of Ganesh worshipped in this temple is believed to be Swayambhu (self-manifested). Ganesha is accorded the status of the Lord of beginnings as per Hindu beliefs and revered for his propensity to remove obstacles & hardships. No auspicious occasion begins without propitiating Lord Ganesh first and his presence is a must in all ceremonies. Such is the power of the Elephant God that even the Gods acknowledge his prowess and accept his pre-eminence. The image of Ganesh is flanked by his consorts Riddhi and Siddhi, who enhance the Lord’s power with their presence. The temple also houses the Image of Lord Vishnu , and both the deities are worshipped with great devotion. This popular shrine attracts visitors from all over India and the Globe and is a must-visit pilgrimage center for devotees. 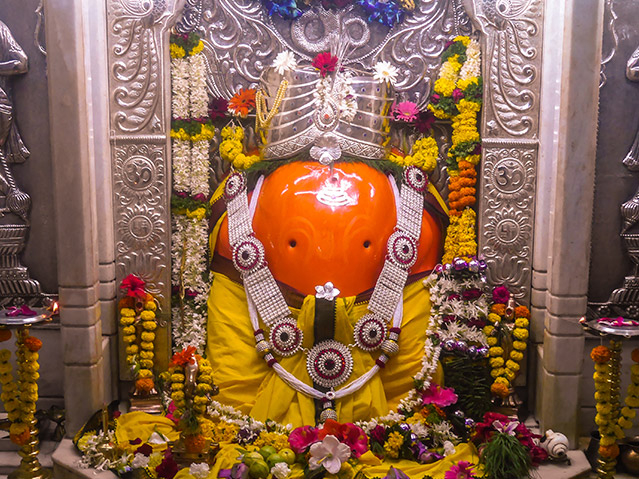 History of the Chintaman Ganesh Temple

The origins of the temple are steeped in the mists of time, but the Paramara rulers of Malwa are credited with building the structure during the 11th and 12th centuries. It was however later renovated by the Maratha kings and the structure as it stands today is believed to be around 250 years old.

Significance of the Chintaman Ganesh Temple

Lord Ganesh was referred to as Chitraharan in traditional times, which literally translates to remover of all worries and tensions. Ganesh is also venerated as Vigneshwara, the one who drives away grief and misery. Ganesh is also locally known as Chintaman, a term which applies to Lord Vishnu , the preserver and protector of the Universe. Innumerable People flock to the Chintaman Ganesh Temple to get the blessings of the Lord.

Architecture of the Chintaman Ganesh Temple

The appearance of the temple clearly signifies that it is not of recent origin and suggests it dates back to an ancient era. Nonetheless, the temple retains its charm till date and in fact has only acquired more prominence. The beautifully carved pillars in the assembly hall bear witness to the artistic magnificence of ancient times. The pristine sanctity of the temple is still maintained and it is more intensified by the belief of the devotees.

Wednesday is considered Lord Ganesh’s ruling day and the temple witnesses’ heavy turnout on this day. Offerings of Modaks, coconuts, flowers and scented sticks are made to the Lord. People form huge queues and await their turn patiently to have a glimpse of their beloved Elephant God on this day. Ganesh Chaturthi, the birthday of Lord Ganesh, is the main festival celebrated in the temple and the entire complex comes alive during this period. Thousands of people visit the temple to attain his blessings and take part in the proceedings.

Benefits or Blessings of the primary deity- Chintaman Ganesh Temple

Praying to Lord Ganesh is said to remove obstacles and he is worshipped first, before launching any new venture or even conducting a nuptial ceremony. Worshipping Ganesh is said to protect against adversity, dispel fear and helps one gain material prosperity & success.

Location – How to reach the Chintaman Ganesh Temple

By Air: The nearest Airport is in Indore, around 53 km away.

By Train: There are several direct trains running from prominent cities of India to the city of Ujjain.

By Bus: Ujjain is well connected with neighboring towns and cities by bus service.