Thirunallar Saneeswaran Temple is dedicated to Sani, the Planet Saturn. This is situated in the town of Thirunallar. It is one of the Navagraha Sthalams, temples that enshrine the nine planets. The presiding deity is Lord Shiva, called Darbharanyeswaran, while Goddess Parvati is revered as Bhogamartha Poonmulai Amman. The word ‘Thiru’ denotes revered, and the word ‘Nala’ denotes King Nala, while the word ‘Aaru’ denotes healing in Tamil. Thus, Thirunallar denotes a place that healed King Nala. 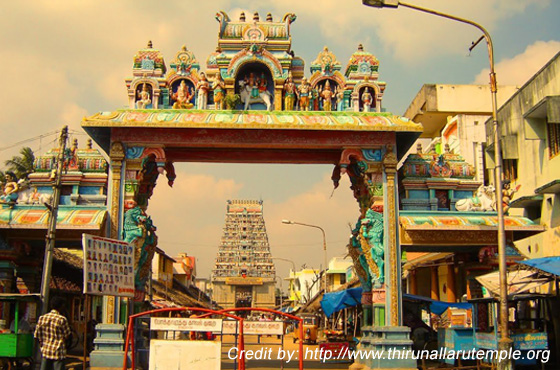 Once there lived a King, Nala, who ruled the kingdom of Nishada. He was a mighty king who wanted to establish a huge dynasty. His kingdom prospered greatly under his rule. King Nala wanted to marry Princess Damayanti, daughter of King Bhima, ruler of Vidharbha. King Nala sent his message to Damayanti through a swan, and they fell in love. Meanwhile, King Bhima arranged a Swayamvaram (a ceremony where girls can select their suitors) for his daughter. Princess Damayanti selected King Nala as her suitor and married him. King Kali was jealous of Nala, as he could not marry Damayanti. So, he decided to trouble King Nala.

Sani got the opportunity to trouble King Nala when he did not wash his feet properly while preparing for his prayers. Sani started giving problems to King Nala. King Kali entered the mind of King Nala’s brother, Pushkara, and encouraged him to challenge Nala to a game of dice. In the game, King Nala lost his kingdom and left for the forest with his wife.

King Nala abandoned his wife as she lay sleeping. Princess Damayanti started living in her father’s kingdom with her kids. King Nala became ugly when the serpent Karkotaka bit him. He became a cook and charioteer for the emperor Rituparna.

After 12 years of Sani’s Period, Nala got back his original form by wearing the mystic garment and got back all the things he had lost. He met Sage Bharadwaja and was advised to go to Thirunallar with his family and have a dip in the Brahma Theertham. He entered the temple to pray to Sani for relief from the negative effects.

This temple is built in the style of Chola Architecture. It has an imposing temple tower that welcomes devotees. The first Rajagopuram is of seven tiers, and the second Rajagopuram is of five tiers. The temple tank is situated 2 km away from the main temple. The idol of Lord Shiva in this temple is self-manifested. The idol of Sani has only two hands; normally, he is depicted with four hands.

Sani Peyarchi, which is the transit of Sani, is celebrated as a famous festival. Apart from that, Maha Shivaratri is an important festival dedicated to Lord Shiva. The Brahmotsavam festival in Vaikasi celebrated during May or June, is an 18-day festival. Aadi Pooram, Ganesha Chaturthi , Soorasamharam festival, etc., are highly celebrated in this temple.

People get a lot of blessings when they offer prayers to Sani. People worship in this temple to enhance the lifestyle and reduce the negative effects of Sani. Many people would also appease him to have a problem-free life and to bestow a life with richness and positive effects. People with the malefic placement of Sani in their birth charts also offer their prayers here to seek relief from Sani’s adverse impact.

How to reach Vaitheeswaran Temple

The nearest railway station is situated in Tiruchirapalli, which is almost 147 km away from the town.

The nearest Railway station is located in Peralam, which is on the Karaikkal Railway route.

Thirunallar Temple is 59 km from Kumbakonam. The bus stop is situated very near to the temple.