Introduction about the Ranganathaswamy Temple

The Sri Ranganathaswamy temple is a sacred Hindu shrine located in Srirangam, Tiruchirapalli, in the South Indian state of Tamil Nadu. Situated on an idyllic island in the River Cauvery, the shrine is also known as Thiruvarangam and dedicated to Lord Ranganatha, an Avatar of Lord Vishnu who is depicted in a reclining posture. This highly revered shrine finds mention in the ancient Hindu religious text Divya Prabandam and is one of the 108 holy Divya Desams of Lord Vishnu . The temple embraces the Thenkalai tradition of worship and is the largest functioning Hindu temple in the world. 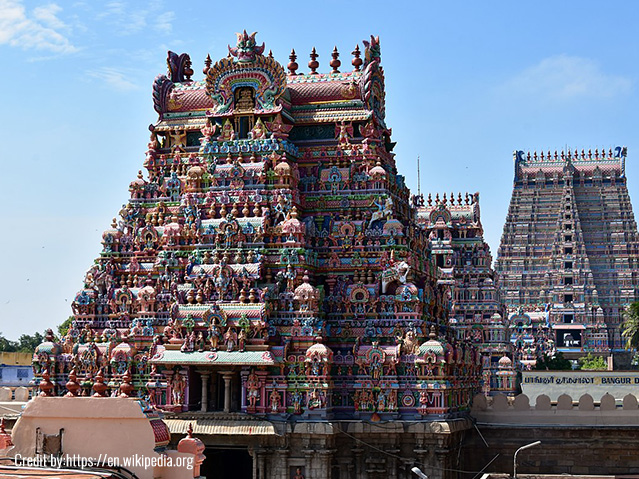 It is also counted as one of the most eminent Vaishnava temples in South India and boasts of a rich historic and religious legacy. The temple has suffered several natural calamities and invasions by marauding Muslim and European armies. These hostile forces disregarded the religious significance of the temple and used it for their own selfish interests. The temple has however survived these onslaughts and today it is a popular tourist and pilgrim center, attracting hordes of visitors from all over the world.

History of the Ranganathaswamy Temple

Archaeological inscriptions found in this sprawling shrine date back to the 10th century AD, suggesting it was under the influence of the Chola, Pandya, Hoysala and Vijayanagar dynasties. The idol of the deity was recovered by a Chola king from the dense undergrowth purely by chance while out on an expedition. He then went on to establish the Ranganathaswamy temple as one of the largest temple complexes in the world. Historians attribute the renovation of the temple to several South Indian Kings in different periods of time, with due respect given to maintain the sanctity of the deities. Great care was taken at all times to maintain and continue the traditional customs of the shrine. The temple suffered atrocities by marauding Muslim invaders under Malik Kafur in 1310-1311 and the idol was spirited away to Delhi. Undeterred, the devotees of the Lord ventured to Delhi and managed to recover the Idol from the Emperor.

Significance of the Ranganathaswamy Temple

According to Alwar traditions, the shrine is perceived to be one of the eight Sywayambu Kshetras of Lord Vishnu . Along with seven other prominent temples in India, the presiding deity here is believed to have manifested on its own. The temple is also a part of the five sacred Pancharanga Kshetrams dedicated to Lord Ranganatha which are situated on the banks of the Cauvery River.

Non-Hindus are welcome to visit the shrine up to the second outer courtyard but not encouraged to enter the gold topped Sanctum Sanctorum.

Architecture of the Ranganathaswamy Temple

This magnificent temple is constructed in the South Indian Tamil style of architecture with several unique characteristics. It is encircled by 7 massive concentric walls called ‘prakarams’ with a collective length of over 6 miles. The 21 gopurams (towers), 39 pavilions, fifty shrines and the 1000 pillared hall are the highlights of this shrine. The complex also features several small well-laid water bodies. Several shops, restaurants and flower stalls are also situated in the outer courtyard.

The Rangnathaswamy temple is a highly revered shrine and celebrates several Hindu festivals with great pomp and fervor. Vaikunta Ekadasi which falls in the month of Margazhi, is the primary festival of the temple and the entire complex comes alive during this 20 day extravaganza. The Paramapada Vaasal (gate to paradise) is opened only during this time and entering this holy gateway especially on Adhyayanotsavam to get a glimpse of the Lord, is said to ensure a direct entry to Heaven without having to go through the Karmic cycle.

The gold ornament cleaning festival is held annually and called Jyestabisheka. It is celebrated in the Tamil month of Aani in June-July and the idols of the deities are brought in large vessels of gold and silver after due ablutions.

Brahmotsavam is another major occasion of celebration lasting for three days, when sacrificial offerings are made to the Lord. A procession is taken out in the evenings and the deity is taken to a garden opposite the temple on the second day. On the third day, the deity is taken in a palanquin to a village on the opposite shore of the Cauvery River.

A chariot festival called Rathothsavam is held annually during the Tamil month of Thai in January –February. The Utsavar deity is taken round the temple in the temple car.

Chitra Poornima is also a major occasion for celebration in the temple. Vasanthothsavam is a festival which has been celebrated in the temple from the mid-15th century and falls during the month of Vaikasi in May-June.

Shrines in the Ranganathaswamy temple

The temple complex houses several shrines and monuments of Vishnu in various Avatars and depicts him several positions. A Ranganayaki shrine in the second precinct of the temple houses three images of the Goddess. The complex also houses shrines for various Hindu saints. There is a separate shrine for the divine physician Dhanvantri who is also an Avatar of Lord Vishnu.

Administration of the Ranganathaswamy temple

The day-to-day affairs of the temple are managed by the Hindu Religious and Endowment board of the Government of Tamil Nadu. An Annadhanam scheme wherein free food is distributed to over 200 devotees every day is implemented by the trustees. The entire expenditure is borne by devotees who contribute generously.

Location – How to reach the Ranganathaswamy Temple

The temple is located in Tiruchirapally which is accessible by various modes of transport.

By Air: The Airport in Trichy is about 15 km from the temple.

By Train: The Railway Station in Trichy is around 9 km from the temple.

By Bus: Trichy is well connected by with neighboring towns and cities by bus service.

Local Transport: Taxis, buses and three wheelers are available from most points of the city.