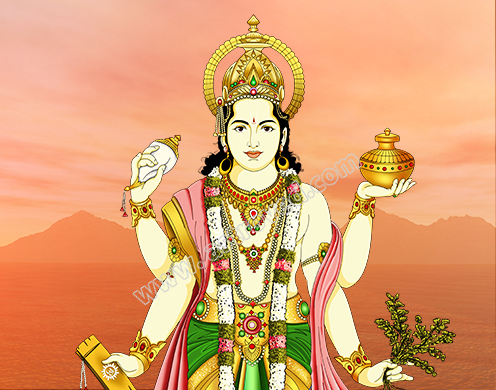 Dhanvantri is the divine physician or the doctor of the Gods. He is regarded as an incarnation of Lord Vishnu, the God of protection and sustenance. He is believed to be the one, who gave us Ayurveda, the ancient system of medicine and hence is gratefully remembered as the father of Ayurveda. According to legend, he materialized into being during the churning of the cosmic ocean of milk to save the celestial beings.

Scriptures usually depict Dhanvantri in a divine form. With a handsome appearance, he is four-armed, in one of which he holds a well-decorated pot containing the precious Amrut (nectar). In another hand, he holds a leech, the blood-sucking insect, which is believed to have played a crucial part in the ancient systems of medical treatment. There are also depictions, which show him as Lord Vishnu , himself with his usual conch and discus, while in some others, he holds a book of scriptures.

Thus, Lord Dhanvantri provided to the world a great blessing in the form of Amrut that was believed to have had the power to cure any ailment and give eternal life. It is no wonder he is hailed as the Vedic Physician, the great doctor, who gave to the world a powerful system of medicine, known as Ayurveda. Thus, Lord Dhanvantri is also termed as the Father of Ayurveda.

Bhagavata Purana gives out an interesting legend on the advent of Dhanvantri. Once, the Devas (celestial beings) and Asuras (demons) joined hands and churned the ocean of milk, with the help of Mandara Mountain and Vasuki, the great serpent, for obtaining Amrut, the elixir of life. Many precious things came out from the ocean, one after the other. Ultimately, Lord Dhanvantri emerged out in all his glory, holding in his hand a pot containing the invaluable and much sought after nectar of immortality. Dhanvantri is believed to be the incarnation of none other than Lord Vishnu , himself, who played a pivotal role in the entire ocean churning process. While he assumed the form of a great tortoise and supported the sinking mountain, the Lord himself took the form of Dhanvantri and brought out the all-important Amrut, to the great delight of all concerned. The Amrut was to be shared supposedly by both the parties, the Devas and Asuras, but the Lord had the last laugh, when he came again as Mohini, the bewitching beauty, denied the elixir to the demons and shared it entirely with the celestials, for the good of the universe.

There are a few temples dedicated exclusively to Dhanvantri , especially in the Southern part of the country. Of them, the one in Thottuva in Kerala is the most famous. Incidentally, this place is well known for the Ayurveda practice too. There are also well known Dhanvantri shrines in Tamil Nadu, in the famous Ranganathaswamy temple at Srirangam and Varadarajaswamy temple at Kanchipuram.

Lord Dhanvantri’s blessings can help devotees to seek relief from serious ailments and incurable diseases, and also get relieved of physical sufferings. He can bestow with good and robust health, and help lead a long and happy life.

Dhanvantri is believed to have emerged on the day of Dhanteras, which falls a few days before Diwali, the festival of lights when people worship him especially for gaining good health and longevity.

This homa (Fire Lab) is performed to honor Lord Dhanvantri, the divine physician and an incarnation of the Preserver of the Universe, Lord Vishnu. He materialized into being during the churning of the Cosmic Ocean of milk with the jar of nectar to reinvigorate the celestial beings.

Lord Dhanvantri is the Vedic Physician; he cures health ailments and protects the wellbeing of his children in this Universe. He encircles you with his positive vibrations which can unchain you from any kind of health disorders.