The temple of Goddess Angala Parameswari is situated in the town of Melmalayanur, which is located 32 km away from Gingee in the Viluppuram District. Goddess Parvati the consort of Lord Shiva who was incarnated as Angala Parameswari on a hive in this town. She is considered as the mother of the universe, and the luminant light which protects the universe from the wrath of Kali Yuga. Among four Yugas, the life in the Kali Yuga is considered challenging, and it needs the divine blessings from the omnipotent to face the trials and tribulations. 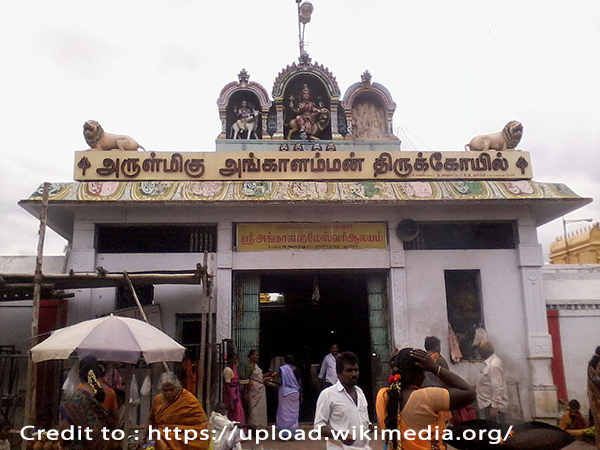 Goddess Saraswati, the consort of Lord Brahma once cursed Lord Shiva and Goddess Parvati for beheading Lord Brahma. As Shiva and Brahma both had five heads each, Parvathy was utterly confused and requested Lord Shiva to cut off one of the heads of Lord Brahma. Once when the head of Lord Brahma was cut, it got affixed to the hands of Lord Shiva. He was cursed to be hungry, sleepless, and even roam amidst the graveyard. Whatever was put on the skull was eaten by severed Brahma’s head, leaving Lord Shiva highly parched, and hungered. Pavati was cursed to become ugly, and all her assistance would become demons. The only redemption was to go to the town of Melmalayanur, and take birth as a serpent, and dip in the holy temple tank. Thus she got rinsed off her sins and gained back her glory in this shrine. Since then she decided to grace her devotees from this town.

Goddess Angala Parameswari is considered as the primal force of this universe, which created the cosmos, and the holy trinity. She executes important actions like creation, maintenance, and annihilation. The holy trinities are her hands, and she controls three important things like Wish, Action, and Wisdom. She is the confluence of both male and female characters, where the right side is taken as the female, and the left side is taken as the male. Thus when two forces combine, the universe is created, and all other new creations are the consequences of amalgamation.

The temple is built in the Dravidian style of architecture. The temple has a compound wall made of granite stones, enclosing all the shrines. The Dwajasthambam or the flagpost is kept opposite to the entrance of the shrine. Balipeetam is kept between the flagpost and the entrance. Goddess Angala Parameswari graces the devotees in her sitting posture.

There are several festivals celebrated in this shrine. The most important festival is the “Simimasana kollai”, which is celebrated during the months of February-March. During this festival, the devotees cook a large quantity of food made of grains and set it on the burning ground. During the days of Ammavasai (New Moon day), a lot of devotees gather around the temple and gain the blessings of the goddess. The other important festivals during the month of Chitrai are Tamil New Year and Laksha deepam where the entire temple is decorated with small lamps. Masi Car festival is celebrated with a lot of importance, where the temple chariot is ambulated on the streets, with the deity mounted on it. The other important festivals are Deepavali, Thai Pongal, Navratri, and Shiva Ratri.

Melmalayanur Angala Parameswari is the energy and the source of creation. She was the energy, which created the deities of Holy Trinity, Lord Brahma, Lord Vishnu, and Lord Shiva. Thus she blesses her devotees to have a life filled with her grace, which can evade any challenge and gain victory. People worship in this temple for the boon of progeny, marriage, and to have a good understanding between the couples, and to have a happy life.

The nearest airport is in Chennai, which is 129 kilometers away from the shrine.

The nearest Railway station is Polur which is around 31 kilometers from the shrine.

Melmalaiyanur has several buses connecting it. The frequency of the buses is also high. Other modes of transport like Taxies and Cabs are also available.

Every day the temple opens at 5 am and closes at 9 pm.