Introduction about the Lepakshi Veerabhadra Temple

The Veerabhadra temple is an ancient Hindu shrine and pilgrim center located in the town of Lepakshi in the Anantapur district of Andhra Pradesh, in India. The presiding deity is Lord Veerabhadra Swamy, a fearsome form of the mighty Hindu God, Shiva. The temple is famous for its carvings which were created by the artisans of the Vijayanagara Empire. The detailed fresco paintings are well preserved and depict scenes from the Ramayana, the Mahabharata and the Puranas. Most of the surface area of the temple is etched with elaborate carvings and paintings. The monolithic statue of Nandi the Bull lies a little away from the temple and is reportedly one of the largest in the world. The temple is regarded as a monument of national importance and protected by the Central Government. This popular shrine is a much visited religious site and attracts visitors from far and wide.

History of the Lepakshi Veerabhadra Temple 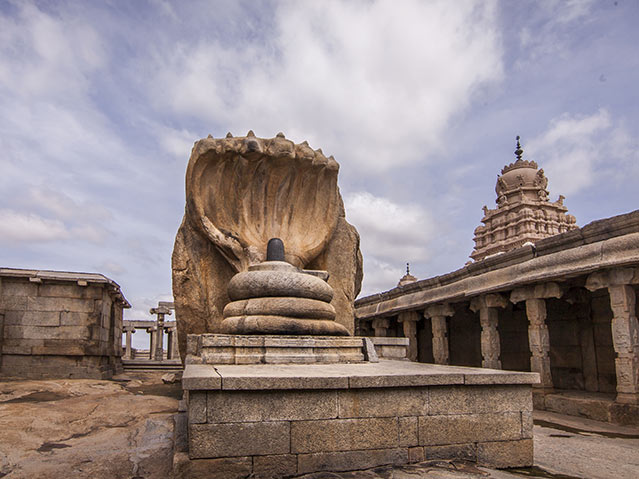 The origin of the temple dates back to the early 1500’s and was built by two brothers, Virupanna Nayaka and Viranna who served as Governors under the Vijayanagar Empire. This was during the reign of King Achutaraya at Penukonda, who financed the project. The temple also finds mention in the ancient Indian text, The Skanda Purana, as an important pilgrimage site of Lord Shiva .

Architecture of the Lepakshi Veerabhadra Temple

The temple is built in the Vijayanagara architechtural style and segregated into three parts, with an assembly hall, an ante chamber and a Sanctum Sanctorum. Two enclosures encircle the temple and the outer walled enclosure has three gates. A hall full of sculptures and paintings leads to the Sanctum Sanctorum. The painted images are all of celestial beings, saints, musicians and dancers, along with images of the 14 avatars of Shiva. The Sanctum is flanked by elaborately carved figurines of Ganga and Yamuna. Carved images of horses and soldiers adorn the exterior columns. The hall also features carved images of Natesha and Brahma, while the column at the southwest part of the hall features an image of Parvati. Many other paintings and carvings adorn the walls, columns and ceilings.

A life-size image of Lord Veerabhadra, wielding arms and decorated with skulls is installed in the Sanctum Sanctorum. The complex also houses a separate chamber located in the eastern wing which depicts carved images of Shiva and Parvati on a boulder. A huge boulder also depicts a carved image of a muilti-hooded serpent shielding a Lingam. An image of Lord Vishnu is also installed in a separate chamber.

The temple hosts a ten day festival every year during the month of February. This also includes the much awaited car festival. During this period, the temple is thronged by devotees who come for the blessings of the Lord and to take part in the proceedings.

Location – How to reach the Lepakshi Veerabhadra Temple

Built on the southern side of Lepakshi town on a block of granite rock in the shape of a tortoise, the temple is a huge tourist attraction. Several highways connect the shrine to the rest of the state and country. The temple is easily accessible by various modes of transport.

By Air: The nearest Airport is located in Puttaparthi, which is about 80 km away from Anantapur.

By Train: The Railway Station in Hindupur is about 12 km away.

By Bus: Lepakshi is well connected by bus service to neighboring cities and towns.