Introduction about the Kamakshi Amman Temple

The Kamakshi Amman temple is an ancient Hindu shrine dedicated to Goddess Kamakshi. It is located in Kanchipuram in the state of Tamil Nadu and is considered the temple city. The city lies at a distance of about 75 kms from Chennai and once served as the capital of the Pallavas. Kamakshi Amman is considered an incarnation of Goddess Parvati , the consort of Lord Shiva. The Goddess is portrayed as seated in an exalted yogic posture ‘Padmasana’, which resembles a lotus and signifies peace and prosperity. The temple is considered one of the Shakti Peethas in India and it is widely believed that this is the spot where the navel of Goddess Sati fell to the Earth. The temple is also associated with Adi Shankaracharya, the great saint and philosopher who sparked a revival of the Hindu faith in the 8th century. The shrine is a popular Hindu pilgrimage center and frequented by devotees from all over the world.

History of the Kamakshi Amman Temple 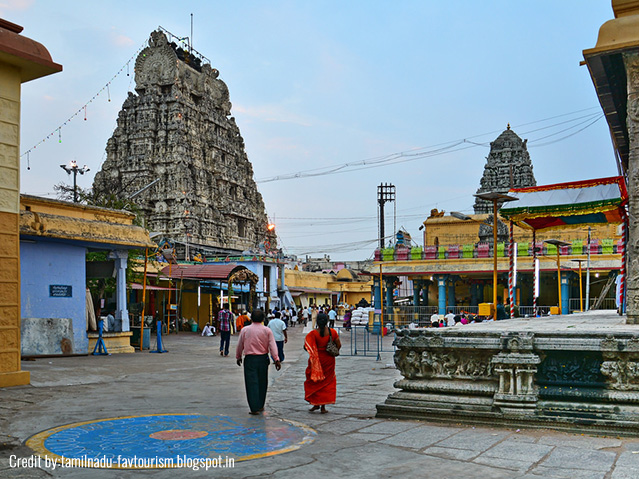 The Kamakshi Amman temple is one among three temples in India which are considered as Maha Shakthi Peethas, along with the Meenakshi Amman temple in Madurai and the Kasi Visalakshi temple. These ancient temples are the important centers of Goddess worship and believed to have been built by the Pallava kings.

The Goddess here is said to have prayed to a Shiva Lingam made of sand, under a mango tree in a bid to marry Lord Shiva . After severe penance and dedication, The Lord appeared before her and married Goddess Kamakshi, an Avatar of Goddess Parvati . There is no other shrine dedicated to Parvati in the city of Kanchipuram, making this a unique and one-of-a-kind place of worship.

Significance of the Kamakshi Amman Temple

A significant feature of this shrine is that the Goddess is worshipped in the form of a Chakra placed in front of the Idol, which was reportedly re-established by Adi Shankaracharya. An image of the Shankaracharya presides in the temple premises and there is also a temple tank located within the precincts. The statue of Lord Vishnu from the now decrepit Tirukalavanur Divya Desam, is also placed inside the Kamakshi Amman temple. There are also Idols of Lord Vishnu placed near the Temple tank and several other shrines dedicated to various Gods inside the premises.

The Goddess is situated in the middle of the temple premises, sporting a moon like structure on her forehead. She is often adored by several names and depicted with four hands corresponding to her endearing presence in the shrine.

There is also an Elephant shed within the premises and the everyday rituals start with Gau Puja and Gaja Puja , with the resident Elephants paying obeisance to the deity by trumpeting every morning at 5 A.M.

Architecture of the Kamakshi Amman Temple

The temple is constructed in the Dravidian style of architecture with an elaborate structural layout. The complex is spread over a sprawling expanse of 5 acres and has four entrances in all the four directions. The main tower housing the deity within the temple is covered in gold and can be viewed from the entrance.

There are also numerous Mandapams, one among them being the 100 pillared hall, which is elegantly built and reflects the craftsmanship of the artisans.

The daily rituals include four worship services offered to the deity and the annual festival is held in the Tamil month of Maasi. During this month, the chariot festival and float festival are held, along with a procession which winds its way through the city in a silver chariot. Fridays are considered auspicious, especially in the month of Adi, with special ceremonies being conducted on these days. Navratri , Sankara Jayanthi, Aadi, Aippasi Pooram and Vasanta Utsavam in Vaikasi are the other festivals celebrated with great fervor in the temple.

Benefits or Blessings of the primary deity- Kamakshi Amman Temple

Sri Kamatchi Devi is the epitome of goodness and blesses all those who worship her with a clean and pure heart. Devotees from all over the world offer prayers to her and she grants them their wishes. She is revered as the Goddess of fertility and grants childless couples with progeny. She is also famed for granting her devotees with fame and virtue, among many other things.

Location – How to reach the Kamakshi Amman Temple

Kanchipuram is a major tourist destination and well linked by taxis and buses from neighboring towns and cities of Tamilnadu.

By Air: The nearest Airport is located in Chennai city, approximately 75 kms away.

By Rail: Kanchipuram Railway Station is about 1 km away from the temple.

By Bus: The bus stand in Kanchipuram is 1 Km away from the temple.

Local Transport: Taxis, buses and three wheelers are available from the transit points and from various parts of the city to reach the temple.