Introduction about the Bull Temple

The Bull temple located in the area of Basavangudi, Bengaluru is dedicated to Lord Shiva’s Vahana (Vehicle) Nandi, the revered Bull. The Bull is in a seated posture and measures 4.5 meters in height and 6.5 meters in length, which makes it one among the largest Nandi Images in the world. It is made of a single chunk of Granite stone and has gradually blackened, due to worshippers applying charcoal and oil on its surface. The Bulls head is adorned with a small iron plate and flanked by the Idols of Lord Surya (Sun) and Lord Chandra (Moon), on their chariots. It is one of the few temples where the Vahana (Vehicle) is worshipped and gets priority over the master. Nandi is of great religious significance to the Hindu faith and many sects of Hindus revere the Bull as a deity by itself. The Giant Bull is revered as Basavanna and the entire area is named after the temple, signifying its importance. 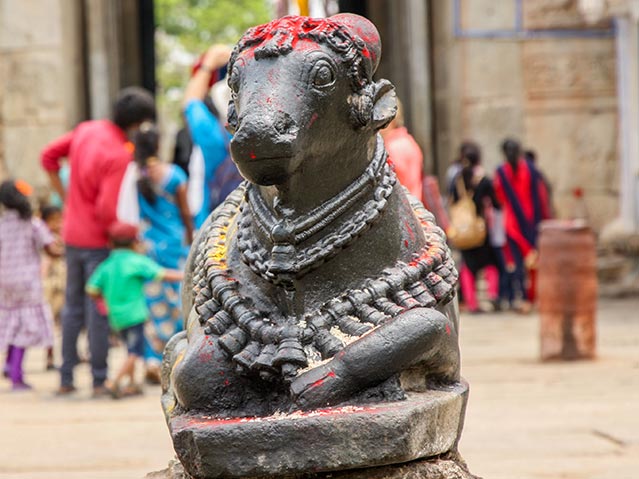 This famous Hindu temple is located inside a park called Bugle Rock which is reputedly millions of years old and there is also an image of the Elephant headed God, Ganesha, situated close by. The temple attracts visitors from around the Globe and is today a popular tourist destination.

History of the Bull Temple

The temple was built in the 16th century by Kempe Gowda of the Vijayanagara Empire, who is also credited with being the founder of Bengaluru city. The Vimana over the shrine which exists today was constructed in the early 20th century. It is adorned with Saivite figures and motifs which are strikingly beautiful and add to the charm of the shrine.

Legends associated with the Bull Temple

There is a popular legend surrounding the origin of the Bull temple. The area of Basavangudi was once a fertile farmland where groundnuts were cultivated. It is believed that a bull used to ravage the cropland and cause loss to the farmers. Ultimately, the farmers got together and built a temple to pacify the bull and placate it. Thus, the local populace started worshipping the bull and the temple gained prominence as a hallowed shrine.

Significance of the Bull Temple

A strikingly unique feature of this temple is that the Idol of the deity is made of 110 kgs of butter and never melts. It is distributed as Prasadam every 4 years among devotees and the Idol is continually covered with new layers of butter. It is also believed that the VIshva Bharti River originates at the feet of this statue and until a few decades ago, streams of water are said to have flowed from this holy shrine. The mythological and religious significance associated with this hallowed shrine makes it a renowned place of worship and attracts scores of visitors every year.

Architecture of the Bull Temple

The Bull temple is a small shrine, built in the Dravidian style of architecture and fronted by a porch in the Vijayanagara style. The South Indian artisans are famed for their creative skills and left their imprint on this sacred shrine. The exquisite Idol of Nandi is a masterpiece of craftsmanship and leaves one spellbound by its sheer beauty. The ambience in the temple is also serene and calm where people can experience peace and tranquility.

Festivals Related to the Bull Temple

The popular Bull Temple in Basavangudi is the venue for the famous 'Kadalekayi Parishe' (groundnut fair). Local farmers started offering it groundnuts after the temple was constructed and the practice has persisted till today. The fair is held every year during November –December with devotees and groundnut sellers from all over the state converging on the temple to witness and participate in the proceedings.

Benefits or Blessings of the primary deity- Bull Temple

Nandi, the Bull is the medium by which we can establish a rapport with Lord Shiva. Whispering our troubles and problems in the ear of Nandi is said to immediately grab the Lord’s attention and he grants us immediate relief. By touching the Image of the Bull and seeking its blessings, we are cleansed spiritually and mentally. The Bull of Shiva is revered and venerated by devotees from all over the world, with many visiting the temple just for a glimpse of the Idol and unburdening themselves of their hardships.

Location – How to reach the Bull Temple

By Air: Bengaluru is well connected to the rest of the country by air and the Bull Temple is approximately 37 kms away from the Airport.

By Train: The city Railway Station is about 6 kms away from the temple.

By Bus: Buses ply at regular intervals to and from the neighboring towns and cities as also the rest of India.

Local Transport: Taxis, local buses and three wheelers are easily available from any part of the city to take one to the Bull Temple.