The Badami cave temples are a series of unique rock cut temples located in Badami, a town in the north part of Karnataka. These exquisite temples represent Indian art and architecture at its finest and reflect the precision of Indian craftsmanship prevailing in those days. Numbering four in all, this complex of temples is dedicated to Hindu, Jain and even Buddhist deities with deep religious significance for all the faiths. Situated on the western banks of an artificial Lake, Badami is surrounded on the north and south by forts which were built over a period of time. The towering cliffs above the Lake are made of soft sandstone and many shrines were sculpted out of the soft rock, which overlook the former capital city. Acclaimed by UNESCO as a shining example of Indian temple architecture, Badami is credited with the distinction of having inspired the characteristics of Hindu temples built elsewhere in the Indian subcontinent. 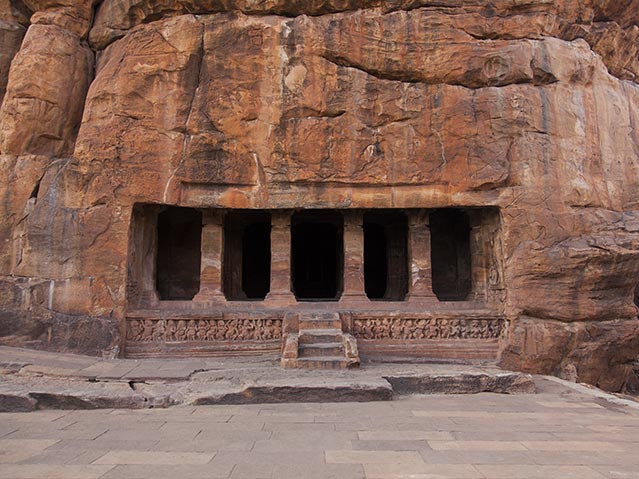 Previously known as Vataapi, Badami was the capital of the early Chalukya dynasty which held sway over most of Karnataka from the 6th to the 8th century. The inscriptions found in the temple complex indicate the origins dating back to as early as the beginning of the 6th century. The Cave temples have withstood the vagaries of time and are still well preserved, which speak volumes about the precision and architecture of those times.

Several inscriptions are found in Kannada and Sanskrit which date back to as early as 542 A. D, and one of the most important one is believed to date back to 700 A. D. Some of these have still not been deciphered, but there is a beautiful carving of a ten leaf lotus in a circle. The four Cave temples are dedicated to various Indian deities and there also exists a fifth cave which is revered as a Buddhist temple. The first cave abounds with carving of Lord Shiva along with a frieze of his attendants, the Ganas. The ceiling is replete with murals of couples depicted in amorous positions which are still remarkably preserved in spite of the passage of time. There is an exquisitely carved relief of Shiva and Parvati along with several others, with an 18 armed Nataraja taking prominence over the others.

The second cave is dedicated to Lord Vishnu , portrayed as Trivikarma depicted in his Divine Avatar standing with one foot on Earth and the other directed northward. Vishnu is also represented here as Varaha (Boar) and Krishna Avatars.

Cave three is by far the largest among the lot with inscriptions etched all over the interiors. The ceilings of this humongous cave abound with magnificent paintings and a brilliant mural of Lord Brahma seated on a swan. On the floor below, is a Lotus medallion where offerings are laid. Several reliefs of Lord Vishnu depicted in various positions also proliferate in this huge cave.

The fourth cave is located higher than the other caves and dedicated to the Jain faith. The cave contains an elaborate carving of Thirthankara Parshavnatha with a serpent at his feet. It also contains a sculpture of the Jain Saint Mahavira in a seated pose and a standing Gomatesvara depicted in a serene posture with creepers twisted around his legs.

The elegant cave Shrines feature a museum with an extensive collection of local sculptures and other artifacts. Lord Shiva’s bull Nandi, stands guard at the entrance and entrances visitors with its majestic presence. The remarkable Lajja-Gauri images pertaining to the fertility cult which flourished in that time are also displayed here.

The Badami caves are built in the Nagara and Dravidian styles, which were prevalently adopted by the Chalukyas. These caves are considered a masterpiece of Rock cut architecture with Petroglyphs and rock art which date back to the early 6th century, featuring in the cave complex. These man-made structures are carved out of soft sandstone on the precipice of a hill. Several stone columns and brackets support the structures which lend a distinctive touch to these marvels of human workmanship. The caves are linked to each other by a stepped pathway with terraces overlooking the town and lake.

Badami and the neighboring towns host several annual festivals which are celebrated with great fanfare. The region is famous for the annual temple festival held at Banashankari, in January-February and attracts a large number of visitors. The region is also famous for the Virupaksha Temple car Festival and Mallikarjuna Temple festival held in Pattadakal during March-April.

Benefits or Blessings of the primary deity- Badami Cave Temples

The Badami cave temples are frequented by Hindus, Jains, Buddhists and people of other faiths. All the three Gods in the holy trinity of Hinduism are represented here and visitors can seek the blessings of all the three celestial beings. People of the Jain faith also frequent the temples to pray to the Tirthankara and Mahavira.

The Badami Cave temples are easily accessible mainly by road and located about 84 kilometers of Hubli.

By Flight: The nearest Airport is located at Hubli which is about 84 kilometres to Badami. Sambre Airport located in Belgaum is about 123 kilometres away.

By Rail: Badami is well linked by rail to all major cities of the country.

By Bus: There are regular buses plying from major cities of the country to Badami.