Varadaraja Perumal Temple is dedicated to Lord Vishnu, which is located in the city of Kanchipuram near Chennai. It is fourth among the 108 Divya Desams of Lord Vishnu. Many Alwars and saints have praised this temple, and Saint Ramanuja, the Vaishnava Visisht Advaita philosopher and an ardent devotee of Lord Vishnu, had lived and continued his services in this temple. 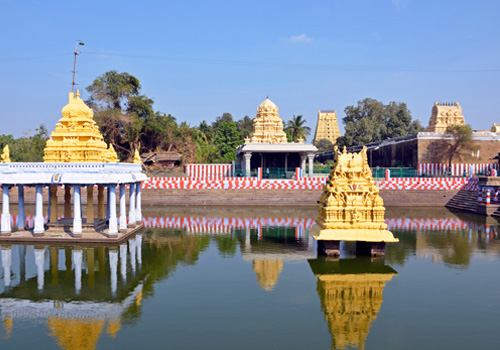 This is the shrine where Lord Brahma got his boon by praying to Lord Vishnu, as he was highly pleased with his meditation and piety. Lord Brahma highly praised Lord Vishnu and revered him as Varadaraja Perumal. The place got its name Athigiri, as Airavadam, a divine elephant and vehicle of Indra, lifted Lord Vishnu in this temple. This temple has 24 steps, which represent the number of letters in the Gayatri mantra.

Once, the two sons of Sage Bhringi were under the tutelage of Sage Gautama. They did not notice that two lizards had fallen into the water. Sage Gautama cursed them when he saw the lizards in the vessel of water, which was kept for prayer and cursed them to become lizards. Sage Bhringi pleaded to Sage Gautama to give them relief from the curse. The sage said that they could get salvation if they prayed to Lord Vishnu in Kanchipuram for mercy. As Lord Vishnu is very merciful, he granted that their souls would reach heaven, but their bodies would remain as lizards. Lord Vishnu also said that anyone who worships the lizards would get relief from all adverse effects of Karma.

Once, Lord Brahma conducted a special Yajna, a highly sacred ritual at Kanchipuram, to purify Himself. He invited his consorts, Goddess Gayatri and Goddess Savitri, but ignored Goddess Saraswati. Goddess Saraswati was highly disappointed and flowed in spate as River Vegavati. Lord Brahma, pleaded with Lord Perumal to help him. Upon the request of Lord Brahma, he placed himself across the river in the reclining posture. Once the Yajna was completed, Lord Vishnu appeared as Perumal from the sacred fire.

This temple has various inscriptions from the Chera, Chola, and Pandya periods. It is also believed that this temple was built during the reign of the Pallavas. The temple is filled with stucco images and intricate carvings on the walls of the temples. The statue of Athi Varadhar Perumal is 40 feet and is in a reclining posture. This is made of Athi (fig tree) wood, which was set for prayers 40 years ago for the darshan of devotees. The statue of Chakkarathazhwar, also known as Sudharsana Azhwar, is depicted with 16 hands holding a conch and a discus. There are two long halls, which have 100 pillars and offer a wonderful view of the spectators.

This temple attracts a lot of people across the globe who visit it to partake in its celebrations. Among the festivals, Brahmotsavam, Navratri, and Vaikunta Ekadasi, which are celebrated during December and January, are highly important. Other important festivals like Deepavali, Rama Navami, Krishna Jayanthi are also celebrated here with a lot of pomp and grandeur.

Lord Vishnu grants a lot of boons for His devotees. He helps them to achieve excellence in education and blesses the family. He also bestows a lot of prosperity. Lord Sudarshana Azhwar removes the obstacles in wedding proposals and blesses with wedlock. People also worship in this temple to succeed in court cases and gain mental peace. Goddess Perundevi Thayar blesses her devotees with progeny for the couples praying to have a child. The worship of gold and silver-plated lizard idols brings relief to those who suffer from unfortunate incidents due to the fall of real lizards on their body.

How to reach Varadarajaswamy Temple, Kanchipuram

Kanchipuram Railway station is located very close to this temple.

The town of Kanchipuram is well connected to most of the cities. Local transport is available in plenty.