Introduction about the Kashi Vishwanath Temple

The Kashi Vishwanath Temple is a sacred Hindu shrine in Varanasi in the state of Uttar Pradesh, India. The presiding deity is Lord Shiva, one of the three Gods in the holy trinity of Hinduism, along with Vishnu and Lord Brahma. Located on the Western banks of the River Ganga, the temple is considered one of the 12 Jyothirlingas in India. The deity is popularly known as Vishwanatha or Vishweshwara indicating his status as the Ruler of the Universe. The shrine is also known as the Golden Temple since its domes are covered with pure gold. The temple premises also houses several small shrines dedicated to Kaalbhairav, Avimukteshwara, Lord Vishnu, Vinayaka and Virupaksh Gauri. The ancient city of Varanasi is home to several temples and also called Kashi, which explains why this temple is known as Kashi Vishwanath Temple. The temple is a popular Hindu pilgrimage center which attracts innumerable devotees and visitors from all over India and the world. 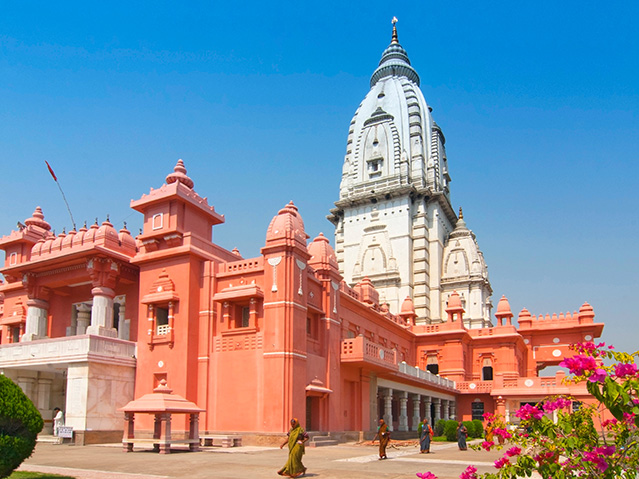 History of the Kashi Vishwanath Temple

The origins of the temple can be traced back to the Vedic period and it finds mention in holy Indian texts, including a section of the Skanda Purana. Ancient Hindu scriptures refer to it as an important place of worship for followers of Shaivite philosophy. Since the temple is in the holy city of Kashi from ancient times, it is known as the abode of Lord Shiva.

The original temple was ransacked and plundered by the army of Qutb-ud-din Aibak in 1194 and later rebuilt by a Gujarati merchant sometime in the 13th century. It was again demolished in the 15th century by Muslim rulers who were intolerant of the Hindu religion. It was rebuilt by Raja Man Singh during Emperor Akbar’s reign and further renovated by Raja Todar Mal in 1585. The orthodox Mughal Emperor Aurangzeb destroyed the temple and built the Gyanvapi Mosque in its place. Maharani Ahilya Bai Holkar of Malwa is believed to have built the current structure on an adjacent site in 1780. Several noble families made significant contributions to the temple including the Bhosales of Nagpur who donated silver to the temple and Maharaja Ranjit Singh who donated one tonne of gold for plating the temple’s dome.

A hereditary group of Pandas ran the temple’s affairs for several years, but from 28th January 1983, the management is under the aegis of the UP Government.

Significance of the Kashi Vishwanath Temple

The Jyotirlinga in the Kashi Vishwanath temple has special relevance for followers of the Hindu religion and many great Hindu saints like Adi Sankaracharya, Goswami Tulsidas, Ramakrishna Paramhansa, Swami Dayananda Saraswati, Swami Vivekananda, Gurunanak etc; had visited Varanasi to take a dip in the holy water of the Ganga and get Darshan of the Jyotirlinga. Many believe that having a bath in the holy water of the Ganga cleanses all sins and frees one from the cycle of birth and death. People who breathe their last in the holy city of Kashi are believed to go straight to Shiva’s abode, with the Lord Himself coming to whisper the holy mantra of salvation into the ears of the dying.

Architecture of the Kashi Vishwanath Temple

The kashi Vishwanath temple is symbolic of the ancient Indian style of architecture and this design is emulated by many similar shrines across India. The Lingam enshrined in the Sanctum is 60 cm tall and 90 cm in circumference. The shrine follows a quadrangular shape and surrounded by shrines of various other Hindu Gods. There is also a small water-well within the premises which is called the wisdom well. A congregation hall leads to the Garbagriha or Sanctum Sanctorum where the black colored Linga is placed on a silver platform. The magnum opus of the temple is the domes covered in pure gold, which literally enthralls visitors with their splendor.

Several festivals are celebrated with great fanfare in the temple especially those within the Shaivite ambit, starting with the 5 Aartis performed every day to felicitate the Lord. The occasion of Maha Shivaratri is a major festival and celebrated with great enthusiasm and fervor. People flock from all over the country and the world to participate in the festivities and the temple witnesses huge crowds during these times.

Benefits or Blessings of the primary deity- Kashi Vishwanath Temple

Lord Shiva is endowed with innumerable auspicious attributes and people who worship him are granted their desires. Women turn out in droves to pray for the well-being of their husbands and family, while unmarried maidens pray for a life partner with similar attributes as the Lord. Devotees pray for peace, success and happiness in their lives, imploring the Lord to grant them ‘Moksha’ or liberation from the cycle of birth and death.

Location – How to reach the Kashi Vishwanath Temple

Varanasi is an ancient Indian temple city and has a rich spiritual and religious legacy. The Kashi Vishwanath Temple can be accessed by an auto rickshaw or taxi from any part of the city.

By Air: Varanasi Airport is located at a distance of about 6 kms.

By Train: Varanasi Railway Station is about 4 kms away from the temple.

By Bus: Several buses ply to and from Varanasi to neighboring states and cities.