Introduction about the Pashupatinath Temple

The famous Pashupatinath Temple is located on the banks of the Bagmati River just five kilometers east of a Valley in Kathmandu, the capital of Nepal. The shrine is dedicated to Lord Pashupathinath (Shiva) and considered one of the most sacred temples of the Hindu faith. The complex is spread out on a vast expanse of land and contains several temples, ashrams and other related structures. 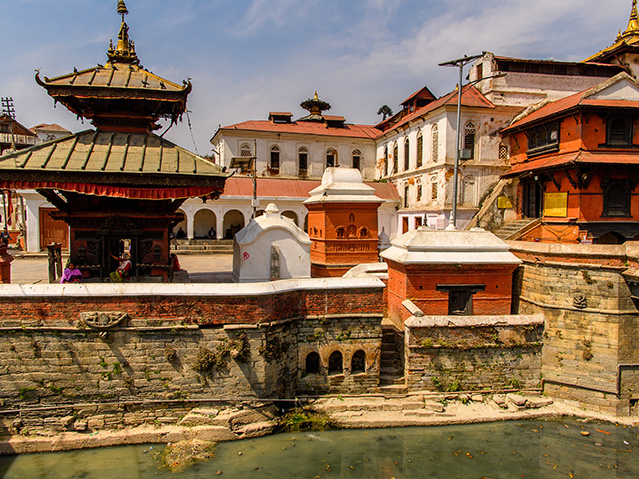 It features numerous images and inscriptions excavated over the years along the banks of the Bagmati River. This magnificent temple is designated a UNESCO World Heritage Site since 1979. It features as one of the seven Monument groups in UNESCO’s list of cultural heritage sites in Kathmandu. The temple is a sacred Jyotirlinga of Shiva, along with the 12 Jyotirlingas in India which are considered the body and this one in Kathmandu as the head of the body. It is also regarded as one of the 275 Tamil Paadal Petra Sthalams (abodes of Shiva) on the sub-continent.

History of the Pashupatinath Temple

This ancient temple was re-erected in the 15th century after the old structure was infested by termites and fell into a decrepit state. The Lichhavi king Shupuspa is credited with initiating the construction of the new structure. Several more temples were erected around this two-storied temple over a period of time, with many still standing today. The Vaishnav temple complex with an image of Lord Rama dates back to the 14th century and also the Guhyeshwari Temple which is mentioned in old texts.

Legend of the Pashupatinath Temple

Though the origins of the Pashupatinath temple are shrouded in mystery, it is undoubtedly the oldest Hindu temple in Kathmandu. Several ancient Nepali texts suggest that the deity gained prominence as Pashupati, the Lord of all animate and inanimate beings. Many legends abound about the origin and existence of this magnificent temple of Lord Pashupatinath and the origin of the temple can be traced back to as early as 400 B.C.

Significance of the Pashupatinath Temple

This vast temple complex encompasses a staggering land area of over 264 hectares. Not less than 518 temples and monuments exist within its premises and the main Pagoda style shrine lies in a fortified courtyard guarded by elite forces of the Nepali Police and Army. A huge image of Nandi the Bull in bronze welcomes visitors at the western entrance. Several prominent shrines of Vaishnav and Shaiva tradition are located within the complex.

The outer courtyard houses shrines dedicated to Lord Rama, The Virat Swaroop temple, the 12 Jyotirlinga and Pandra Shivalaya temple and the Guhyeshwari temple.

Some of the religious rituals conducted in the Pashupatinath temple are unusual and sometimes may even be shocking for Westerners; the most unusual would be the odor of cremated bodies wafting through the air. Though not uncommon in Indian culture, it is not in keeping with Western tradition.

Followers of the Hindu faith believe that those who die in the hallowed precincts of the Pashupatinath temple are reborn as humans; irrespective of the bad Karma they may have accumulated during their current existence on the planet.

Architecture of the Pashupatinath Temple

The Nepalese pagoda type of architecture is evident in the construction of the main temple and displays all the traits associated with this style. The wooden rafters of the shrine are exquisitely carved and the two level roofs are of copper with gold covering. Resting on a square base platform, the temple has four main doors covered with silver sheets. The gold pinnacle of the temple is a well-executed piece of work. The inner Garba Griha (Sanctum Sanctorum) houses the idol of the Lord and the outer Sanctum forms an open corridor. The idol installed here is a stone Mukhalinga on a silver yoni base, with a silver serpent wound around it. The four faces of the Lingam facing four directions represent Lord Shiva in various aspects. All the images are depicted holding a Rudraksha Mala in the right hand and a Kamandalu in the other. The Shiva Lingam is always attired in a golden vastra except during the Abhishekam ceremony.

The temple celebrated several festivals every year, with the most prominent being Maha Shivaratri

Location – How to reach the Pashupatinath Temple

The Pashupatinath temple is located in the beautiful city of Kathmandu in Nepal and easily accessible by various modes of transport. Indian citizens need to have a valid Passport to enter Nepal.

By Air:The Airport in Kathmandu is a little more than 2 km.

By Train: The Gorakhpur Railway Station in India is around 221 km away.

Taxis and buses are available to take one to the Pashupatinath temple.