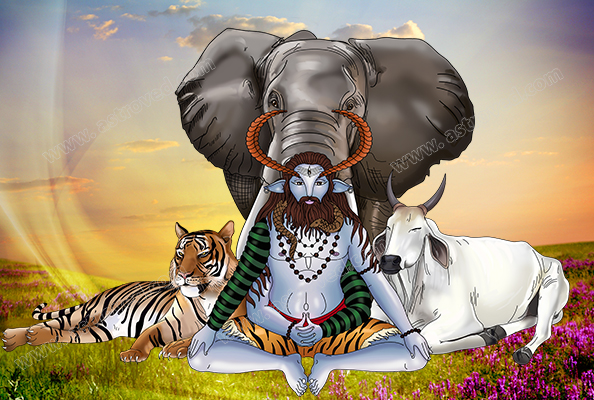 Pashupati is an aspect of Lord Shiva, one of the supreme trinities and the God of destruction. The term ‘Pashu’ means ‘animal’ and can also refer to ‘any being’. ‘Pati’ is ‘the Lord’ or ‘the Protector’. The name Pashupati is said to have been conferred on Shiva, by Vishnu, the God of protection, as Shiva was given the position of the Lord of the demons.

Pashupati is a God, who symbolizes many profound aspects of five each. He has five heads, which represent the five important incarnations of Shiva, which are Sadyojatha, Vamadeva, Tatpurusha, Aghora and Ishana. The five faces also look in five directions, in the four cardinal directions and at the zenith. The first of the five Avatars, Sadyojatha signifies Brahman or the universe, and hence denotes one of the five elements, the Earth; Vamadeva, the second signifies Lord Vishnu and denotes the element water; Tatpurusha denotes the sages and the element air; Aghora is linked to Rudra and the element fire; and Ishana is associated with all that exists in nature and the element space.

Pashupati is not merely the Lord of animals. Even the human beings who are governed by anger, pride, jealousy, ego, avarice and ignorance are no superior to animals, and hence, it is believed that praying to Lord Pashupati can help people to overcome such vices and shortcomings.

Once, there lived three demons, Viryavana, Tarakaksha and Vidyunmali, who became powerful, by performing penances and getting boons. They started killing sages, slaughtering people, harassing the Godly beings and thus, destroying the very universe. It was not easy to challenge them, as they used to go and hide in their three illusory cities, known together as Tripura. These were none other than the cities of prosperity, power and dominance. Helpless, the Gods approached Lord Shiva for relief. The Lord took pity on them, took on the mighty demons, killed them ultimately and put an end to their atrocities. As a result, Shiva is said to have got the name Pashupati as a title, as the Lord of the beings.

Mahabharata epic also narrates the story about Pasupathastra, that is, the Astra or weapon of Pashupati. Arjuna did severe penance towards Lord Shiva seeking this weapon from him and the Lord, pleased with his devotion, granted him the immensely powerful weapon after testing Arjuna’s valor all by himself in a direct combat.

While Lord Shiva is worshipped in all of his many aspects, the greatest temple for Pashupati is located in the neighboring country of Nepal. Lying on the banks of River Bagmathi in the capital of Kathmandu, the ancient Pashupati Nath temple is regarded as one of the holiest places in Nepal and is visited by thousands of pilgrims, especially on the sacred Shivaratri day. It is believed that the Lord visited Nepal as a deer, and was so impressed by the natural beauty of Katmandu valley that he stayed there forever. Pashupati Nath is also regarded unofficially as the national deity of Nepal. A famous temple for him also exists in Mandsaur, Madhya Pradesh in India. Pashupati worship is believed to liberate people from all sins and lead them to the path of salvation.

Pashupati is revered in a grand festival at Pashupati Nath temple in Nepal, which attracts thousands of devotees from around the world.