Introduction about the Kamakhya temple- the Goddess of Desire

The Kamakhya temple is dedicated to the Goddess of desire Sati (Lord Shiva’s consort) in the form of Goddess Kamakhya. It consists of several individual temples with ten Mahavidyas as the Deities. This temple venerates the Goddess as the source of creation and serves as a symbol of fertility, sexual desire and related bodily functions. The Goddess is worshipped as Yoni in Kamakhya form, which implies her importance as the Goddess from whom all living beings emanate. The temple is an important pilgrimage destination for Hindus, especially for Tantric worship. 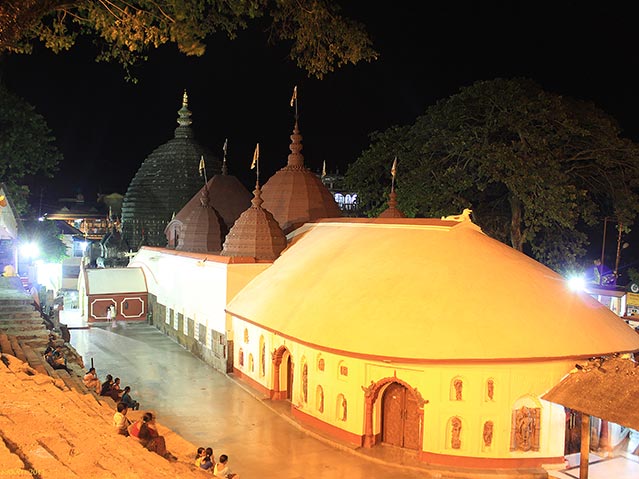 The temple was reportedly constructed in the 9th century during the Mlechchha dynasty and took its place as a center for Tantrik sacrifice, mysticism and sorcery. This temple has survived the vagaries of time and several invasions, but has always managed to hold its relevance as an important place of religious worship for Hindus. The temple reconstruction was completed in 1565 and further developed during the reign of the Ahom dynasty.

The kamakhya temple is regarded as one of the 108 Shakti Peeths which tells the story of Sati, the consort of Lord Shiva. When her father Daksha organized a yagna, he deliberately rebuked Shiva as an ascetic and one unworthy of his daughter. Sati took this a personal affront and jumped into the sacrificial fire, taking her own life. Shiva was enraged and placing Sati’s body on his shoulders, he commenced the Tandav or divine dance of destruction. To stop Shiva from destroying the Universe and creation, Lord Vishnu severed the dead body into 108 pieces with his discus and the places where these pieces fell are called Shakti Peeths.

The Kamakhya temple is a tribute to the source of creation itself and everything associated with it relates to sexuality, fertility and the very origin of all living beings. It celebrates Goddess Sati’s desire to win over her husband Shiva, and lead a life of conjugal bliss. The temple is revered for its deity Kamakhya Devi who is fondly called the bleeding Goddess. The sexual organs of Shakti are supposedly installed in the sanctum sanctorum and worshipped by devotees, signifying the essence of creation. It symbolizes the power of a woman’s capability to procreate and give birth to new life.

This temple, which has been renovated several times, is built in the Nilachal type: a temple with a hemispherical dome and a cruciform base. It consists of 4 chambers and three mandapas aligned from east to west. Panels with sculptures of several Gods and Goddesses are a prominent feature of the structure and are exquisitely designed to complement the main facet of the temple. The Garbhagriha, or inner sanctum features a rock aperture in the shape of a Yoni and rests below the ground level. Stone steps lead to this unique hollow which is constantly filled with water replenished by a perennial underground spring. This stone feature is worshipped as the Goddess Kamakhya and signifies the victory of life prevailing under all circumstances.

Widely celebrated as a center for Tantrik worship, this temple is frequented by devotees from the length and breadth of the country. Most famous festivals include the annual Ambubachi Mela and the Manasha Puja.It is also famous for the annual Durga Puja during Navratri in the autumn which attracts thousands of visitors.

Devotees flock to the Kamakhya temple to receive the Kamiya sindoor which is found once a year in the month of June. This sindoor is in rock solid form and is much sought after for its miraculous properties which bring the blessings of the Goddess to you. It has the propensity to resolve all problems we encounter in our lives and bestow us with all that we desire. It is said to attract wealth and material comforts and helps us prosper professionally in our career or business. It also helps us reconcile with lost love and rekindles the passion and romance in our life.

Location – How to reach Kamakhya temple

The Kamakhya temple is located in the Eastern state of Assam in India and situated on the Nilachal Hill in the western part of Guwahati. The temple is located 8 km from the railway station and 16 kilometers from the Airport. It is easily accessible by taxis, local buses and autorickshaws.

By Flight: Guwahati is well connected by regular flights to most major cities. Lokpriya Gopinath Bordoloi Airport is the major Airport in all of North East India and you can book a taxi/cab or board a bus to get to the city centre or to your hotel.

By Rail: Guwahati railway station is well linked by rail to all major cities of the country with trains plying frequently at regular intervals.

By Bus: Guwahati is very well connected with adjoining cities and states by regular bus services.