Chevvai or Mars is a warrior planet. Also known as Mangal or Kuja, he is considered the commander among planets. Vedic Astrology regards Chevvai as an important member of the Nava Grahas, the nine planets that strongly impact the lives of the people and holds that the study of his position and movements, along with that of the other planets can reveal the past, present and the future of any individual.

Chevvai is a high energy planet, whose colour is red and direction, south. He represents aspects like courage, aggression, armed forces, police, administrators, enemies, weapons, engineering and metals. He is called Bhatra Karaka and also as Bhoomi Karaka, as he represents the brother and the landed property respectively. Chevvai takes about 45 days for travelling through a sign and hence, about 18 months for completing a round of the zodiac.

Mars when well-placed can give strength and energy. However, an afflicted Mars can make a person restless and short tempered, and face accidents and injuries.

This sloka is in praise of Subrahmanya or Karthikeya, who is regarded as the Lord of Chevvai Graha. Chanting of this powerful hymn with faith can be very effective in mitigating Chevvai afflictions.

This divine Hymn describes about Lord Muruga (Subramanya) who is the youngest son of Lord Shiva and Goddess Parvati.

He has reddish bright complexion like vermillion. His face is like the Moon. His body is so bright and delightful with Ornaments. He gives comfort to Heaven itself. He has four hands have the Lotus, Abhayam, (first divine quality or fearlessness) Shakthi, (Vel) and Cock (rooster). He has applied Sandal and wears red color garments. I Bow to Lord Subramanya (Muruga) who relieves the fear of his devotees. 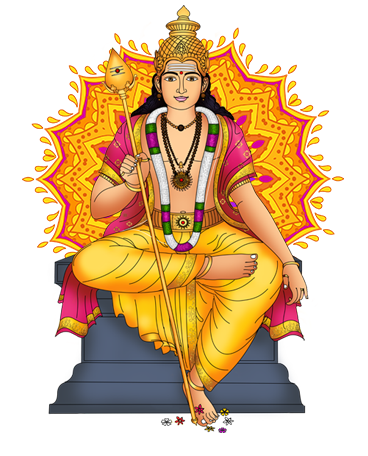 Propitiate Lord Subramanya (Muruga) by worshipping him with red oleander flowers on Tuesdays. This can greatly help to bring about good results.

The sacred scriptures prescribe fire ceremony, Abishekam (hydration ceremony), Pooja/Archana (Light and Sound ceremony), Yantra and Mantras (special sounds) as the ways to offer your prayer to the divine. Out of these, fire ceremony is the most evolved spiritual technology on earth to connect with the divine beings. Participate in the remedial services to clear your karma and receive the blessings.

Muruga Pooja is dedicated to Lord Muruga, the son of Lord Shiva and the God of victory. The purpose of this pooja is to achieve success in all litigation issues and to attain a problem free life!

To get rid of litigation and other legal issues, pray to Lord Muruga/ Subramanya. This powerful Archetype also helps to overcome debts, diseases and problems from enemies.