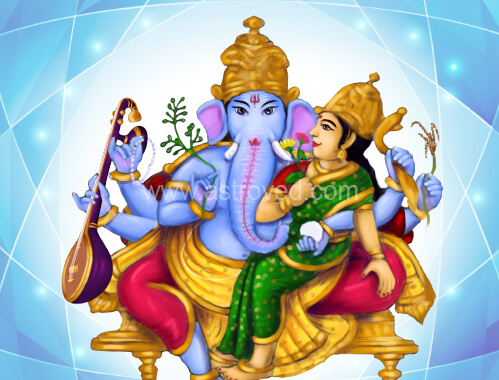 Ucchista Ganapati is regarded as the 8th among the 32 different forms of Ganapati. The Sanskrit word ‘Ucchista’ literally means the remains and leftovers, but in this context, carries a Tantric connotation. Ucchista Ganapati is considered a tantric aspect of Lord Ganesha and denotes the blessed offerings. Ucchista Ganapati is blue in complexion, is in a sitting posture and is depicted with his consort Goddess Shakti Devi seated comfortably on his left lap. He has six hands, the main left of which gently embraces his consort, and the rest of his hands hold in them, a japa mala of Rudraksha beads, a pomegranate fruit, fresh sprig of paddy, blue lotus and the stringed instrument Veena. The end of his trunk rests on the thigh of the Goddess.

He can be seen as a sculpture in the Maha Ganapati temple in the Kerala capital Thiruvananthapuram and some temples in Mysore region in Karnataka, where all the 32 Ganapati forms are on display. Ucchista Ganapati can also be worshipped in an idol form, in the famous Rockfort Ucchi Pillayar hill temple, Thiruchirappalli in Tamil Nadu.

Karthigai Star, also known as Krittika Nakshatra is said to be related to Ucchista Ganapati.

Ucchista Ganapati is considered a superior aspect of Lord Ganesha. It is firmly believed by his devotees that worshipping this Lord shall help gain his abundant blessings and bestow with success in endeavors, advancement in career, betterment in life and a predominant position in society.

Meaning: ‘The one, who devours the remnants of food,’ describes his form and prays for his grace and blessings.

Chanting the Ucchista Ganapati mantra with faith can be an effective means of propitiating this powerful Lord.