The Sun is an important celestial object and an inexhaustible powerhouse, from which all the living beings draw their energy. It is the main reason for the existence of all living beings and is necessary for the sustenance of all life. Surya is also referred to as the Sun God. His other names are Aditya, Pushan and Ravi. Surya (Sun god) is depicted with a crown and he rides a chariot fitted with seven horses, where each horse represents a day in a week. Not only in Hinduism, but his presence is also there in Buddhism and Jainism. He is also worshipped as Helios in Greece, Mitra in Rome and Ra in Egypt. Surya (Sun god) is one of the nine celestial planets or the Navagraha, according to the Hindu pantheon. 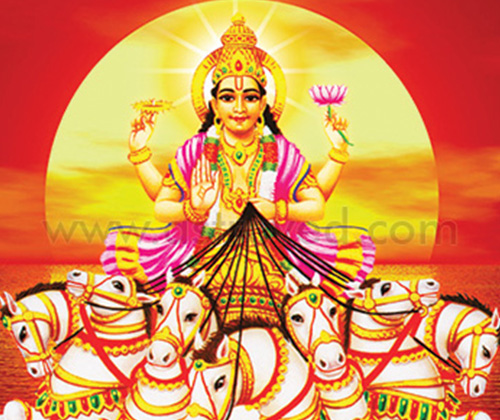 Surya (Sun god) is the son of Sage Kasyapa and Aditi. There are references which say that he is the son of Lord brahma . Surya has three wives, namely, Sanjna, Ragyi, and Prabha. Goddess Sanjna was the mother of Vaivasvata Manu, the seventh of the Manus, and the twins, Lord Yama , who is the Lord of Death and his sister, Yami. Sanjna also has a twin, Ashwini Kumaras, who are depicted as horsemen and physicians to the Devas. As Goddess Sanjna was unable to bear the heat of Lord Surya, she created her identical shadow called Chaya. Goddess Chaya has two sons named Savarni Manu, who is the eighth among the Manus and Shani, the planet Saturn. She also has two daughters, named Tapti and Vishti. Surya (Sun god) has two more sons named Revanta (through Goddess Ragy), and Prabhata (through Goddess Prabha).

Surya (Sun god) is also the father of Karna who was the stepbrother of the Pandavas. He is depicted in the Mahabharata as a son born to princess Kunthi who later marries King Pandu. There are various reference to Surya in the ancient Puranas and Vedas. In the Ramayana, Sage Agastya asks Lord Rama to meditate on Lord Surya, and chant the powerful mantra “Aditya Hridayam”.

It is a harvest festival celebrated in the southern part of India, especially in Tamil Nadu. Farmers thank the Sun God for his benevolence in giving them a good harvest and pay their tribute. People worship him to show their gratitude, as Lord Surya is the prime source of energy.

Samba Dasami is celebrated in Orissa to honor King Samba, who was the son of Lord Krishna. He was cured by Lord Surya when he meditated on him.

Ratha Saptami or Surya Jayanthi is celebrated on the seventh day of Saptami, which is the bright half of the Hindu month, Magha (February-March). This is the day to praise Lord Surya for his grace.

1.The Dakshinaarka temple at Gaya, Bihar

This is a magnificent Temple, dedicated to Surya. This was built during the 13th century, by the King Prataparudra of Warangal in Andhra Pradesh.

This is one of the powerful temples of Surya (Sun god), which was patronized by Peshwa rulers. Many people believe that it can cure them of diseases like leprosy, blindness and other skin diseases.

This was built during the 13th century, by King Prataparudra of Warangal. The deity of Surya (Sun god) is depicted with a coat and boots in Iranian tradition. There are carvings in the temple which depict Hindu Gods like Lord Shiva, Goddess Parvati and Lord Vishnu.

This temple has a circular stone tablet, with 12 images of Surya (Sun god) in a circle along with his father, King Kashyapa. This is believed to be built during the 8th century.

This temple is built in Dravidian style by Chola kings. This temple is more than 1200 years old. Lord Shiva is the main deity and is revered as Kashi Vishvanathar. The temple also has a separate shrine for Goddess Parvati, revered as Goddess Visalakshi in this temple.

This temple is built during the 7th Century by a Kalinga king. The statue of the Lord is made of granite and is five feet tall. There is a huge temple tank and the entire temple is constructed very beautifully.

7.The Sun Temple at Modhera, Gujarat

This was built in the year 1026 and was designed to receive the Sun’s rays directly on the statue. There are intricate carvings and the entire temple is designed very beautifully.

8.The Sun Temple at Konarak, Orissa

This is built in the Pagoda-style architecture and was built during the 13th century. The entire temple is constructed like a chariot, pulled by seven horses. The temple was destroyed by the Portuguese invaders, and now only the Sabhamandap and the Natamandir is remaining.

Sunday is regarded as the important day to worship Surya (Sun god). People with malefic Sun’s position in their natal charts are advised to wear rubies. Since Surya is the god of inexhaustible power, people worship him for his grace to grant them guidance in their life. Many farmers also worship him to gain his grace for good harvests.

Participate in Surya Pooja to bring success in personal and professional lives.

Participate in Surya Fire lab to enhance your sense of duty, discipline and responsibility.

Keep Surya yantra with you to get relief from depression, despair and mental confusion.