Lord Kubera or Dhanpati as he is sometimes referred as, is the God of wealth. Kubera is the custodian of material wealth and entrusted with the task of distributing the riches, while creating wealth is the sole domain of the Goddess Lakshmi. Kubera is also the king of the Yakshas (guardians of Earth). Though he is frequently referred to, in Hindu texts, he does not play a very significant role as a deity. He is widely revered in Jainism, Buddhism and Hinduism, with all three religions acknowledging him as the God of wealth.

Kubera presides in the high regions of the Himalayan Mountain range and considered the guardian of the North. He is also entrusted with safeguarding all of the Earth’s treasures, which include Gold, Silver, Pearls, Jewels, Precious stones and Nine ‘Nidhis’ (special treasures). 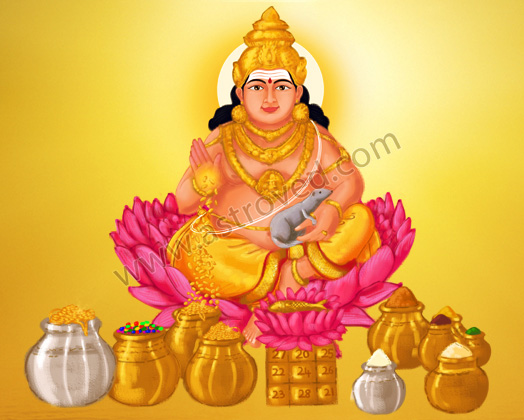 How is Kubera Depicted

Kubera is portrayed as a dwarf with three legs, white skin and only eight teeth. He is depicted as slightly deformed and Lord Brahma requested the holy sage Viswamitra to build a chariot for Kubera, so that he may move around freely. The sage designed and built a large flying chariot called ‘Pushpak’ which could move of its own accord. This allowed Kubera to fly around and rain precious items and jewels to people on the ground to help them overcome poverty.

Kubera’s status as a God

Kubera achieved the status of a God due to performing severe austerities for thousands of years and was duly rewarded by Lord Brahma, who recognized his efforts.

It is also said that it was due to Lord Shiva’s benevolence that Kubera was elevated to the status of a God. The perseverance and efforts of Kubera won Shiva’s admiration and he rewarded him for his tenacity.

Ravana, Kumbhakaran and Vibhishana are Kubera’s half-brothers and all three figured prominently in the Hindu epic ‘Ramayana’. Ravana is said to have stolen Kubera’s chariot Pushpak and misused it for his own selfish interests by abducting Sita and carrying her off to Lanka. Rama attacked Lanka to win back his wife and with great determination managed to thwart Ravana’s forces. He defeated the demon king and took possession of the chariot, using it as his vehicle to get back to his kingdom in Ayodhya. It was then handed back to Kubera, who went about fulfilling his usual duties as the guardian of wealth.

The city of Lanka was conceptualized and built by the divine architect Viswamitra, but unfortunately, it was taken over by the Rakshasas. They somehow displeased Lord Vishnu, who decided to attack the city. Fearing the worst, most of the Rakshasas fled and left behind a ghost city, which Kubera managed to occupy and settled there with his retinue. Soon, the Rakshasas appeased Lord Vishnu, and devised a plan to seize Lanka back from Kubera. Meanwhile, Kubera’s father sired three more sons Ravana, Kumbhakaran and Vibhishana. Ravana performed severe austerities to Lord Shiva and earned the boon of invincibility from the God. He wrested the city of Lanka back from Kubera and crowned himself the king.

Kubera was crestfallen and appealed to Viswamitra to build a residence for him, who duly constructed a palace for Kubera in the Himalyan Mountain range. The city of Alakapuri in the mythical mount Mandara was an opulent and magnificent city which Kubera presided over. His fantastic riches allowed him to create many grandiose landmarks in this place, which included gardens and other significant structures.

The legend of Kubera and Parvati

It is said that Kubera, the God of wealth once visited Mount Kailash to obtain Darshan of Lord Shiva and Goddess Parvati. He was awe-struck with Parvati’s beauty and could not take his eyes off her, regretting that he had not worshipped her for so long. One of his eyes shut impulsively upon witnessing the celestial beauty of the Goddess in this Divine form. Parvati was enraged and cursed him, causing his eye to splinter into several pieces. Kubera was mortified and pleaded with Lord Shiva for forgiveness, explaining that he did not wink with any evil intention. Lord Shiva left the choice of forgiving to Goddess Parvati, who regretted her action and blessed him for his eye to grow back. Lord Shiva also granted Kubera with the distinction of being the guardian of the North direction and Parvati blessed him to represent the material form of wealth.

The legend of Kubera and Lord Ganesha

Kubera once invited Lord Shiva and Parvati to dinner, which the couple declined but asked him to feed Ganesha instead. Kubera was proud of his wealth and did not take matters seriously. Ganesha duly came to his house and sat down to eat, proceeding to devour all that was offered to him. Soon enough, there was no more food left at Kubera’s disposal and he was frightened for his life. He ran to Shiva and pleaded for mercy, afraid that Ganesha would eat him too. Shiva advised him to give up his pride and serve Ganesha a handful of rice. Kubera went back to his palace and served Ganesha a cup of rice with humility. This pleased Ganesha immensely and he expressed his inability to eat anymore, indicating his hunger was satisfied.

Perform the Kubera Puja and witness your financial fortunes take a turn for the better, as the God of wealth brings happiness, peace and joy into your life. Enjoy the material comforts and success that you so richly deserve and infuse yourself with positive energy to achieve your goals and ambitions.

Lakshmi Kubera Fire Lab- This Fire Lab is targeted to bless you with luxuries, financial growth and success.

Attract wealth and positive energy by performing the 3-in-1 homa for Kuber-Lakshmi and Swarnakarshana Bhairava.

The legends quote that Kubera is the Banker in Heaven, and he is the God of Yakshas (an exotic tribe of semi-divine beings who guard the wealth of the earth).