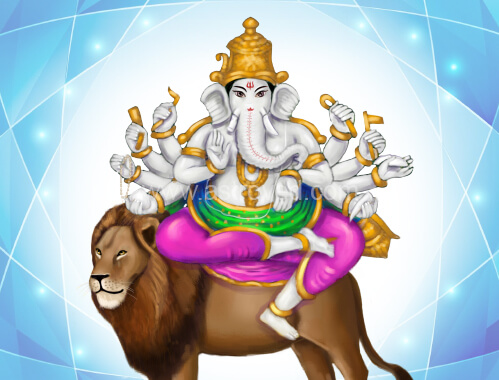 Heramba Ganapati is regarded as the 11th among the 32 different forms of Ganapati. The Sanskrit term ‘Heramba’ is made up of two words, ‘He’ and ‘Ramba.’ ‘He’ indicates ‘weakness’ or ‘helplessness’; and ‘Ramba’ denotes ‘protection.’ He-Ramba Ganapati is thus the compassionate Lord who is the ‘protector of the weak and the helpless.’ This form of Ganesha is unique in many respects. He has five heads and proportionately, ten arms. And he is riding, not his usual Mooshika mount, but the mighty and majestic lion, the king of jungles. He displays the protective Abhaya Mudra pose in his main right hand, and holds in his other hands, his own broken tusk, the japa mala of Rudraksha beads, a garland, his favorite sweet Modak (dumpling), a fruit, a noose, a battle axe, a hammer, and the wish-granting posture.

This form of Ganesha can be seen as a painting in the Kerala capital Thiruvananthapuram and as a sculpture in some temples in Mysore region, where all the 32 Ganapati forms are on display. Heramba Ganapati can also be worshipped in an idol form, in the famous Kasi Vishwanatha temple at Varanasi, in the state of Uttar Pradesh.

Thiruvadhirai Star, also known as Arudra Nakshatra is said to be related to this Ganapati.

Heramba Ganapati is a powerful aspect of Lord Ganesha, who assumes the protective role of a savior God. He is the annihilator of fear, and his worship is believed to give confidence to the weak and hope to the poor.

Offering prayers to him daily with faith can remove anxiety and doubt, and bless people with knowledge, skill, and conviction for achieving success in endeavors.

The mantra, which reads as under in Sanskrit hails this Lord of protection as ‘the five-headed Ganapati riding a lion’, describes his form and prays for his grace and blessings.

Chanting the Heramba Ganapati mantra with faith can be an effective means of propitiating this special form of the Lord.