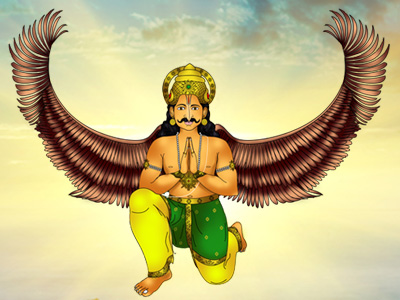 Garuda is a mighty bird of immense power and remains the mount of the great Lord Vishnu, the God of preservation and protection. He is believed to be a legendary bird and is considered as white-necked, belonging to the family of the present day Brahminy Kites. It is considered special to worship Lord Vishnu riding his mount Garuda, and thus Garuda himself has come to be regarded a Godly entity, whom people pray to fervently as archetype Garuda or Garuda Dev.

Garuda is usually depicted in a huge man-eagle form, with a body of gold, white face or neck, well spread out red wings, long, sharp beak, and a crowned head. Many Nagas or serpents are seen encircling various parts of his body.

Garuda is seen as a symbol of great intellect, tremendous power and remarkable courage, who can move mountains and even outshine the Sun. Many institutions including royalty, military, etc. are named after Garuda, as a mark of might, potency and striking power, not only in India but in Southeast Asia too.

Mythology provides an interesting story about the origin and valor of Garuda. He was born as the son of the great sage Kasyapa and his wife, Vinita. Kasyapa was married to Vinita and Kadru, the daughters of the Daksha Prajapati. The sisters desired to have powerful offsprings, and thanks to the blessings of sage Kasyapa, Vinita laid two eggs while Kadru laid a thousand.

While the thousand eggs hatched into a thousand powerful snakes, as Kadru wished, nothing happened to Vinita’s eggs even after a very long time. The impatient Vinita broke open one of the eggs, out of which came the radiant but half-formed and deformed son Aruna. While the mother regretted her misadventure, the unhappy son cursed her that she would become a slave of her sister, and shall remain so until her other son comes to her rescue. Aruna then went on to become Lord Surya’s (Sun) charioteer.

The curse had its effect as Vinita was tricked in a wager by Kadru and her sons and hence, landed up as her sister’s slave. In due course, out of Vinita’s second egg, emerged the mighty and brilliant Garuda, in the form of a massive bird and came to be also known as Vinita Suta, the son of Vinita.

Soon realizing the pathetic condition of his mother, he spoke to his serpent brothers, who demanded nothing less than Amrut, the elixir of immortality as a price for his mother’s freedom. Garuda agreed and proceeded to get the extremely precious liquid, which remained in heaven guarded heavily by the Devas (celestial beings). Garuda fought bravely with all his might, overpowered his well-armed opponents, took the all-important Amrut and flew back to his place. In the process, he earned a few very important admirers including Lord Vishnu , who blessed him with immortality, while Garuda offered to serve the Lord as his mount.

Garuda returned to the serpents with the Amrut and secured his mother’s release from bondage. However, before the serpents could lay their hands on the elixir of life, Indra, as preplanned, swooped on it and took it back with him. The greedy serpents ended up only with split tongues, while trying to lick the droplets that had fallen on the sharp blades of grass, on which the pot of Amrut was placed.

The world hailed the might, courage, heroism and the dedication of Garuda, and started celebrating him as the King of Birds and worshipping him as a mighty God.

Vellamassery Garudan Kavu temple in Kerala is said to be the only temple dedicated exclusively to archetype Garuda, where special offerings are made to him. However, shrines with idols of Garuda can be found in almost all the Vishnu temples right opposite to the sanctum. Garuda Vahana Sevai remains a significant celebration when the processional deity of Lord Vishnu riding his mount Garuda, is offered special worship. It may not be a mere coincidence that Garuda, the white-necked Brahminy Kite is seen on the occasion of some temple festivals and especially at the time of Kumbabishekam (consecration of temples), circling the sky right above the temple towers, gracing the occasion and also representing the divine permit accorded for the ritual.

Garuda is worshipped not only in Hinduism, but also in Buddhism, signifying the importance that he enjoys in the religious domain.

Worshipping Garuda on Sundays prove to be highly beneficial for the devotees. Offering him prayers would ensure removal of negativities and bestow prosperity. It can also help to mitigate skin problems and issues relating to eyesight and provide cure for conditions like insomnia, hypertension, and toxins in the blood.

Garuda Panchami is an occasion observed in honor of Lord Garuda. This falls on the Panchami Thithi, the fifth lunar day of the month of Shravan (July-August) and is also celebrated as Naga Panchami. Women observe austerities on the occasion for the welfare of their children, while married couples perform Poojas for harmonious marital life.