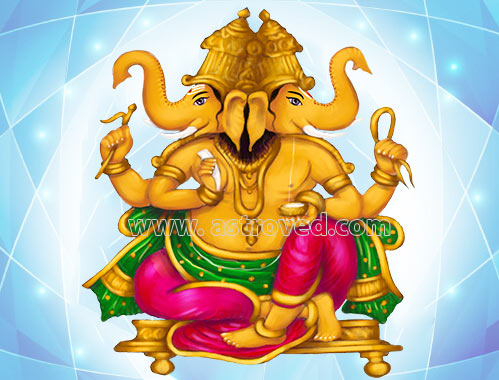 Dvimukha Ganapati is regarded as the 27th among the 32 different forms of Ganapati. The term ‘Dvimukha’ is a combination of two words, ‘Dvi,’ indicating the number two and ‘Mukha,’ meaning ‘face.’ Dvimukha Ganapati is thus the two-faced Lord, who could see not only in two, but in all directions. He is bluish green in complexion and wears attire in red silk, while a well-embellished jeweled crown adorns his head. He has four hands. Holding the broken tusk in his principal right hand, which also assures the devotees of his protection, this elephant-faced Lord has the elephant goad, the noose, and the Ratna Kumbha, the vessel containing precious gems in his other three hands.

This form can be seen as a painting in the Kerala capital Thiruvananthapuram and as a sculpture in some temples in Mysore region, where all the 32 Ganapati forms are on display. However, as an idol form, the Lord can be worshipped in the famous and highly sacred Badrinath temple in the Himalayan regions of the state of Uttarakhand.

Thiruvonam star, also known as Shravana Nakshatra, is said to be related to Dvimukha Ganapati.

Dvimukha Ganapati is a strong aspect of the Lord. It is believed that worshipping him shall please the Lord and bestow divine protection against all harmful forces and dangers. Praying to this Lord with faith can bring success in life and make the devotees victorious in their endeavors.

The mantra, which reads as under in Sanskrit describes his form in complete detail, sings his glory, seeks his blessings and appeals to the Lord to be always kind, gracious and merciful towards the devotees.

Chanting the Dvimukha Ganapati mantra with faith can be an effective means of propitiating the powerful Lord.