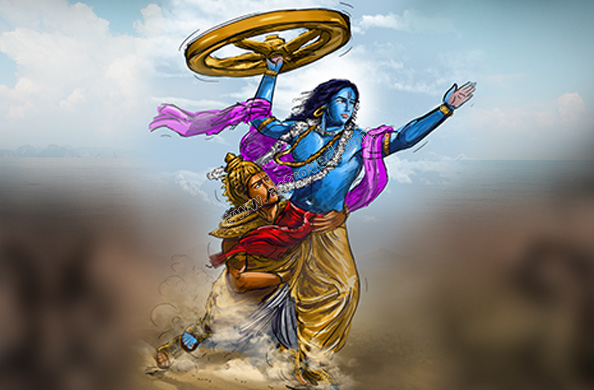 Bhishma is the great hero of the epic Mahabharata. He was an exceptionally skilled archer and warrior, a much-revered elder statesmen and the dear grand uncle of the Kaurava and the Pandava princes. He also remained to be the guardian of the throne of Hastinapura.

Bhishma refers to the one ‘who takes a terrible vow and stands by it, at any cost.’ He made the supreme sacrifice, took a firm resolve, for the sake of the happiness of his father, and stood by it right through his life, facing immense trials and tribulations in the process. Bhishma had also realized that Krishna was none other than the incarnation of Lord Vishnu on earth and gave out the famous hymn Vishnu Sahasranama, consisting of the thousand sacred names of Lord Vishnu, in the presence of Krishna himself, while lying on the bed of arrows, in the battlefield of Kurukshetra.

Mahabharata gives a detailed account of the amazing life and exploits of Bhishma. He was born as Devavrata to king Shantanu and the sacred river Ganges, who is personified as a woman. Brought up by his father, the young prince was well trained by many preceptors, sages, and warriors like Vasishta, Parasurama, etc. and became a versatile master in various fields like Dharma Shastras, the tenets of righteousness, warfare, and principles of governance. Here, his life underwent a dramatic change. To facilitate the marriage of his father with a fisherwoman Satyavati, whom his father intensely desired, Satyavrata took two Bhishma Prathigyas. With the terrible vows, he promised that he shall never marry and would remain a celibate right through his life and that he would never also ascend the throne, but instead, would be at the service of anyone who becomes the ruler. Stunned by the breathtaking sacrifice and astounding resolve of this young man, the heavens celebrated him as ‘Bhishma,’ while his father blessed him with a boon by which Bhishma could choose the time of his death.

The children born to Satyavati and their descendants began ruling Hastinapur. Subsequently, a great hostility broke out between the cousins, the sinful Kauravas and the virtuous Pandavas, which led to a bloody war between them, in spite of Bhishma’s best efforts at mediation. Heartbroken beyond words, Bhishma was forced by his vow to take the side of the ruling Kauravas in the fratricidal war and command their army against the forces of the Pandavas, who were very dear to his heart.

Keeping aside his intense anguish, he fought like a true warrior causing immense damage to the enemy camp. Pandavas, guided by Lord Krishna, had to resort to trickery to bring down Bhishma. On the 10th day of the battle, they made Bhishma come face to face with a warrior named Shikandi, who was born a woman in the previous birth and had vowed to kill Bhishma, whom she thought had wronged her very badly. Realizing who Shikandi really was, Bhishma refused to fight him, and at that opportune moment, he was felled by the sharp arrows of the ace Pandava archer, Arjuna.

Though severely injured and thoroughly incapacitated, Bhishma continued to hold on to his life until the end of the war, lying on a bed of arrows, in the battlefield of Kurukshetra itself. The bloody war came to an end after 18 days of intense battle and saw the total destruction of the Kauravas and the victory of the Pandavas. At last, when he realized that the evil has been wiped out and that his dear land is safe in the hands of the righteous Pandavas, this noble soul ended his momentous journey on this planet on his own will and reached its heavenly abode.

Bhishma symbolized the highest form of resolve, commitment, selflessness, and sacrifice. He is counted as one of the noblest of souls born in our land and is still remembered gratefully, as such. As Bhishma dies childless, people offer Tarpanam (ancestral rituals) to Bhishma and chant the Bhishma Ashtami (8th lunar day, when he passed away) mantra to receive his graceful blessings.

Bhishma waited for the sacred Uttarayana, the period of Sun’s northward movement for ending his life on earth and gave up his mortal coil on Ashtami, the 8th lunar day of Shukla Paksha, the waxing phase of the Moon in the month of Magh (January-February). This occasion falls on the day next to that of Ratha Saptami festival when the Sun God is believed to be turning his chariot towards the northern direction and is known as Bhishma Ashtami. Devotees observe this day with religious fervor, offering worship to Bhishma and observing austerities in honor of that great soul.