Lalitha is the mother Goddess and is regarded as one of the Dasha Mahavidhyas, the ten supreme feminine powers of the world. She is an aspect of the universal mother, Parvathi, and is known by various names, like Shodashi, Tripura Sundari, Lalitha Tripura Sundari and Adi Parashakthi. She is unique, as she possesses the rare combination of remarkable beauty, great wisdom and immense power.

The Sanskrit word ‘Lalitha’ literally means, ‘the lady, who plays’. Lalitha remains as a symbol of prosperity and protection, and also, the embodiment of Shakthi, the universal power. She is generally portrayed as a remarkably beautiful young woman, with a long and flowing hair, decorated with various sweet smelling flowers and adorned in a bright silk sari and ornaments. She is seated on a lotus, holding a pot of honey in one hand and blessing the devotees with the other. She is also shown in some places as many-armed and holding in them mighty weapons like, bow, arrow, trident, sword, mace, axe etc. 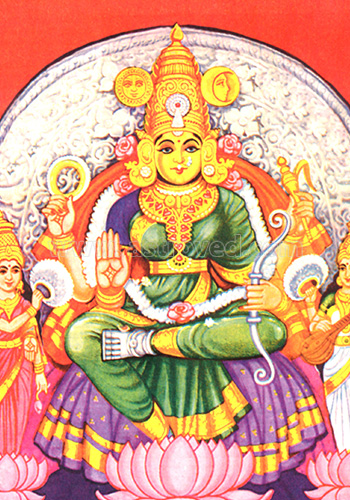 The most famous of legends speaks about the Goddess’ encounter with Bandasura. Once Ganesha is said to have created a demon life figure out of the ashes of Kama Deva, the God of love, who was burnt down by Shiva and gave life to it. This turned out to be Bandasura, the ash-coloured demon. He became the friend and playmate of Ganesha, but later, began showing his true colours of a demon. He began playing serious mischief, burning down mountains and other things, and slowly started creating severe trouble even in Kailash, the abode of Lord Shiva. There he was warned first by Nandi, Shiva’s mount and then by the Lord himself and Goddess Parvati, who pulled him up severely. But he was bailed out by Ganesha and was sent out.

Bandasura felt this as a grave insult and he could not be pacified even when his friend Ganesha came visiting him. Instead of mending his ways, he began denigrating Ganesha and mocking his divine parents. Ganesha explained to him about his origin and cautioned him not to go overboard. But Bandasura ignored him, rejected his friendship, and now began attacking the Devas too. He once again entered Kailash, with a view of harassing its residents. There he again encountered Nandi, Ganesha and Parvathi, who all told him to leave the holy place immediately and save himself. Instead, he started playing havoc there, and attacked Nandi too. This infuriated Parvathi, while Devas too pleaded with her to put an end to the demon’s harassments.

Deciding to end the terror of the demon, Parvathi assumed the imposing form of Lalitha, combining in herself vigour and beauty. Armed herself with various weapons, Goddess Lalitha took on the might of Bandasura in a battle, struck him down with her powerful trident and killed him, thus relieving all of his atrocities. Hence, Lalitha is also hailed as Bandasura Sangharini, the slayer of Bandasura.

Goddess Lalitha is worshipped in her many forms, under various names, by people all over the country. Elaborate ritualistic worships are also offered to her during festivals like Navratri and on special occasions. Lalitha Sahasranama is an extremely sacred religious text, which gives out the thousand names of the Goddess. Praying to the Goddess and also chanting the slokas in praise of her, is believed to bless the devotees with various benefits like wealth, health and a life of fulfillment.

Goddess Durga, also known as Devi or Shakti, is a manifestation of Parvati. The supreme divine feminine archetypal energy is manifested as Goddess Durga to vanquish the demon named Mahishasura.

Lalita Tripurasundari is the goddess that transcends all cosmos and manifests her blessings on all the beings on earth.