Chhinnamasta is a Goddess in the weirdest of forms, who creates an eerie sensation even by her mere appearance. She is one of the manifestations of Kali, the fierce form of divine Shakti, who is also known in many other names such as Parvati,Durga and Bhagavathi.

Kali is also known as AdiParashakthi, the primordial, all-powerful feminine energy and is worshipped in ten forms that are known as Dasa Mahavidyas, the ten Goddesses of great wisdom. Goddess Chhinnamasta is considered the fifth of these ten divine aspects.

What is the significance of Goddess Chhinnamasta? 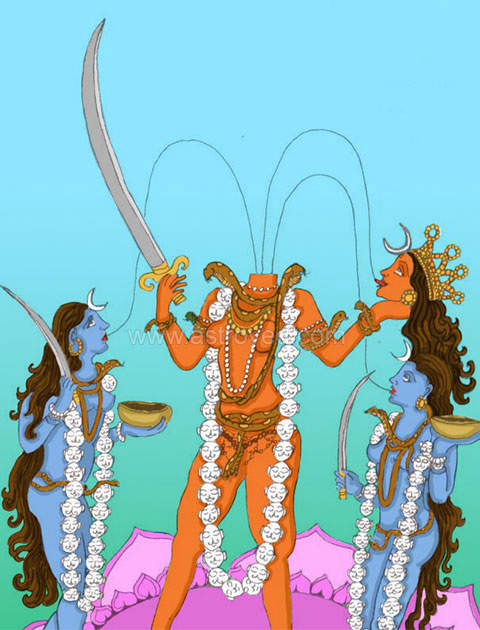 Not merely her form, even her name is quite intimidating. Mastak or Masta means head, and Chhinnamasta is the ‘one, whose head is cut off’ or ‘beheaded’. Not that someone else has dared to severe her head, she has done that on her own, and hence she also remains Prachanda Chandika, ‘she, who has chopped off her own head’.

The headless Goddess stands nude on a passionately entwined couple. She holds her own severed head in one of her hands, and a blood stained sabre in another. Three jets of blood spurt out like fountains from her bleeding neck, of which one is drunk by her own hand held head, while the other two, by her aides.

This Goddess is as enigmatic as she is contradictory. She represents both- life and death, creation and destruction, sexual passion and divine energy, and motherly compassion and a mindless rage, as she remains both, the giver and taker of life. Her self-destructive fury of severing of her own head symbolizes self-sacrifice, as she signifies realization and spiritual awakening.

What are the benefits of worshipping Chhinnamasta?

Chinamasta is a great benefactor, who recognizes and rewards true devotion. Once pleased, she can protect and bless the devotees with all her heart. She can help to overcome various problems like poverty, debt, misfortune, childlessness, mental disturbances and untimely death, and protect them from the ill effects of planet Rahu. She can also bestow knowledge, success, health, wealth and a sense of fulfillment in life.