Shri Balambika is a popular Hindu Goddess primarily worshiped in the South Indian states of Tamilnadu and Kerala. The Goddess is a 9 year old child deity perceived to be the manifestation of Lalitha Tripura Sundari. She is also the child of Sri Lalitha Devi and is considered to be the epitome of knowledge and wisdom. She is depicted as an innocent and beautiful child, but at the same time, she is considered the embodiment of courage and valor, renowned for her battle skills.

Goddess Balambika as the warrior Queen 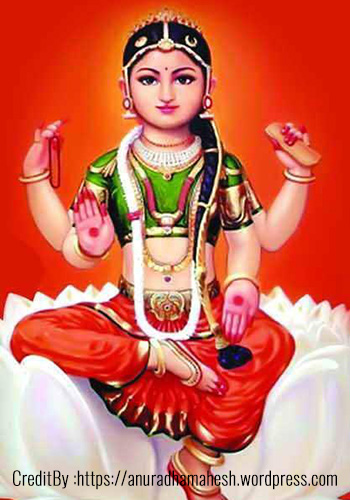 According to legend, the Sakthi army comprising of women were living in a beautiful and well shielded fire-walled fortress. This was guarded by several deities and was considered impregnable. However, a powerful Asura named Bhanda was envious of this habitat and decided to wage war against the forces of Sri Lalitha Devi. Though his strategy to wage war against an army of women could not be condoned in any manner, he was overcome by his desire to capture Sri Lalitha Devi and her armies.

Bhanda and his sons conspired to overthrow the fortress with a powerful demon army. This aroused the ire of the child Balambika and she requested her mother to allow her to teach the demons a lesson in humility. Though her mother was at first skeptical about a child facing such a powerful foe, she ultimately relented upon seeing the courage and determination of her child.

Riding a chariot yoked by swans, the brave child set out to face the fierce demon army, even though the odds were heavily stacked against her. However, her iron will and determination routed the powerful Asura army and sent them scurrying for cover. The Asuras suffered an ignominious defeat against the forces of Goddess Balambika, who then proceeded to kill all the sons of Bhanda, one by one.

Goddess Balambika is depicted with four arms, with and a small circle of Aalta adorns her palms. She is portrayed holding a book which symbolizes knowledge and wisdom in one hand, and a Japa Mala in another which symbolizes spirituality. Her young and radiant face shines with the brilliance of the Sun and her eyes spread a divine light in every direction. Her diamond nose pin dazzles onlookers with its glitter and is revered by devotees as a divine symbol of the Goddess .

Certain schools of thought speculate that Goddess Balambiga nurtured the idea of winning over Lord Shiva and becoming his spouse. She retired to the forest and sat under the shade of a Vanni tree to meditate upon Shiva. Eventually, she won over the grace of the Lord who expressed his willingness to fulfill her desire. However, this was not to be, since the sage Narada Munni intervened and reminded Shiva of his commitments.

Though Goddess Balambika was disappointed, she did not allow this to affect her devotion to Shiva. She remained chaste and pure throughout her life and dedicated herself to worshiping Lord Shiva forever.

Chanting ‘Aim Kleem Sowm’ is said to bring about the blessings of the Goddess. These three words stand for learning, magnetic attraction and abundance. One can resolve all worldly problems by chanting this powerful mantra repeatedly. Teachers and Gurus are advised to educate their students about the efficacy of this mantra. As the Goddess is worshiped in the form of a child, she is the preferred deity of choice for all children. A temple dedicated to Goddess Balambika exists in the city of Bengaluru in Karnataka. The Goddess is said to share a close affinity with those falling under the zodiac sign ‘Cancer’, and those falling under this star sign are advised to worship her for resolving their problems.