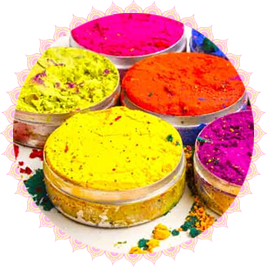 What is Holi Festival?

What is the Significance of Holi Festival? Holi festival is often related to several things; it is considered as a symbol of victory of good over evil, and the arrival of spring and the end of winter. Many people also celebrate Holi as a thanksgiving day for a good harvest. The first day is known as Holika Dahan or Choti Holi. Second day is known as Rangwali holi, Duleti or Dhulivandan.

What is the Mythology Behind Holi Festival?

According to legends, once, the demon king Hiranyakasipu undertook severe penance to gain boons from Lord Brahma. Pleased by his devotion, Lord Brahma appeared before him. In order to gain immortality, he asked a boon with many conditions. Equipped with a special boon, Hiranyakasipu tortured everyone to worship him. But his son Prahlad disagreed and worshipped Lord Vishnu. Angered by his son’s disobedience, he decided to kill him. He ordered his sister Holika to step into the fire, since she had the boon of not getting burnt. Holika and Prahlad sat into the fire, Prahlad began to pray. Holika was burnt to death, Prahlad emerged safely. This bonfire symbolizes the fire that burns ego, wrongdoings and other negative intentions and deeds. So the event is celebrated as a triumph of good over evil. The tradition of creating bonfire is followed to mark the purification of the society and relief from negativities.

How is Holi Festival Celebrated?

In north and western India, several regions celebrate Holi festival for two days. The first day of Holi is celebrated by Holika bonfire, where devotees gather and perform rituals in front of the fire. The fire is symbolized as a holy fire which destroys inner evils. The following day is celebrated as a day for spreading joy and happiness, where people, regardless of age, smear color powder and water on friends and relatives. Apart from this, several traditions are prevalent throughout the holi festival in the country. In the region of Brij (Uttar Pradesh) a playful traditional game is practiced, where men carry shields and women chase to beat the shield with long sticks. This event is called as Lath Mar Holi. The event tries to depict the legendary tale, where Lord Krishna visited Radha, playfully teased her. But the villagers took offence and he was chased. Another tradition of pot breaking is followed in western India. In Gujarat, the legend of Lord Krishna stealing the butter with his friends is depicted as game. A pot of buttermilk is hung several feet above. Boys form human pyramids to break, while girls pour colored water to stop them. The boy who manages to break the pot is crowned the Holi king.