The Somnath temple is one of the twelve Jyotirlingas in India where Lord Shiva appeared as a fiery column of light. It is a major pilgrimage and tourist attraction located in the state of Gujarat (Saurashtra), on the western coast of India. The shrine houses the infinite symbol of Shiva in the form of a Lingam, which has no beginning and no end.

Several legends are associated with the temple and many ancient texts like Shreemad Bhagavat, Skandapuranam, Shivpuran and Rig Veda refer to it as one of the most hallowed pilgrimage sites. Lord Shiva’s manifestation as the primary deity adds to its eternal mystique and makes it one of the most revered shrines in the country. This temple has served as a source of inspiration for millions of Hindus, and is aptly referred to as ‘The Shrine Eternal’ in the book of K. M. Munshi for its ability to overcome the vagaries of time. 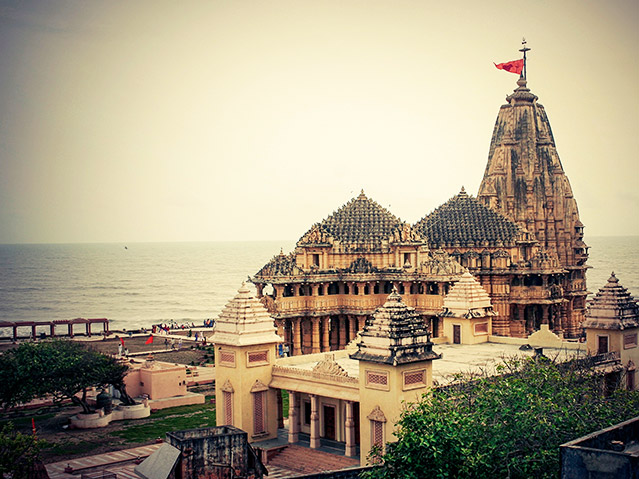 This holy Hindu site has maintained its position as one of the most important pilgrimage sites from ancient times and is believed to be at the confluence of three rivers. Several foreign invaders have attempted to destroy it, but it has always risen again due to the patronage of Hindu kings who spared no effort in restoring and renovating it. Muslim invaders also have tried desperately to break the spirit of the Hindu populace by attempting to raze the temple, but have always been unsuccessful. The present structure was built in a period of five years as recently as 1947 to 1951 and inaugurated by the then President of India Dr. Rajendra Prasad.

The name Somnath means ‘The protector of the Moon God’ and is believed to have been built by Soma, the Moon God himself. He constructed a Shivlinga at the site and prayed to Lord Shiva to manifest Himself at the spot. Shiva is said to have responded to his pleas and blessed the spot, thereby rendering the site sacred. Thus, Shiva is the residing deity of the temple and His symbol ‘The Lingam’ is worshipped here as the fount of life, which also explains why the temple is considered as old as creation itself.

The present structure is built in the Chalukyan style of architecture and the Sompura Salats, Guajarat’s master masons, have left an undeniable imprint of their skills in the construction of this impressive holy edifice. The main spire is 15 meters in height, graced with an 8.2 meter flag pole at the top. The shrine is built with such precision that there is no landmass anywhere in a straight line between Somnath and Antarctica. This highly unique attribute underlines the significance of the shrine as a religious center and pays tribute to the excellence of the craftsmen.

Benefits and Blessings of the primary deity in Somnath

People throng the temple premises on several religious occasions and the temple is considered as one of the most revered pilgrimage centers of India. Taking a dip in the auspicious Someshwara Kunda inside the temple is believed to confer health and rid one of all diseases. Many frequent the tank for months on end to take advantage of the healing powers of the holy waters. Devotees flock to the temple to receive the blessings of Lord Shiva who is said to confer health, wealth and prosperity to all those who worship here.

Location – How to reach Somnath temple

Located in Prabhas Patan, near Veravel in Saurashtra on the western coast of Gujarat, the Somnath temple is accessible by air, rail and bus from all major cities of India.

By Air: Somnath is linked to the rest of the country via Keshod Airport which is located 50 kms away. Regular flights from Mumbai and other cities ply on this sector.

Diu Airport is also located at about 63 km away from Somnath.

By Rail: Somnath is well linked by rail to all major cities of the country with trains plying frequently at regular intervals.

By Bus: Somnath is very well connected with adjoining cities and states by regular bus services.

Local Transport: The Temple is easily accessible by taxis, local buses and autorickshaws.