Introduction about the Ellora Caves

The Ellora Caves are located in the Indian state of Maharashtra and consist of a vast complex of Hindu, Jain and Buddhist temple monuments. This series of magnificent rock-cut monastery temple caves, numbering over a hundred, is one of the largest in the world; with currently about thirty four open to the general public. One of them is the Kailash temple, dedicated to Lord Shiva and in the shape of a chariot. This imposing structure is the largest rock excavation in the world and made of a single block of stone. The panels in the temple feature various Hindu Gods and Goddesses of the Vaishnav and Shaiva sect. The presence of diverse monuments and artwork depicting the major Indian religious identities prevalent in that era, also indicate the religious harmony which was widespread across most of ancient India. The complex was designated as a UNESCO World Heritage Site from 1983 and a protected monument under the Archaeological Survey of India. The Ellora caves, along with the Ajanta caves are a major tourist destination and attract visitors from all over the Globe. 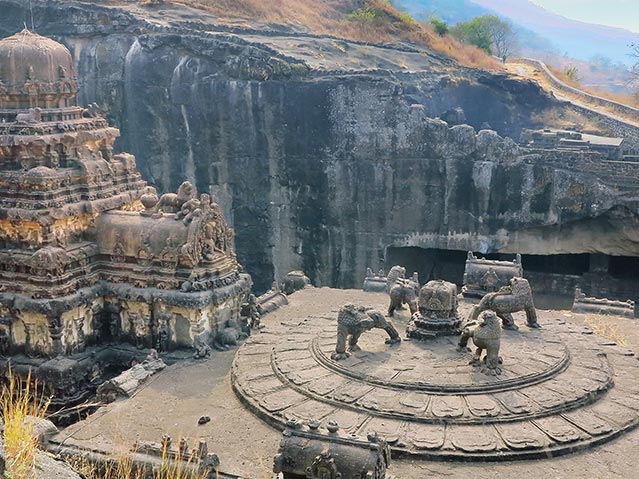 History of the Ellora Caves

Work on The Ellora Caves is believed to have been taken up during the 6th and 10th centuries, sometime after the Ajanta caves which are located about 100 km away, were abandoned. Carved out of the vertical face of the Charanandri hills; this impressive complex was built when Hinduism was on a resurgent mode and Buddhism was on the decline. Most of the work was carried out under the patronage of the Chalukya and Rashtrakuta kings who are credited with building the spectacular Kailasa Temple. Gradually, the focus shifted to the Digambara Jain style sometime in the 10th century, which explains the multifarious nature of the complex. The caves were regularly frequented by Buddhist monks and served as an important religious and commercial center in the Deccan region, prominently located on an ancient trade route.

Significance of the Ellora Caves

The presence of Buddhist, Jain and Hindu artwork overlapping each other obscures the fact of which structures were sculpted first. However, chronological evidence indicates that the caves were built in Hindu, Buddhist and Jain styles in the sequence mentioned. The Hindu caves were built by the Traikutakas and Kalachuri Chalukya dynasties, the Buddhist caves by the Chalukyas and the Jain caves by the Rashtrakutas and the Yadavas in later days.

Architecture of the Ellora Caves

Out of the 12 Buddhist caves, eleven, feature Viharas or monasteries with carvings of Gautama Buddha, Bodhisattvas and saints. There are also living quarters and sleeping quarters, kitchens and other rooms.

This cave complex features a Buddha statue in an expansive hall which also has refectory benches. The Kanheri Caves are unique and the only kind which exist in India. The Visvakarma Cave features a Buddhist prayer hall and is also referred to as the ‘Carpenters Cave’. It features a Stupa hall and a 15-foot statue of Buddha seated in a preaching pose.

The Hindu Caves in the complex are dedicated to Lord Shiva, but also feature several other shrines. All the caves feature a Lingam cut out of rock and the Dhumar Lena cave also has a natural waterfall which symbolizes the River Ganga. The Rameshwar Lena Cave was one of the earliest to be excavated and has several carved panels and artwork. Shiva and Parvati, along with Kartikeya and Ganesh are depicted in this cave.

The Kailash temple is a marvel of architecture and carved out of a single block of rock. It features a gateway, an assembly hall and a Sanctum Santorum, along with several other shrines. This vast multi-storied temple complex was painstakingly carved out of 200,000 tonnes of basalt rock.

The Hindu complex also includes a Dashavatara Cave dedicated to Lord Vishnu and depicts him in his various incarnations.

The Ravan Ki Khai, and the Nilkantha caves are the other prominent Hindu caves in the Ellora complex.

The Jain Caves are smaller in size to the others and dedicated to the Digambara sect. Exquisitely detailed artwork is prevalent in all the Caves which feature panels and artwork from the Jain sect.

The Indra Sabha, Chhota Kailasha and The Jagannatha Sabha Caves are the other prominent structures in this complex.

Location – How to reach the Ellora Caves

The Ellora Caves in the state of Maharashtra are about 29 km away from Aurangabad, 300 km from Mumbai and around 100 km from the Ajanta caves.

By Air: The nearest Airport is in Aurangabad

By Train: Aurangabad and Jalgaon are the nearest Railway Stations.

Buses and taxis are available to take one to the Ellora Caves.